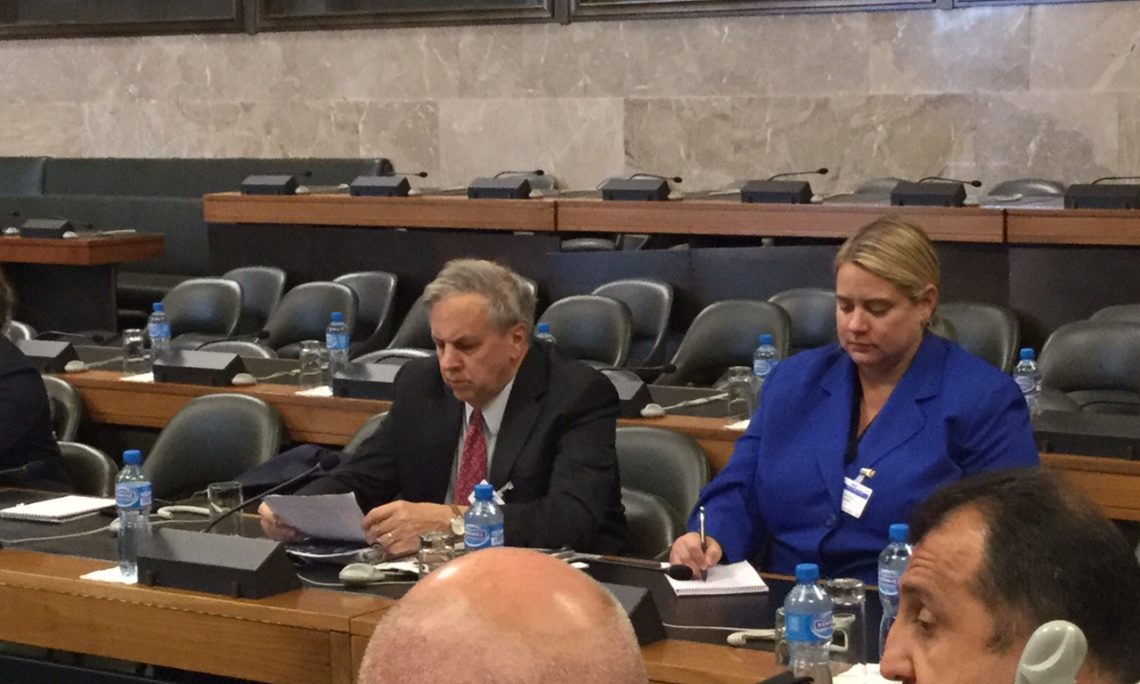 Ambassador Kelly at the Geneva International Discussions on the Conflict in Georgia. Photo: State Dept

U.S. Participation in the Geneva International Discussions on the Conflict in Georgia (October 11)

Press Statement by the U.S. Delegation

At the forty-first round of the Geneva International Discussions on the conflict in Georgia October 10-11, the United States expressed its continued objection to the closure of two controlled crossing points along the Abkhaz Administrative Boundary Line (ABL), and the continued placement of physical barriers and demarcation signs along both the Abkhaz and South Ossetia ABLs, in violation of Georgia’s sovereignty and territorial integrity.  The United States stressed that these actions restrict freedom of movement and damage the livelihoods of local residents.

The United States also stated its objection to the demolition of hundreds of Georgian homes in the Eredvi village in South Ossetia, noting that Georgians have a right to return to their homes.  The United States also expressed its continued concern with the Abkhaz decision to suspend prosecution of a suspect in the killing of Georgian citizen Giga Otkhozoria.  Decisions such as these threaten to undermine the trust built up through the resumption of the Incident Prevention Response Mechanisms and undermine the Geneva International Discussions as a whole.

The United States encouraged the parties to continue constructive negotiations aimed at achieving a mutually agreeable statement on the non-use of force during the next GID round.  The United States also called on the parties to work together to identify comprehensive solutions to issues impacting the lives of residents on both sides of the ABL, including the Brown Marmorated Stinkbug and its potential devastating impact on agricultural harvests.

The United States regrets that the two working groups were not able to complete discussion of their agendas, including a discussion of internally displaced persons, because of a walk-out in working group II.  The United States urges participants to look for practical steps forward to resolve humanitarian issues, including the core issues of internally displaced persons during upcoming rounds of negotiations.

Together with Georgia, Russia, and representatives of the de facto authorities of Abkhazia and South Ossetia, the United States participates in the Geneva International Discussions, which are co-chaired by the EU, UN, and OSCE, and began in 2008 to address the consequences of the conflict in Georgia.
The United States fully supports Georgia’s territorial integrity, independence, and sovereignty within its internationally recognized borders.