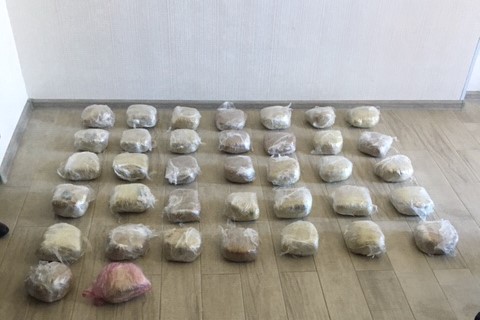 On April 26, 2020, the U.S. Drug Enforcement Administration (DEA) Tbilisi Country Office counterparts at the Georgian Ministry of Internal Affairs Central Criminal Police Department (CCPD) conducted a search and arrest warrant at a residence in Batumi, Georgia and seized 40 kilograms of heroin and arrested two Bulgarian nationals, Dian MINKOV and Vladimir TSIPISHTUK.  The heroin was initially stored in a hidden compartment in a Mercedes-Benz (Bulgarian license plate A0497HP) but later moved inside a residence, where it was stored for further transportation to the Netherlands.  This internationally coordinated investigation has been ongoing for several months and included the seizure of 75 kilograms of heroin in Burgas, Bulgaria on March 30, 2020, by DEA Sofia and Bulgarian counterparts.  In conjunction with DEA Sofia, DEA Tbilisi worked with Armenian counterparts to identify the heroin stash location in Yerevan, and with CCPD, who arrested the driver of the 75 kilograms heroin load, Vladimir BOBOTANOV, in Tbilisi on April 2, 2020.  Since that time, CCPD conducted surveillance on MINKOV and TSIPISHTUK in Batumi and determined heroin was being stored inside the residence.  The heroin is valued at approximately $2 million U.S. dollars.