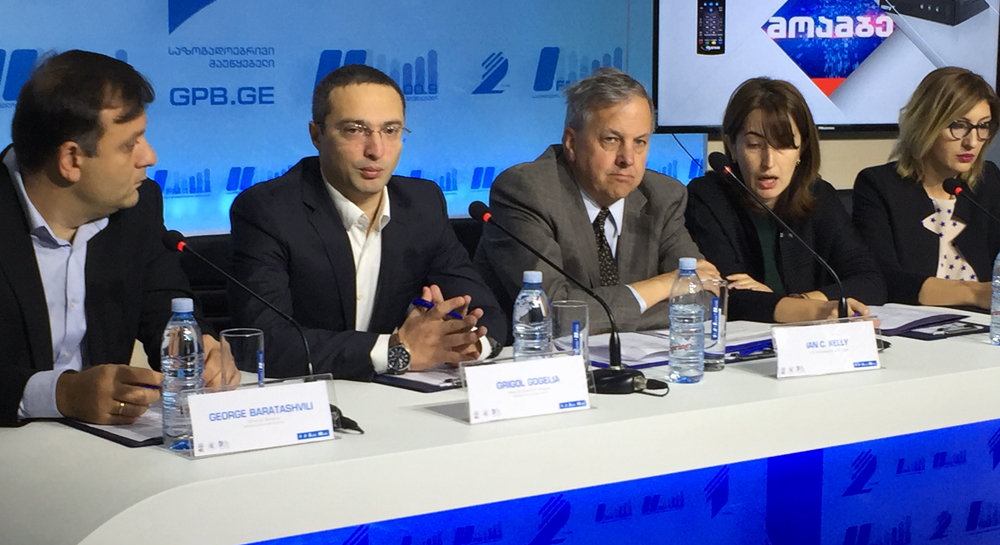 Ambassador Kelly’s comments to the media made at the Georgian Public Broadcaster. Photo: State Dept

Ambassador Kelly: The United States Embassy agrees with the assessment of the international observers, the OSCE’s Office of Democratic Institutions and Human Rights, that the elections were competitive and well-organized and largely respected fundamental freedoms.  I think, in the vast majority of polling places voters were able to freely express their opinion and express their will.  We very much regret that in the number of polling places, including down in Marneuli, there was violence in an attempt to intimidate voters and we very much condemn these incidences;  and we, of course, hope the government will thoroughly investigate the circumstances of these incidents.  I think that it’s really important to keep in mind that this is the first step – the proportional voting.  And, we would urge all parties to address any kind of concerns they have about these incidents, for example, in a calm and peaceful manner in accordance with Georgian law and, of course, we’ll continue to monitor the electoral campaign as we proceed towards the second round.

Ambassador Kelly: As I have said, we very much accept the assessment of the OSCE and other international observers that this election was run in a good manner and that the vast majority of the Georgian voters were able to freely exercise their choice.  And, we, as I have said many times, we very much support Georgia and its development and a very important part of this development, democratic development,  is a multi-party pluralistic democracy.  And, I think, that the UNM ran a good campaign and they should feel proud of the campaign that they conducted and I would very much expect them to approach this situation in a calm and peaceful way and take their seats when the time comes.  But, of course, we are still involved in the campaign right now.  We would hope they would compete as professionally as they did in the first round.

Q-n about the Free Democrats and announced departures

Ambassador Kelly: Well, it’s democracy and it’s a very competitive environment and as I said, we thought the elections were well-run and I would hope that the capable politicians in the Free Democrats would continue to contribute in the political process here.

Ambassador Kelly: This is a wonderful project.  We are very happy to support it.  I think it is a real indication that Georgian society really does want to make sure that all of its citizens are informed and, I think, this project is a good step forward in this regard.