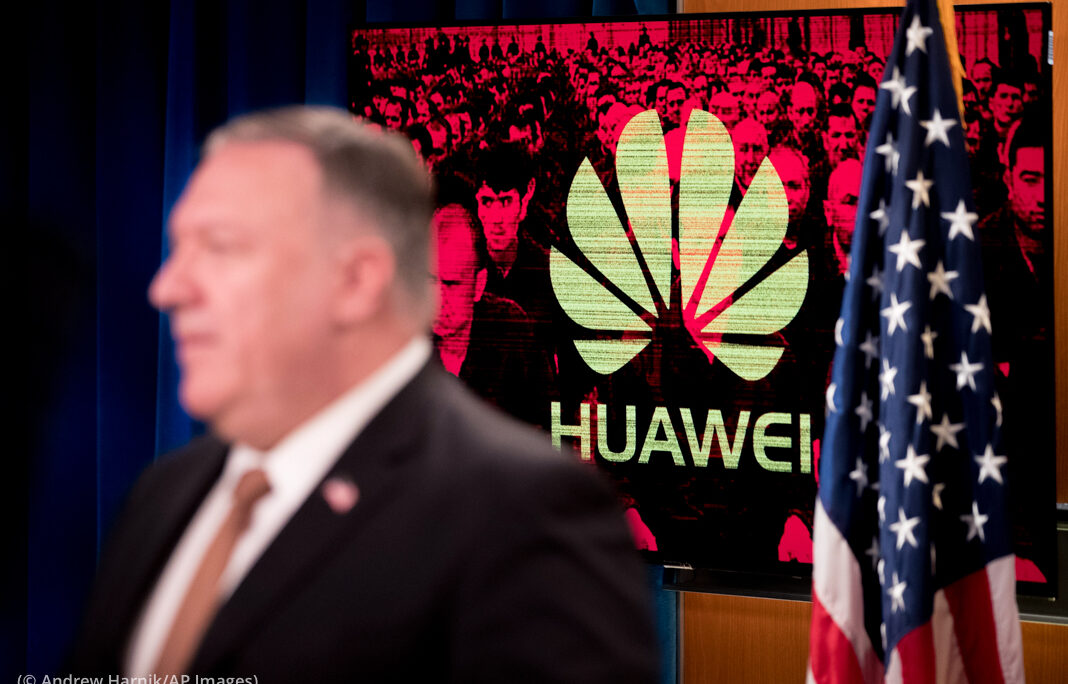 A monitor displays the logo for "Huawei" behind Secretary of State Mike Pompeo as he speaks during a news conference at the State Department in Washington, Wednesday, July 15, 2020. (© Andrew Harnik/AP Images)

The United States has issued new guidance to help companies ensure their security technologies are not co-opted by repressive regimes and used to violate or abuse human rights.

The new guidance provides companies with precautions to consider before selling certain technologies and offers recommendations to mitigate the risk of human rights violations or abuses when sales go forward.

“There is a vast difference between the use of such applications to gather data that can be used to exert social, economic, or political control, and the use of such data to enhance the lives and security of people,” Busby said.

“Only by working in partnership with U.S. businesses can those of us on the side of promoting high standards and values safeguard against such misuse.”

The Chinese Communist Party uses private-sector surveillance equipment to aid its oppression and monitoring of Uyghur and other ethnic and religious minorities in Xinjiang. The CCP also exports digital surveillance tools to help other authoritarian regimes track and punish citizens for peacefully expressing their views.

Iran’s regime has spent at least $4.5 billion to build a domestic intranet that would further tighten restrictions on everyday Iranians’ internet access.

The State Department guidance, which provides recommendations on how to implement the United Nations Guiding Principles On Business and Human Rights, warns that governments or companies associated with authoritarian regimes could use legitimate services or software for repression.

The guidance cites thermal cameras, social media analysis tools, and DNA sequencing kits as examples of products that could pose a risk for human rights violations or abuses. Red flags for sales include when a country lacks an independent judiciary, forces private firms to share sensitive data or has a history of human rights abuses, according to the guidance.

The U.S. government in July released the Xinjiang Supply Chain Business Advisory and issued an open letter to business leaders warning of the legal, economic and reputational risks of doing business with Chinese firms that support the CCP’s campaign of forced labor, mass internment and repression against Uyghur and other ethnic and religious minorities.

“Technological leadership from U.S. business has never been more important,” Busby said. “We must continue to advance innovation that complements our approach to human rights.”