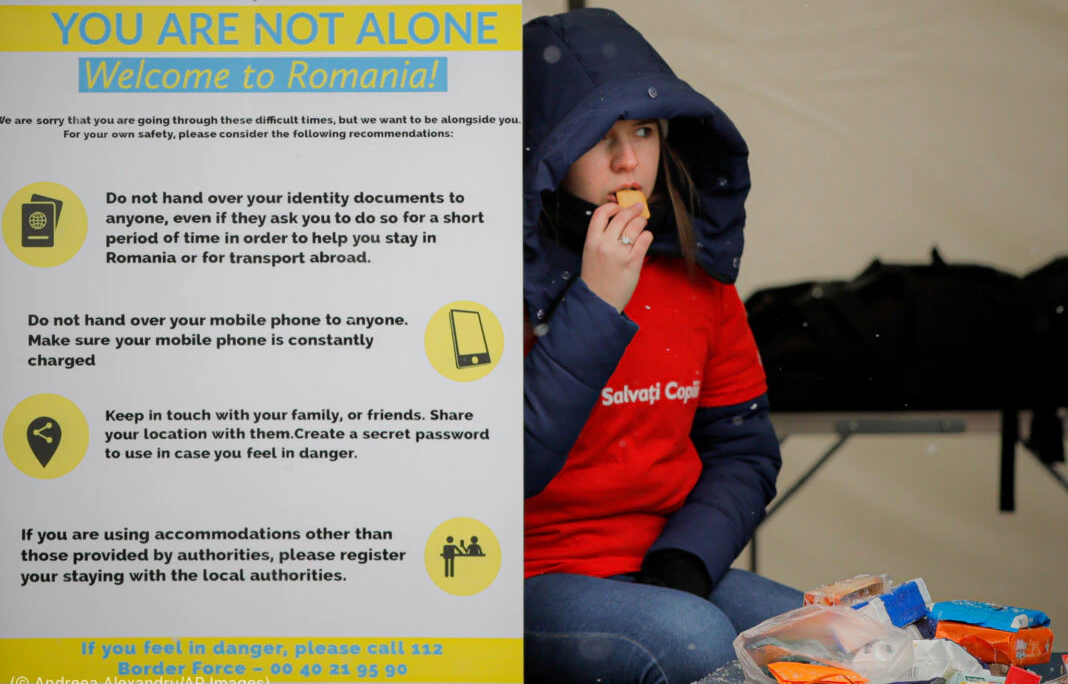 A volunteer with the humanitarian group Save the Children sits next to a banner at the Romanian-Ukrainian border in Siret, Romania, on March 7. (© Andreea Alexandru/AP Images)

Human traffickers continued to exploit vulnerable and marginalized communities in 2021 and 2022, according to the latest U.S. Department of State Trafficking in Persons Report, released July 19.

“The scale of this problem is vast,” said Secretary of State Antony Blinken, announcing the report’s findings July 19 at the State Department, noting that nearly 25 million people are currently victims of trafficking. “The United States is committed to fighting it because trafficking destabilizes societies, it undermines economies, it harms workers, it enriches those who exploit them, it undercuts legitimate business, and most fundamentally, because it is so profoundly wrong.”

“We are deeply concerned about the risks of human trafficking faced by individuals internally displaced by the war, as well as those fleeing Ukraine, an estimated 90 percent of whom are women and children,” Blinken says in his introduction to the report. “The food insecurity and other broader effects of Russia’s war exacerbate trafficking risks around the globe.”

To celebrate those who help combat human trafficking in their home country, the report also honors six Trafficking in Persons Report Heroes, five of whom will participate in the State Department’s International Visitor Leadership Program to engage with American communities and organizations committed to ending human trafficking:

Mohammed Tariqul Islam started the Bangladesh branch of Justice and Care, the U.K.-based nongovernmental organization (NGO), in 2017. He has led other anti-trafficking organizations to help more than 2,000 trafficking victims to get the services they need. Islam, who currently serves as Justice and Care’s country director, has also organized cross-border consultations between Bangladesh and India to collaborate on victim repatriation efforts.

Major Mohammad al-Khlaifat leads the countertrafficking unit of the Jordanian police’s Public Security Directorate. He works to strengthen cooperation between Jordanian government agencies and international NGOs. Al-Khlaifat assisted the collaboration between the Ministry of Social Development and the Jordanian Women’s Union, a women’s shelter, to ensure trafficking victims received protection and support services. He has also guided police liaisons in refugee camps to screen for human trafficking.

In post-conflict Liberia, Judge Cornelius Wennah helped improve the country’s anti-trafficking record. He was sworn in as a resident judge earlier this year. He was previously head of felonious crimes and served as a prosecutor in the Ministry of Justice. In these roles he has investigated, prosecuted and advised on anti-trafficking matters. Wennah also developed a trafficking bench book for judges and a handbook for law enforcement and prosecutors on best practices for human trafficking cases.

Irena Dawid-Olczyk is a human rights activist and president of La Strada–Poland. La Strada is a European NGO platform against human trafficking. La Strada–Poland, based in Warsaw, works with the Polish government to provide assistance to trafficking victims. Since the beginning of the refugee crisis on the Poland-Ukraine border in February, the organization has prepared guidelines with basic safety rules for refugees from Ukraine and staffed a hotline to respond to dangerous situations that could be connected to human trafficking.

Apinya Tajit is the deputy director of the Stella Maris Seafarer’s Center, an NGO in Thailand that provides services and support for Thai fishing industry workers. Tajit educates fishermen from Thailand, Indonesia, Cambodia, Burma and Bangladesh about how to spot trafficking at sea. Tajit also provides assistance to Thai authorities in the victim-identification process and helps victims reintegrate into society.

Kateryna Cherepakha is the president of La Strada–Ukraine. Since the start of Russia’s war against Ukraine, La Strada’s hotlines have seen a huge increase in calls. Under Cherepakha’s leadership, thousands of Ukrainians have been able to access crucial information to keep themselves safe from trafficking and exploitation.