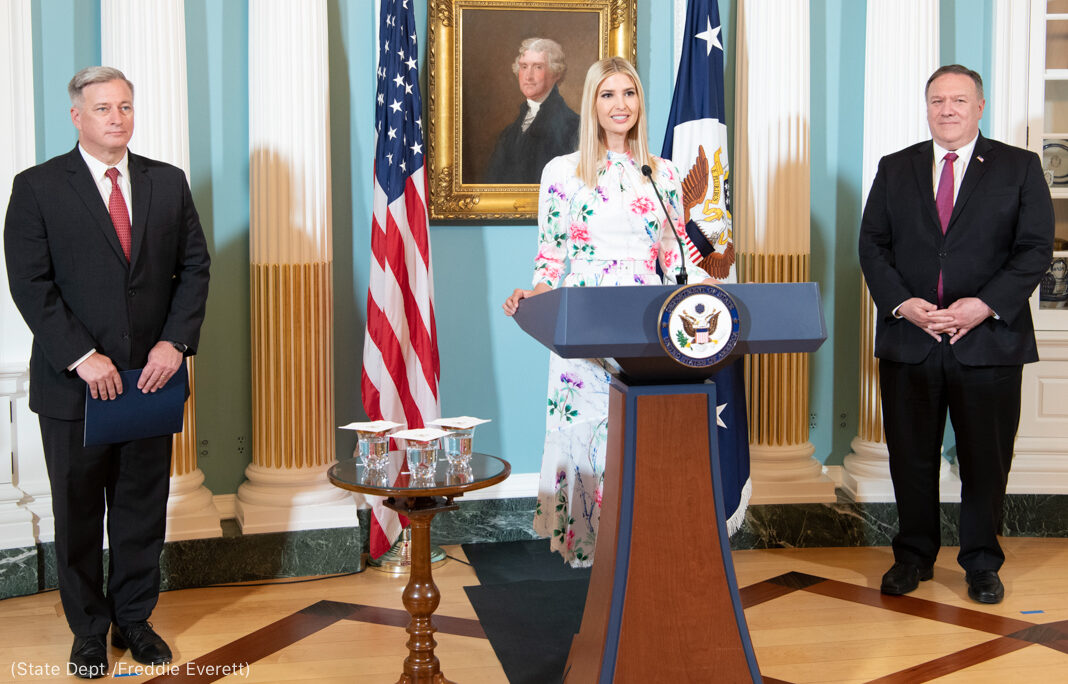 Advisor to the President Ivanka Trump speaks during the launch of the 2020 Trafficking in Persons Report on June 25 at the U.S. Department of State. (State Dept./Freddie Everett)

Honoring heroes in the fight against human trafficking (June 29)

The 2020 Trafficking in Persons Report, released June 25, assesses 188 countries and territories, including the United States, on their efforts to combat human trafficking.

Human trafficking is “a truly wicked act,” he said.

China is forcing people to work in its Belt and Road Initiative around the world, in addition to its well-known detention and forced labor of Muslim minorities in Xinjiang. Forced labor in Cuba’s government-run medical missions may affect up to 50,000 doctors operating in more than 60 countries.

The report also found a number of countries are offering suspended sentences or fines instead of prison sentences. This results in no meaningful punishment for convicted traffickers.

At an event marking the report’s release, Pompeo, Advisor to the President Ivanka Trump and Ambassador John Cotton Richmond, who leads the State Department’s Office to Monitor and Combat Trafficking in Persons, recognized 10 individuals as Trafficking in Persons (TIP) Report Heroes for their work to combat human trafficking:

Lieutenant Colonel Karma Rigzin is a leading advocate in the fight against trafficking in Bhutan. She elevated the investigation of human trafficking to a central objective of the Royal Bhutan Police’s Woman and Child Protection Division she leads.

The work of Ary Varela, a public prosecutor, and Natalino Correia, a member of the Judiciary Police, brought about Cabo Verde’s first official case of human trafficking in which the government prosecuted defendants for human trafficking crimes.

Reda Shoukr helps hundreds of trafficking victims in Egypt each year obtain legal aid, social services, psychological support and vocational training through the Al-Shehab Institute for Promotion and Comprehensive Development that she founded.

While representing trafficking survivors as a public law practitioner since 2015, Patricia Ho raised awareness of the need for a human trafficking law in Hong Kong and advocated for better treatment of victims.

Nina Balabayeva established and funded a nongovernmental organization in Kazakhstan dedicated to combating human trafficking and serving as a shelter for human trafficking victims that has helped more than 16,000 people.

Sophie Otiende established structures for the first shelter dedicated exclusively to victims of trafficking in Kenya and led the development of regional principles of practice for assisting victims of trafficking. She has assisted more than 400 victims since 2014 inside and outside Kenya.

As a major driving force behind passage of Malawi’s Trafficking in Persons Act in 2015, Maxwell Matewere continues to advocate for its full implementation. He founded a nongovernmental organization dedicated to advocacy, research and protection of children’s rights.

Oxana Alistratova of Moldova, who nearly became a victim of human trafficking, founded the first nongovernmental organization to raise awareness of human trafficking in Transnistria while convincing local officials to pass laws against trafficking. She manages a hotline for trafficking victims and another for victims of domestic violence.

“This year marks a milestone in our fight against trafficking in persons,” said Ivanka Trump, noting that 20 years have passed since the Trafficking Victims Protection Act became law. President Trump and the administration are deeply committed to continuing “the fight against human trafficking in all of its grotesque and evil forms.”