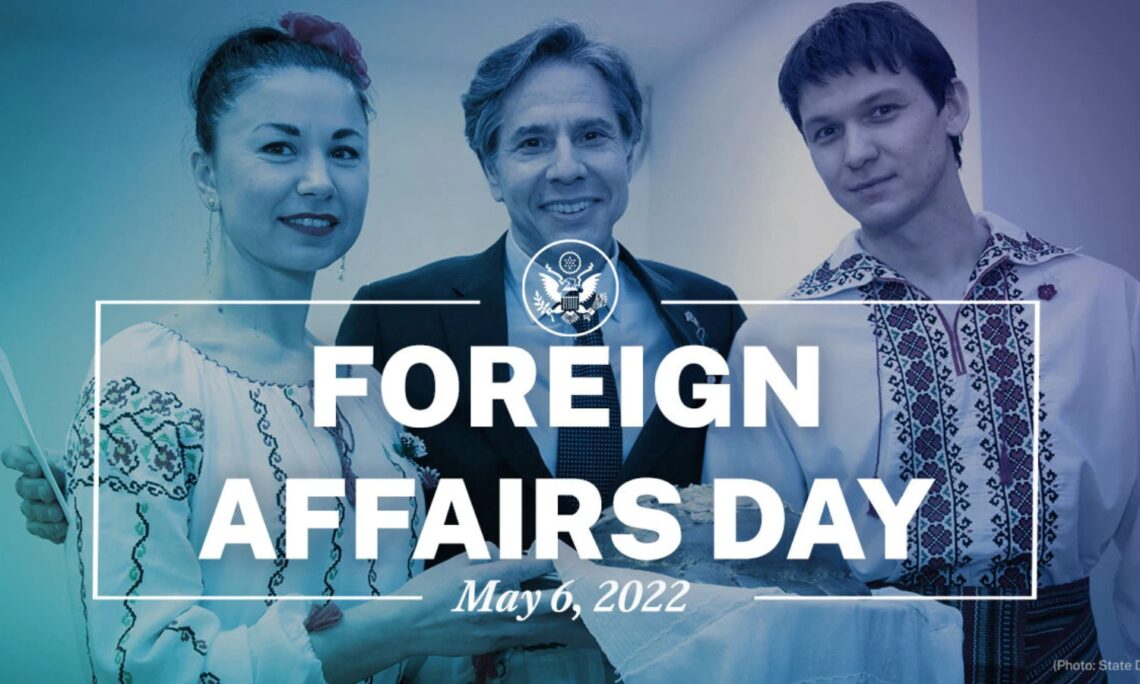 Hosted by the Director General of the Foreign Service and Director for Global Talent, Carol Z. Perez, this year’s commemoration was a virtual event, with presentations by Deputy Secretary Wendy Sherman, current and former employees joining from all over the world, and a wreath laying ceremony presided over by the Deputy Secretary for Management and Resources Brian McKeon at the American Foreign Service Association’s memorial wall to honor the women and men who have lost their lives in service to our country.

One of the most cherished Foreign Affairs Day traditions is the presentation of the Director General’s Cup to recognize the career and contributions of a distinguished, retired member of each service. The Director General’s Civil Service Cup and Foreign Service Cup, as the awards are known, are bestowed upon individuals who embody the highest ideals of public service.

This year, the Director General’s Civil Service Cup was awarded to John Robinson, former Director of the Office of Civil Rights and Chief Diversity Officer for the Department of State (2008-18). Director Robinson’s four-decade public service career began in uniform as a naval officer in Vietnam and would go on to take him to the Departments of Transportation and Energy, the Office of the Director of National Intelligence, and ultimately the Department of State. Director Robinson devoted his career to labor rights and issues of equal access and equal opportunity, all of which were central to his role as primary advisor to the Secretary on EEO issues, diversity and inclusion, and affirmative employment.

A longtime colleague said of John’s vision and leadership at the Department: “John knew that the Office of Civil Rights would never succeed in its mission if its only function was one of enforcement, so he ensured his staff conveyed the righteousness of their cause… [He] insisted that everyone had a contribution to make and [believed that] not taking advantage of every contribution undermined the national security mission of the State Department.”

Few people have had as profound an impact on the Department in the last half century as the recipient of this year’s Foreign Service Cup, Ambassador Patrick Kennedy. From his early days as what was then called a “rover,” an administrative coned officer, to the ranks of the Senior Foreign Service and the role of Under Secretary for Management, a position he held for 10 years under three different Secretaries of State and two different Presidents, Ambassador Kennedy was singularly focused on ensuring the Department empowered our people so they could deliver for the American people.

Ambassador Kennedy played an instrumental role in some of the most challenging operations the Department undertook following September 11. In 2003, he helped establish the U.S. presence in Iraq as Chief of Staff of the Coalition Provisional Authority. Later in 2004, as Chief of Staff of the Transition Unit in Iraq, he helped transfer sovereignty to a newly-installed Iraqi government that was more representative of and responsive to its citizens.

Diplomats are not given to using adjectives like “indispensable” to describe their colleagues, but with Ambassador Kennedy it’s more than appropriate. Three very different Secretaries of State—Rice, Clinton, and Kerry—knew that whatever the crisis, whatever the challenge, the management of the Department was in the most capable hands. They also knew he cared. He cared about the welfare of our workforce and their families, about being a responsible steward of taxpayer dollars, and about maximizing Department resources and ensuring their effective use on behalf of our country.

As Director General Perez noted in her presentation of his award, “Ambassador Kennedy’s distinguishing characteristic was always his limitless compassion and accessibility. [He] is always ready, willing, and able to give back.” And he continues to do so. Though he retired in 2017, last year when the Department needed him, he didn’t hesitate to serve temporarily as Senior Advisor for United Nations Management and Reform at the U.S. Mission to the UN while the U.S. Representative awaited confirmation.

This year’s honorees are public servants in the truest sense of the word and an inspiration to current and future generations. They have demonstrated an unfailing commitment to our nation’s highest ideals. We’re proud to call them colleagues and congratulate them on this achievement.

About the Author: Lourdes Cue serves as Deputy Director for the Bureau of Global Talent Management’s Strategic Communications Unit at the Department of State.