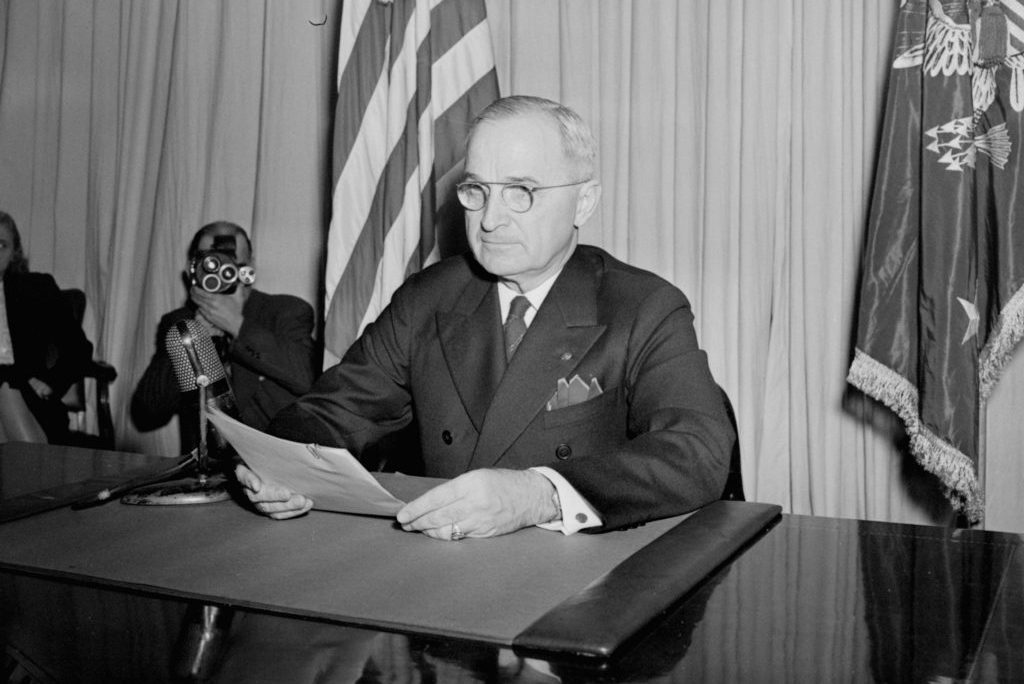 Truman speaks from the White House on May 8, 1945, to announce that the Allies had won unconditional surrender from the Germans. (© AP Images)

Victory in Europe (V-E) Day, when the Allied countries of World War II accepted the surrender of Nazi Germany, was celebrated as a festive holiday in many parts of the world.

The occasion sparked unbridled, emotional public celebrations on May 8, 1945, in much of Europe, North America and elsewhere. Hundreds of thousands of people poured into the streets of London and Paris, singing, dancing and lighting bonfires. But because the war with Japan in Asia and the Pacific was still going on, some leaders struck a cautionary note. One of them was President Harry Truman.

As he announced the Nazi surrender, Truman said: “Our victory is only half over,” reminding Americans that many of their neighbors were mourning the combat deaths of husbands, sons and brothers. Truman asked Americans “to refrain from celebrating in order to focus on the task ahead in the Pacific,” recalls historian Judith B. Gerber, in her essay in the Historical Dictionary of the 1940s.

Truman, who had taken office just weeks earlier upon the sudden death of his predecessor, Franklin D. Roosevelt, was cautious because fighting was still underway with Japan.

New York was the site of the largest V-E Day celebration, by far, within the United States. Crowds gathered in Times Square, and thousands marched down Fifth Avenue, with confetti raining down on them.

Even before the official declaration of victory, New York officials knew what was coming — and they were prepared. A few days before the anticipated announcement of V-E Day, the New York Times told its readers that 15,293 police officers would be on duty “to ensure that celebrants are held within the bonds of sane and reasonable hilarity.”

Manhattan wasn’t the only part of New York City to mark the occasion. In Brooklyn, Queens and the Bronx, services of prayer and thanksgiving were held at each borough hall. Protestant, Catholic and Jewish clergy, along with veterans’ organizations, participated. Special services were also held “by many business houses in addition to those in churches and synagogues,” the New York Times reported.

Other major victory celebrations occurred in San Francisco and Baltimore, and in Hawaii, with marching bands and parade floats, according to Gerber.

Meanwhile, a number of U.S. cities observed V-E Day in a subdued fashion, adhering to Truman’s advice. From coast to coast, Americans flocked to houses of worship to pray.

In Chicago, churches arranged special services, reported the Chicago Daily Tribune. Government and labor leaders asked workers to stay on their jobs, and liquor stores were closed for 24 hours.

New Orleans “had no frenzied celebration,” and a similar calm prevailed in Dallas, Boston and Denver, according to Newsweek. The mood in Atlanta was “somber, reflective,” while in Los Angeles, the mayor proclaimed: “This is not a holiday.”

In Virginia, at Third Service Command headquarters in Fort Myer, Major General Philip Hayes called for “a rededication to the work of winning the Pacific war.”

Richard L. Strout, a correspondent for the Christian Science Monitor, wrote that within the nation’s capital, “the joy is almost too deep and terrible to be put into words,” but “there is still Japan to contend with.” Moreover, “Mr. Truman has uttered an urgent appeal not to slacken efforts until ‘the battle is won.’”

V-E Day coincided with Truman’s 61st birthday. Although the new president urged Americans to temper their elation until all hostilities ended (which occurred three months later, in mid-August, when Japan surrendered), he did tell reporters that it was the best birthday he’d ever had.