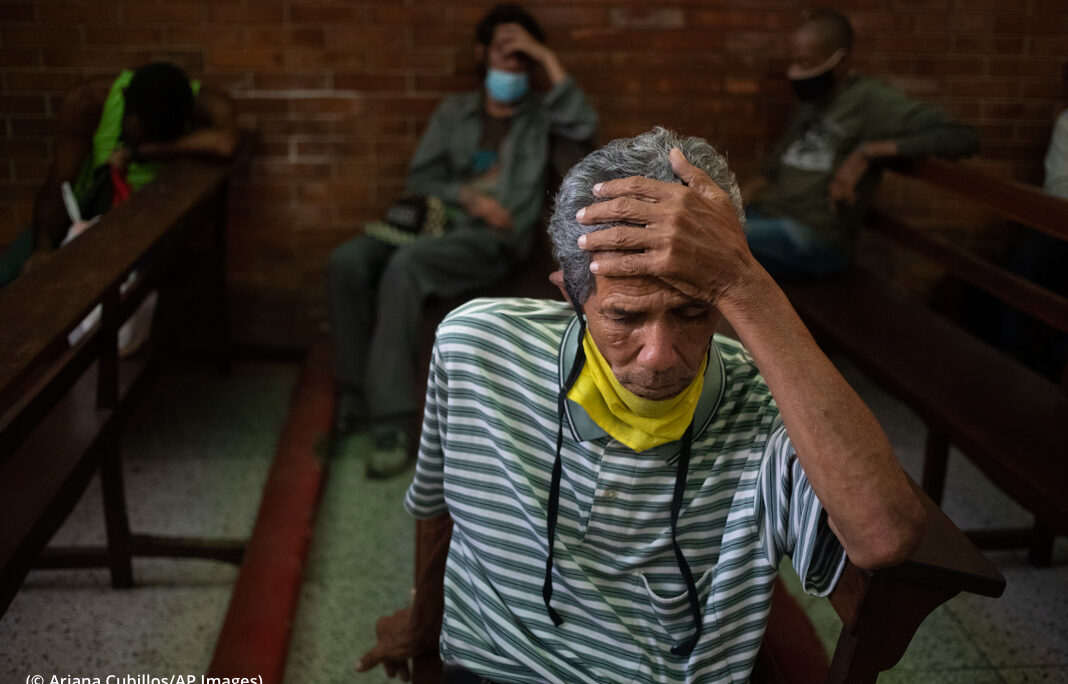 A man waits to receive a free meal at a church in Caracas, Venezuela, May 22, 2020. (© Ariana Cubillos/AP Images)
By Noelani Kirschner
The misrule, oppression and corruption of the illegitimate regime headed by Nicolás Maduro has caused widespread economic suffering and societal collapse in Venezuela.

The 2019–2020 National Survey of Living Conditions (ENCOVI, for Encuesta Nacional de Condiciones de Vida) — published by researchers at Andrés Bello Catholic University in Caracas — details how basic infrastructure, the labor market and education have deteriorated since 2014.

The United Nations estimated that in 2020, 7 million Venezuelans — 25 percent of the population — were in need of humanitarian assistance, while an astonishing 96 percent of Venezuelans lived in poverty, according to ENCOVI.

Daily water and electricity are increasingly unavailable, according to the report. Only 77 percent of the population has access to piped running water, and three-quarters of that group say they experience frequent service disruptions. News reports have featured scenes of people using open water in the street for bathing, cooking and drinking.

Thanks to regime-imposed government blackouts and the general degradation of electrical service across the country, 90 percent of Venezuelans do not have reliable access to electricity, the report says. Outside of Caracas in states like Zulia, Bolívar and Barinas, lights reportedly go out for days at a time.

A closer look at that data shows the employment situation is even worse. The number of workers in the formal job sector — jobs with regular hours, wages and benefits — has dropped from 64 percent in 2015 to 46 percent in 2020.

Many of those who remain in the formal job sector struggle with severe underemployment, where they cannot earn enough at their regular jobs to feed their families.

As a result, Venezuelans have had to find employment in the informal sector. These workers are not covered by health insurance and don’t have regular wages, leaving millions of Venezuelans struggling to provide for their families. This rise in the informal employment sector corresponds to the steep rise in poverty in the country.

Children are no less affected than their parents. School enrollment across the country has dropped from 12.7 million children to 11 million, according to the report. Only 60 percent of children regularly attended school in 2020.

When asked why they didn’t attend school consistently, children said it was because of the lack of food, water, electricity, and transportation.

“ENCOVI’s results are the sad reflection of the reality of Venezuela’s people,” said Juan Guaidó, Venezuela’s legitimate interim president. “They are not isolated numbers, nor cold numbers, but the reflection of what we Venezuelans are suffering at this moment.”

This article was originally published on September 24, 2020.