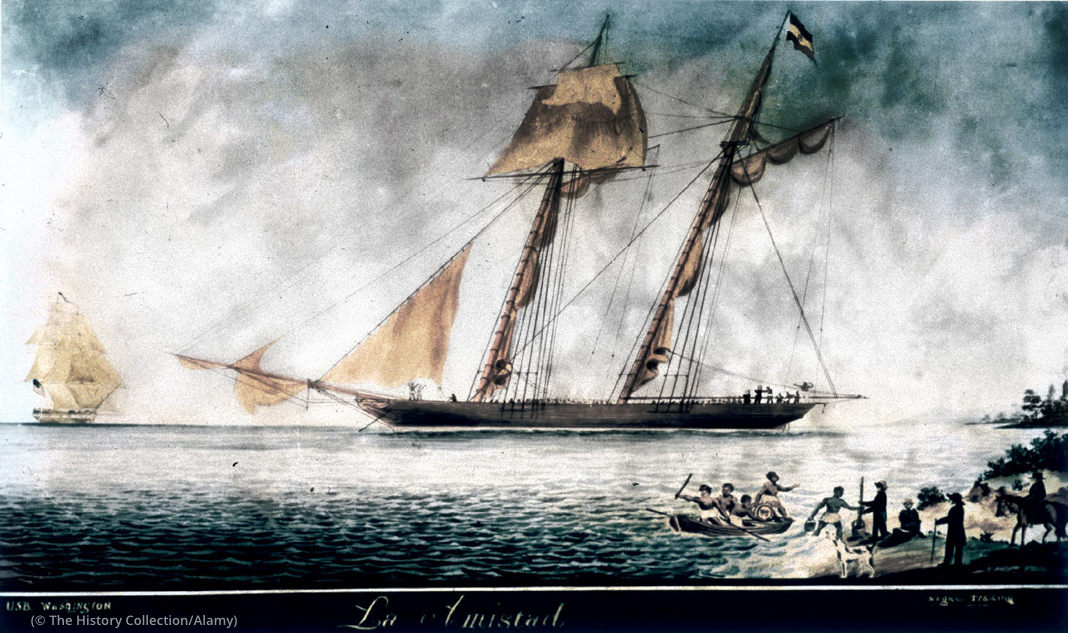 In 1839, the Amistad cargo schooner sailed from Havana to Puerto Principe, Cuba, with 53 Africans bound for a life of slavery on the island. But while aboard the schooner, the Africans fought for their freedom. Their battle gained them a reprieve. And soon, American abolitionists would take up their fight in U.S. courts.

The Africans — 49 men, three girls and a boy, all members of the Mende tribe — had been captured by Portuguese slave traders in present-day Sierra Leone and sold as slaves in Cuba, then a Spanish colony.

By this time, the U.S., as well as Spain and other European powers, had outlawed importing slaves. But the trans-Atlantic slave trade continued illegally. Havana, where the Mende were sold, had become a major port for such activity.

After leading a bloody uprising aboard the Amistad, Sengbe Pieh (who was given the name Joseph Cinque by Spanish slave traders) ordered plantation owners to sail the Amistad to Sierra Leone.

But unbeknownst to Pieh and the 41 other African survivors, the owners changed course and steered the ship to the United States.

The U.S. Navy seized the Amistad off Long Island, New York, and towed it to nearby Connecticut.

The ship’s arrival in Connecticut, in the Northeastern region of the United States, ignited a diplomatic, legal and moral battle. It would bring questions about slavery to the U.S. Supreme Court.

The Spanish government sent a direct request to President Martin Van Buren to return the surviving Mende to Cuba. The president forwarded it to the U.S. District Court in Hartford, Connecticut, where a case was pending over whether the Mende were in fact slaves.

Van Buren was facing reelection with little support due to an economic crisis. He thought a pro-slavery decision would help him among voters. He was so confident the court would agree to the Spanish claims that he readied a Navy ship to take the Africans, held in a Connecticut prison during the case, back to Cuba.

But abolitionists raised money to hire a translator to interview Pieh and the other survivors and to obtain legal help from abolitionist lawyer Lewis Tappan. Tappan drew public sympathy to the plight of the Africans.

To the surprise of many, District Court Judge Andrew Judson sided with the Africans (PDF, 824 KB), ruling in 1840 that they were not Spanish slaves, had been illegally trafficked and should be returned to Sierra Leone. Van Buren’s administration appealed but lost.

The U.S. government planned to argue, in a final appeal to the Supreme Court, that treaty obligations forced them to return the Africans to Cuba.

Tappan and abolitionist Ellis Gray Loring made important changes to their legal team. They retained someone who had argued before the Supreme Court before, who had negotiated treaties and, most important, who detested slavery.

A former president steps in

The abolitionists found all those qualities in former president John Quincy Adams, who at age 72 was still involved in politics as a Massachusetts congressman. Initially, he hesitated to argue the Africans’ case, but relented, believing it would become his final act of service to America.

“We think now, ‘What are presidents going to do after they’re no longer president?’” says John W. Franklin, senior manager emeritus for the Smithsonian’s National Museum of African American History and Culture. “This is an example,” he says in answer to the question. Adams was a “powerful member of society.”

Adams argued the Amistad case in 1841, saying the Mende were free and should be returned to their homeland.

He challenged the United States to live up to its ideals. “The moment you come to the [words in the] Declaration of Independence, that [say] every man has a right to life and liberty, an inalienable right, this case is decided,” Adams said. “I ask nothing more in behalf of these unfortunate men [than] this Declaration.”

The Supreme Court sided with Adams, and the abolitionists raised money to help send the long-suffering Africans home. (Some had died from disease while waiting for the court cases to end.) Thirty-five Africans, including Pieh, were able to return to Sierra Leone. (One of the girls came back to the U.S. later to attend Oberlin College in Ohio.)

For his part, Van Buren lost his reelection bid (even before the Supreme Court case started).

In 1992, the city of New Haven, Connecticut, honored the African survivors of the Amistad kidnapping with a 4-meter-high bronze monument of Pieh. His form stands proudly over what had been the site of the New Haven jail, where he and his fellow Africans endured the legal battles that would ultimately free them and bolster the abolitionist movement in the United States.