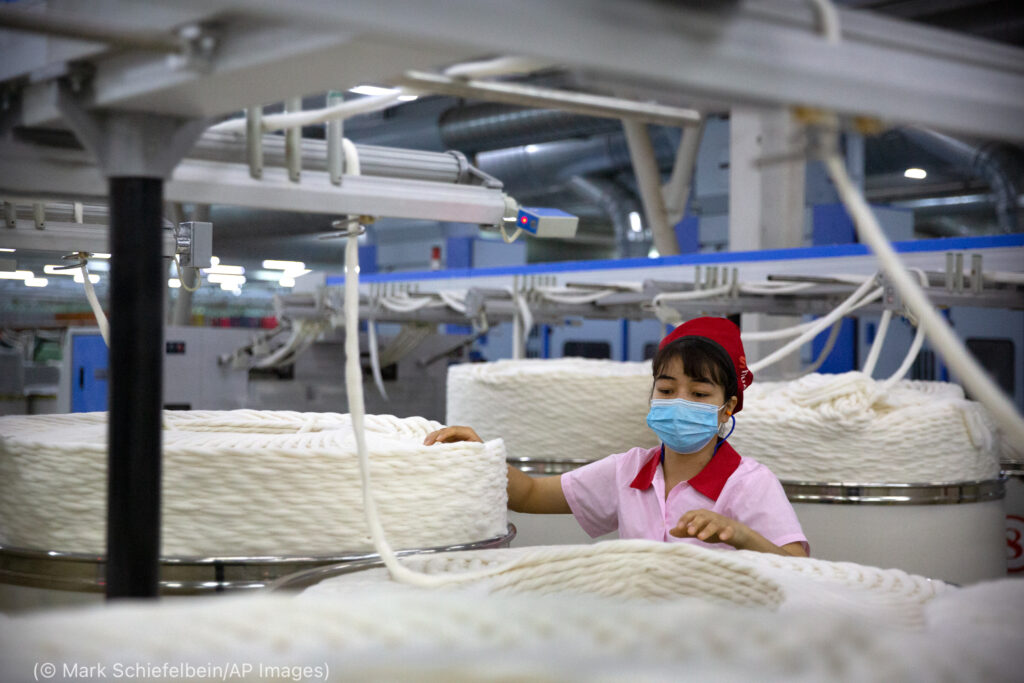 A worker processes cotton yarn April 20 at a plant in China’s Xinjiang region. The U.S. government has blocked cotton from the region due to evidence of forced labor. (© Mark Schiefelbein/AP Images)

The United States works to stop forced labor around the world. That’s why it won’t import seafood from a fishing fleet based out of the People’s Republic of China.

“Companies that exploit their workers have no place doing business in the United States,” Department of Homeland Security Secretary Alejandro N. Mayorkas said. This order “will ensure we continue to protect the human rights of those working in the distant water fishing industry.”

Most of the fleet’s workers are from Southeast Asian nations, such as Indonesia, Vietnam and the Philippines.

.@CBP announced restrictions on seafood products from the PRC-based Dalian Ocean Fishing Company due to evidence of its involvement in forced labor. The international community must combat forced labor wherever it occurs, including in the fishing industry. https://t.co/Fnj8qlgvKm https://t.co/qNrI6zo2UD

U.S. law precludes the importation of products made, wholly or in part, by convict, forced or indentured labor. The U.S. government advises companies to review their supply chains to prevent and address forced labor. The government has also taken numerous actions to stop the problem at its source.

In January, the CBP blocked all cotton and tomato products from China’s Xinjiang region from entering the United States due to evidence of forced labor. And in July 2020, CBP officers detained 13 tons of human hair products originating from Xinjiang for the same reason.

Since 2017, China’s government has interned more than 1 million Uyghurs and members of other predominantly Muslim minority groups in Xinjiang and subjected many of them to forced labor, according to the U.S. departments of State and Labor.

The U.S. Department of Labor’s 2020 List of Goods Produced by Child Labor or Forced Labor, issued in September, found that 17 products are made with forced labor in the PRC, more than any other country in the world.

The United States also works with the international community to uphold worker rights. The United States-Mexico-Canada Agreement includes provisions that prohibit the importation of goods produced by forced labor to North America.

“The United States will promote accountability for those who use forced labor to exploit individuals for profit,” State Department Spokesperson Ned Price said May 28. “We will work with our international partners to ensure that the voiceless are heard and protected.”

For more information on commodities and industries at risk of forced labor, visit www.ResponsibleSourcingTool.org.