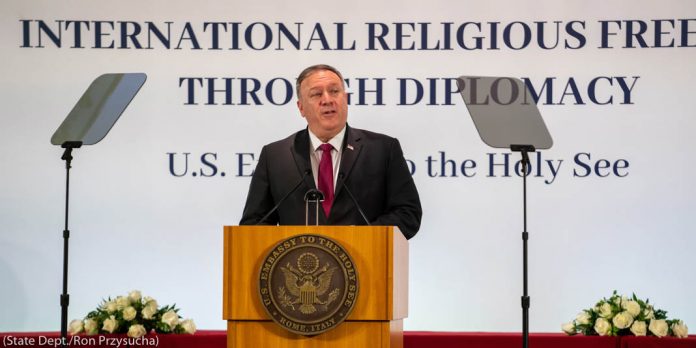 Father Bernhard Lichtenberg endured imprisonment in Berlin during World War II rather than stop publicly supporting Jews and other victims of Nazi brutality.

Condemned to a concentration camp, Lichtenberg died during his transfer from prison to Dachau rather than give up his fight for religious freedom.

In September 30 remarks at a symposium organized by the U.S. Embassy to the Holy See, U.S. Secretary of State Michael R. Pompeo encouraged religious leaders to honor Father Lichtenberg’s struggle by continuing to combat religious persecution wherever it occurs.

“Today, as we think about that man, I urge all faith leaders to exhibit a similarly moral, bold witness for the sake of religious freedom, for human dignity, and for peace,” Pompeo said.

Great meeting with Cardinal Parolin and Archbishop Gallagher. We are grateful for the Holy See’s humanitarian efforts around the world, and we are proud to partner together to advance religious freedom and other human rights. pic.twitter.com/OZfhV9U5Gg

During the event, “Advancing and Defending International Religious Freedom through Diplomacy,” Pompeo said the U.S. and the Holy See share a similar interest in defending human rights and religious freedom, and in supporting peace between nations.

Catholic bishops in West Germany and Poland in the 1960s led post-war reconciliation between those two countries. And Christian leaders in the 19th century played a leading role in the fight to abolish slavery in the United States.

“We must support those demanding freedoms in our time, like Father Lichtenberg did,” Pompeo said.

Pompeo met in Vatican City with Holy See Secretary of State Cardinal Pietro Parolin and Secretary for Relations with States Archbishop Paul Gallagher to discuss the importance of defending religious freedom and other human rights worldwide. Pompeo expressed particular concern about the persecution of religious minorities in China.

During the trip to Rome September 30 to October 2, Pompeo also met with the leaders of Italy, a key NATO ally. Talks with Italian Prime Minister Giuseppe Conte and Foreign Minister Luigi Di Maio focused on the nations’ security partnership and ongoing efforts to combat the COVID-19 pandemic.

To date, the U.S. government has contributed more than $60 million to fight the coronavirus in Italy, while the U.S. private sector has contributed approximately $65 million, a tangible sign of the countries’ ties.

“The Italian people should know that we will always be with you as these challenges arise,” Pompeo said during a September 30 press event.