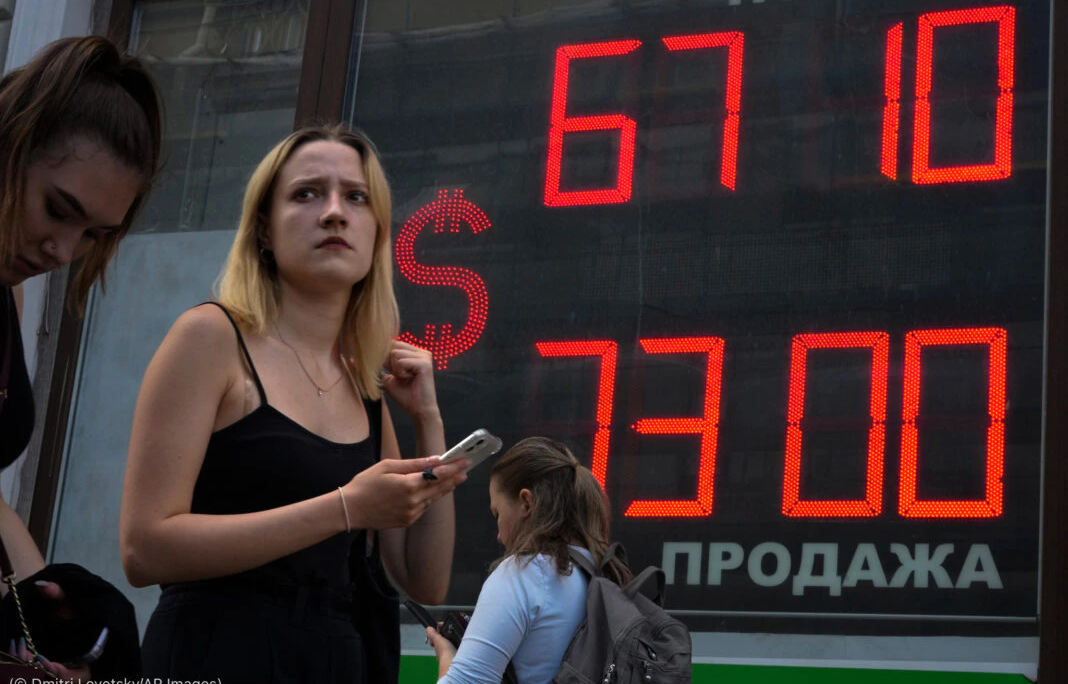 More than 30 countries have imposed sanctions against Russia, cutting energy imports, blocking financial transactions and halting shipments of key imports, such as semiconductors and other electronics. As a result, over 1,000 foreign companies have halted operations in Russia.

Meanwhile, imports to Russia have declined more than 50% this year. Consumer spending has plummeted, and Putin is running a budget deficit. Without question, Russia’s economy faces massive repercussions from Putin’s brazen war with Ukraine. But the Kremlin’s propaganda machine is working overtime to paint a fictitious picture of economic stability.

“Moscow has been cherry-picking economic data to support President Putin’s insistence that everything is fine and the Russian economy is going strong,” Secretary of State Antony Blinken told reporters July 27 in Washington. “It’s simply not true.”

A recent economic analysis from Yale University’s School of Management and Chief Executive Leadership Institute details the real economic toll of international sanctions and business withdrawals. Here are a few key facts that debunk the Kremlin’s latest myths about the country’s economic stability and performance.

Exporting large amounts of natural gas to non-European countries is not an option for Russia in the near term. Over 90% of Russia’s gas is transported by pipeline, and most of Russia’s pipelines connect to markets and refineries in Europe.

MYTH: The Russian economy and domestic consumption are strong.

Russia has seen the retreat of global businesses and luxury brands, and the loss of many of its best and brightest workers as a result of sanctions. Foreign car sales in Russia have fallen roughly 95%, the Yale study authors say in Foreign Policy. Their analysis found that fleeing foreign investment prompted a mass exodus of 500,000 people, most of them highly skilled, educated workers.

The sanctions, together with business and talent withdrawals, have created a domino effect on the economy, which will only grow and compound over time. Meanwhile, consumer spending and retail sales have dropped roughly 20% in the past year.

FACT: Russia’s imports have dropped 50%, including imports from China.

While Russia’s imports overall have dropped more than 50% this year, the value of imports from the People’s Republic of China (PRC) also declined dramatically, falling from more than $8.1 billion per month to $3.8 billion from January to April 2022, the study’s authors say.

The lack of imported supplies means Russian manufacturers must recycle technological components they cannot produce domestically. Russia has used microchips taken from refrigerators and dishwashers in military equipment. At home, purchasing managers are reducing new orders and consumers lack access to products that were once part of their lives.

.@SecBlinken: Though the Kremlin is working hard to paint a picture of economic stability, the facts show otherwise. The powerful impact of sanctions will grow and compound over time. pic.twitter.com/dbBji0J15P

MYTH: The Kremlin has a lot of money available and can rely on cash reserves.

Russia’s past energy exports allowed the Kremlin to amass significant sovereign wealth. Now half of those funds are frozen overseas, thanks to restrictions the United States, Japan and European partners imposed in response to Putin’s continued aggression.

The value of Putin’s remaining foreign exchange reserves has plummeted by $75 billion since the February 24 invasion. And while Putin claims the ruble remains strong, the Yale analysis shows the Kremlin is artificially inflating Russia’s currency with restrictions that “make it effectively impossible for any Russian to legally purchase dollars or even access a majority of their dollar deposits.”

“Headlines arguing that Russia’s economy has bounced back are simply not factual,” the authors conclude. “The facts are that, by any metric and on any level, the Russian economy is reeling.”

Though Putin insists that everything is fine, the facts show otherwise. The economic toll of sanctions is real and significant.