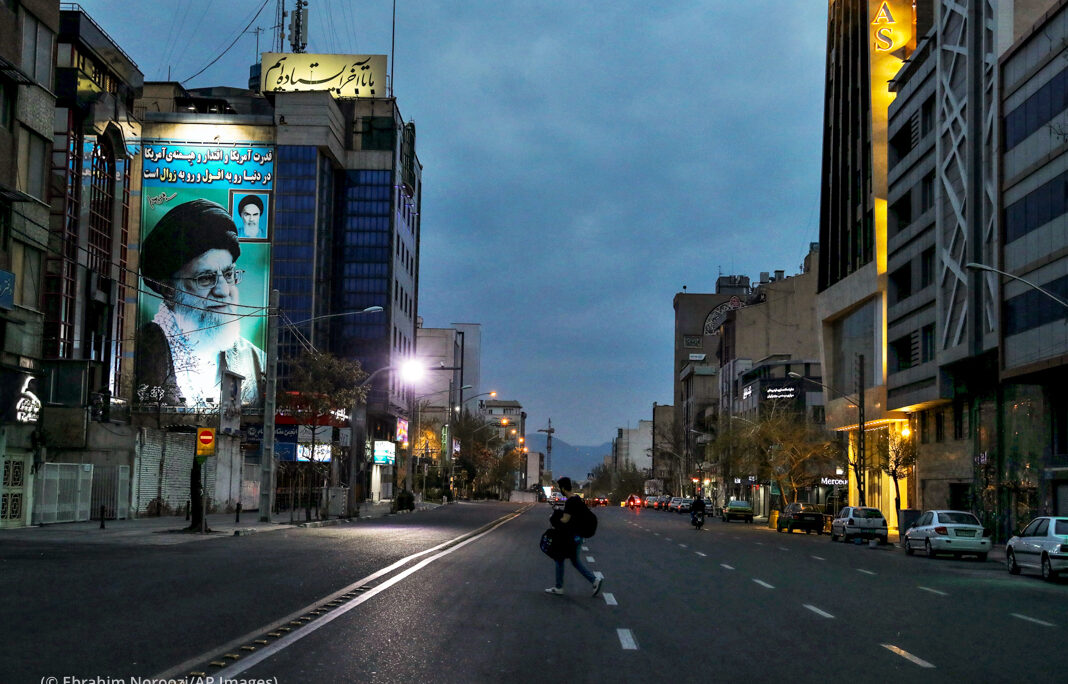 In this Tuesday, March 24, 2020 photo, a pedestrian crosses an empty street with a portrait of Iran's Supreme Leader Ayatollah Ali Khamenei, in Tehran, Iran. Due to the coronavirus and the COVID-19 illness it causes, life has changed dramatically on Tehran's main highways, in the narrow corridors of

Iran struggles with economy broken by regime failures (May 20)

The Iranian regime is struggling to avoid economic disaster after the regime’s years of economic mismanagement and terrorist financing.

More than 7 million Iranians have lost their jobs or been furloughed during the COVID-19 crisis, regime spokesman Ali Rabiei recently acknowledged, according to Voice of America (VOA). Rabiei added that upward of 35 percent of Iranians are struggling to make ends meet.

“The Rouhani government’s revenues have shrunk dramatically,” Sadeghi writes. As a result, Iran’s regime would have struggled to keep the economy afloat under a continued economic shutdown as other countries have done, he adds.

Iran’s economy was in dire straits even before COVID-19 struck. The International Monetary Fund predicted in October 2019 that Iran’s economy would contract by 9.5 percent in 2020.

“Even before the virus struck, the Iranian economy already had collapsed, and now that people have been told to stay home, it has gotten worse,” Zartosht Ahmadi Ragheb, an Iranian opposition leader, told VOA April 14.

The turmoil comes after Iran’s regime has for years put terrorist financing above the needs of everyday Iranians. In 2019, Rouhani pulled $4.8 billion from the National Development Fund for state propaganda and terrorism, according to the U.S. Department of the Treasury.

Supreme Leader of Iran Ayatollah Ali Khamenei initially dismissed fears of the coronavirus as “negative propaganda” circulated by the regime’s enemies to drive down voter turnout in February 21 parliamentary elections. The regime also has downplayed the consequences of the outbreak.

In mid-April, the research arm of Iran’s parliament reported that Iran had suffered upward of 8,700 deaths, nearly twice the 4,777 deaths the regime had reported at the time, according to Radio Farda. The panel also reported 600,000 infections, approaching eight times the regime’s figure of 76,389 cases.

Despite the added hardship COVID-19 has brought to the Iranian people, Iran’s regime continues to spend its people’s resources on terrorism. The United States has imposed sanctions that seek to compel the regime to stop fueling violence and spend its money at home.