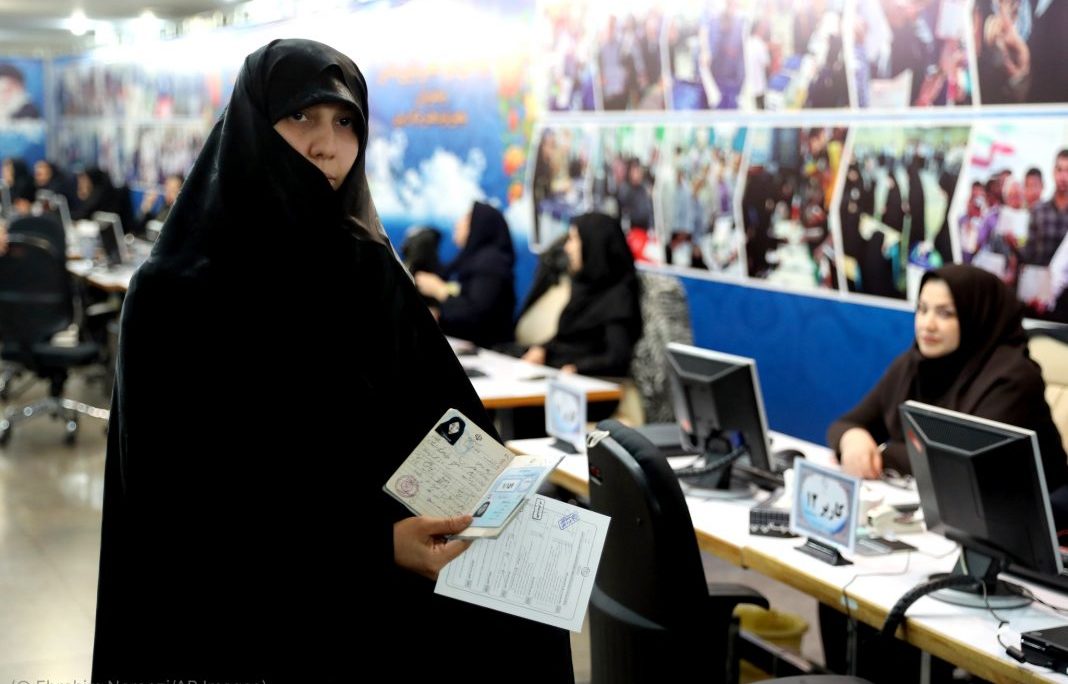 A woman arrives at the Interior Ministry in Tehran on December 1, 2019, to register to run for parliamentary elections set for February 2020. (© Ebrahim Noroozi/AP Images)

Iranian President Hassan Rouhani acknowledges that Iran’s regime is in dire straits. But rather than taking responsibility, he is asking the Iranian people to vote for more of the same.

At a recent rally in Tehran, Rouhani implored the Iranian people to set aside any “possible complaints and criticism” and vote in parliamentary elections scheduled for February 21.

“We should not withdraw from the ballot boxes,” the Associated Press reports Rouhani said at a recent rally. “The ballot boxes are our savior.”

Rouhani’s spokesman, Ali Rabiei, went further, saying Iranians should vote to save a dying regime. “The only way to resist the collapse of Iran is going to the polls,” he told reporters February 3, according to Radio Farda. “The upcoming election is the most important election in the history of the Islamic Republic.”

But the regime has turned the election into a charade. The regime’s Guardian Council recently disqualified more than half of the 14,000 candidates who were vying for seats in the parliament. Appointed by Supreme Leader of Iran Ali Khamenei, the Guardian Council approves all eligible candidates, ensuring the exclusion of most regime critics.

Even Rouhani has blasted the disqualification of candidates, saying that “all parties and groups” should be allowed to participate.

But the politicians’ current call for voter turnout is hardly the first time Iran’s regime has sought to hide its squelching of the voices of everyday Iranians. In November 2019, when demonstrations sparked by a hike in gas prices turned against the government, the regime responded by shutting down internet access and killing about 1,500 demonstrators.

Last year’s demonstrations targeted the regime’s corruption and mismanagement that have tanked Iran’s economy. The protests resumed in January after the regime reversed previous denials and acknowledged shooting down a passenger airplane, killing everyone on board.

One of the lawmakers excluded from the parliamentary elections, Mahmoud Sadeghi, has alleged that middlemen sought bribes of upward of $300,000 to win the Guardian Council’s approval to run. Sadeghi, an outspoken human rights supporter, has called for an investigation into whether the Council is complicit in the alleged bribery scheme.