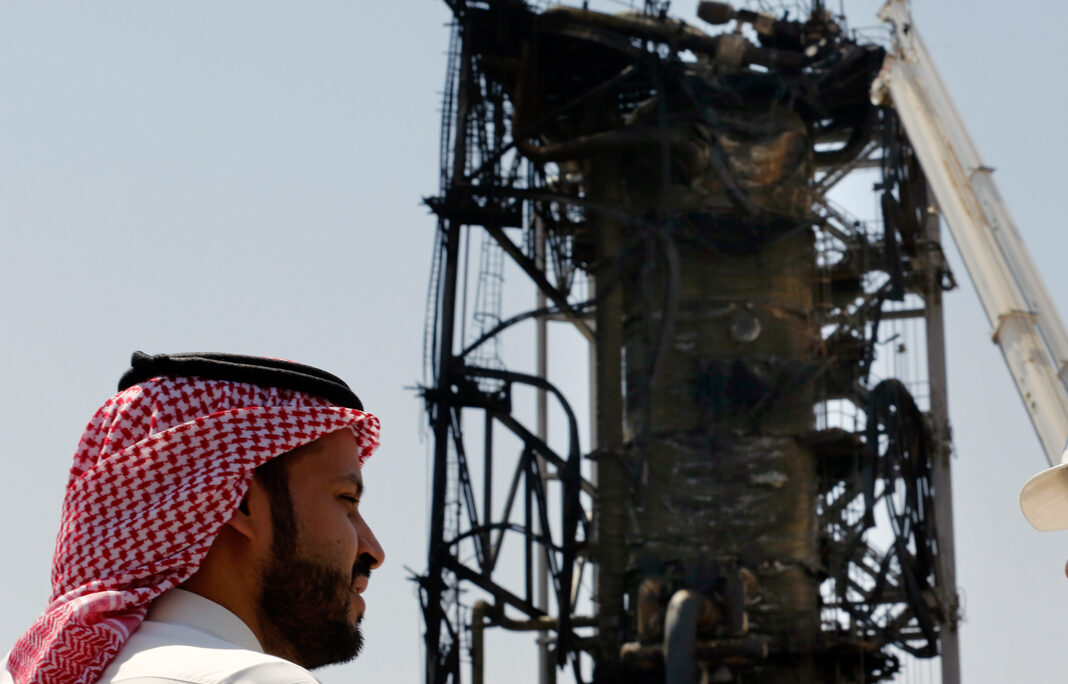 In this photo opportunity during a trip organized by Saudi information ministry, a man watches the damaged in the Aramco's Khurais oil field, Saudi Arabia, Friday, Sept. 20, 2019, after it was hit during Sept. 14 attack. Saudi officials brought journalists Friday to see the damage done in an attack

Several Middle East nations are pressing the U.N. Security Council to renew the arms embargo against Iran’s regime, saying that letting the restriction lapse would cause “anarchy.”

Saudi Arabia, Bahrain and Israel have all called for renewing the embargo that is scheduled to expire in October. The countries blame Iran’s leaders for arming terrorist and proxy fighters and say allowing the regime to buy advanced weapon systems will endanger the region.

The “Iranian pattern of behavior aims to create anarchy in the region by supporting and promoting outlaw groups, whether it is in Yemen or Lebanon or Syria or Iraq,” Saudi Arabia’s representative to the U.N., Abdallah Al-Mouallimi, said July 1, according to press reports. “We can only imagine how this behavior would develop … should the ban on arms and weapons be lifted in October.”

Bahrain, in a June 29 joint statement with the United States, said the Iranian regime’s arming of terrorists and proxy fighters undermines Bahrain’s security.

“In recognizing the grave threat posed by Iranian arms transfers in the region broadly and in Bahrain specifically, the United States and Bahrain call upon the United Nations Security Council to extend the arms embargo on Iran before it expires,” the joint statement said.

Calls from Iran’s neighbors to extend the embargo reinforce U.S. warnings that allowing the world’s leading state sponsor of terrorism to freely buy and sell advanced conventional weapons would threaten peace and security. Those weapons could include combat aircraft, warships, submarines and guided missiles.

The U.N. recently found that the Iranian regime arms proxy groups in violation of the embargo and that weapons seized off the coast of Yemen in November 2019 and in February were of Iranian origin. The U.N. also confirmed that weapons used to attack Saudi Arabian oil fields last year originated in Iran.

If the embargo expires, Iran could freely sell weapons to fuel conflicts throughout the region, including to the Houthis in Yemen and to Hizballah in Lebanon, U.S. officials say.

U.S. Secretary of State Michael R. Pompeo has said that the U.S. will circulate a U.N. resolution to extend the embargo, but has the legal authority to unilaterally extend the restriction as well. “One way or another, we will do the right thing,” Pompeo said August 5. “We will ensure that the embargo is extended.”

The int’l community must extend the arms embargo on Iran. Otherwise, in October 2020, the regime will:
🔺scale up its military arsenal
🔺acquire advanced weapons
🔺which it will transfer to its terrorist proxies
🔺threatening the region and beyondhttps://t.co/bbd7Mjgm78 pic.twitter.com/QHOexdfyMx

Israel’s representative to the U.N., Danny Danon, also called for renewing the embargo.

“We believe the Iranians are not only posing a threat to Israel but to the entire community of the world,” he told the Washington Post July 14. “We encourage all countries to support the position of the U.S. and not allow Iran to continue and increase the involvement in supplying arms to different groups in the Middle East.”