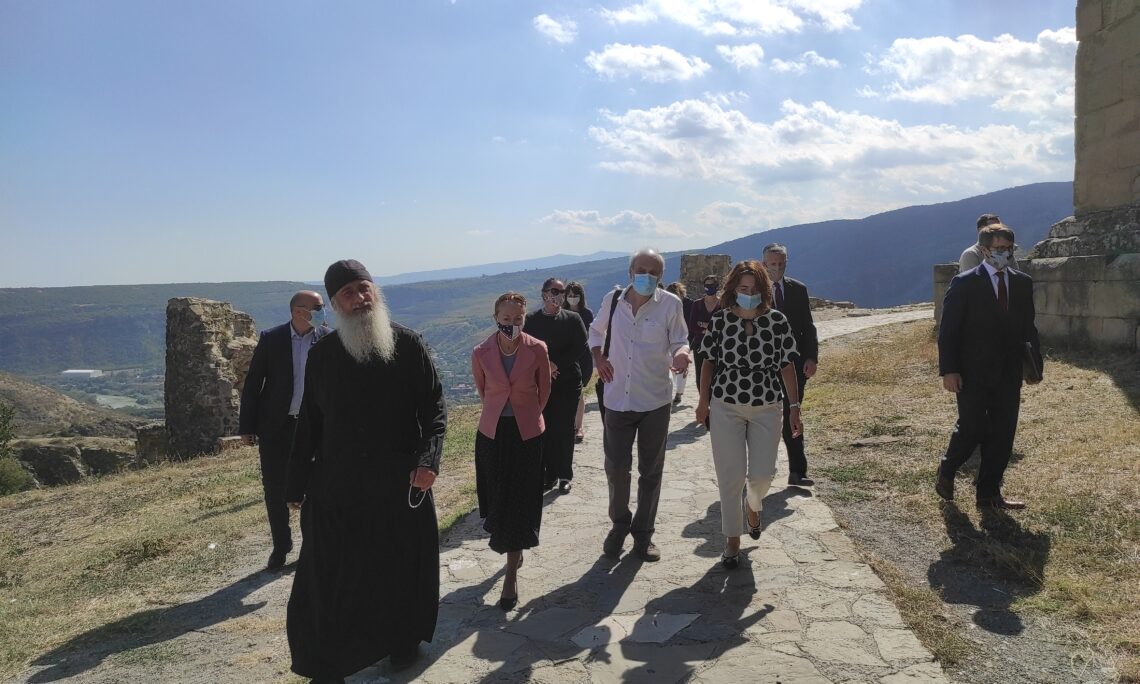 The U.S. Embassy in Tbilisi is proud to announce that the Jvari Monastery preservation project was selected by Ambassador’s Fund for Cultural Preservation (AFCP).

The ongoing preservation works also funded by the U.S. Government will now extend to cover the entire outer sandstone masonry of the building, including all four facades and all eight sides of the drum, about 1200 square meters of the wall surface. The first phase of this project was funded with $100,000 also under the AFCP program. The large grant will provide an additional $506,250 for the vital preservation works, which will be done by the George Chubinashvili National Research Center.

Ambassador Kelly C. Degnan along with Deputy Minister of Education, Science, Culture and Sport Levan Kharatishvili, His Eminence Metropolitan David, Director of National Agency for Cultural Preservation Nikoloz Antidze, Director of Chubinashvili Research Center Tamar Belashvili, and distinguished guests attended the announcement ceremony and presentation of this important project which will help preserve this incredible monument for many generations to come.

Ambassador Kelly Degnan: The United States Embassy is very proud to be able to announce today that we will provide over half a million dollars in funding to help preserve the major church at Jvari Monastery.  This is through the Ambassador’s Fund for Cultural Preservation, an initiative that has provided almost 2 million dollars in funding for twenty projects throughout Georgia over the course of last two decades.  Churches in Georgia play such an important role in history and culture and the society.  The United States is very proud to be able to help Georgia preserve these iconic symbols of Georgia’s history.  Thank you!

Q-n about the pre-election environment in Georgia considering the facts of voter intimidation and abuse of administrative resources, and also, what would be your recommendation for conducting the elections with the COVID situation in the country since the U.S. is dealing with the same problem as well? Also, can you comment on critical media outlets express concern that the ruling party member’s refuse to participate in their talk shows or debates?

Ambassador Kelly Degnan: We are following very closely the pre-election reports that are coming from respected organizations like ISFED and others who are keeping a close watch and are in touch with communities regarding the pre-election environment.  Of course, its very concerning when we hear that there have been incidents of voter intimidation, where people are being pressured to get out for vote, or to vote in certain way.  Georgia worked so hard to pass the electoral reform legislation this summer, and as we’ve said all along, the key is rigorous implementation and enforcement of this.  So, we will continue to watch very closely and to work closely with the election monitoring organizations to raise awareness when we are informed about violations of the law or tactics that are designed to intimidate voters or vote buying or otherwise interfere with free and fair election.  On COVID-19, I know that the Central Election Commission is already preparing steps, measures that can be taken into polling stations, these are going to be very important to protect not just voters’ safety in voting but also election workers, so those who are coming to help at the polling stations so that they too can assist with these elections in a safe and healthy manner, and I have confidence that these measures will be taken and we hope will be sufficient.  On the last question, it’s very important that voters hear from all of the parties what their platforms are.  In the United States, political debates are an important way that voters learn about what distinguishes one party from another.  I would encourage all the candidates, all the parties to be open to participating in that kind of political dialogue, in presenting their programs so that voters can go to the ballot well informed about the choices they want to make.  Thank you!

Q-n about the amendments to the law on General Courts pertaining the selection of Supreme Court judges, what are the expectations?

Ambassador Kelly Degnan: This is a very important piece of legislation, a lot of work has gone into it.  The parliament has held inclusive working group meetings to try and address concerns raised by the Venice Commission, by the European Union, by the United States, others who are helping Georgia build more independent and stronger judiciary.  Many of those recommendations have been incorporated into this draft legislation.  My understanding is the remaining few will be, we hope, addressed and included in a meaningful way in current draft. The importance of this legislation is in providing greater transparency and accountability so that the Georgian public knows the qualifications of the justices being appointed and reasoning behind their selection or their rejection from serving on judicial panels.  The purpose of this legislation is to continue the effort to have a more transparent and a more qualifications-based judiciary.

Ambassador Kelly Degnan: Any time there are attempts to change the situation on the ground, these borderization attempts are of great concern, I know, to all of us who are following this and hoping for resolution to this conflict.  I can only say that we follow it very closely, and I can only reiterate the United States’ strong and steadfast support for Georgia’s territorial integrity and sovereignty.  Russia needs to fulfill its obligations under the 2008 agreement and withdraw its forces and reverse its recognition of Tskhinvali and Abkhazia.  This is what Russia should have done 12 years ago, that’s what it said it would do and it should do it now.

Q-n: There is an information that you met with Bidzina Ivanishvili. Where and when did you meet him, and also, what did you discuss?

Q-n about the recently published Edison Research poll results and the importance of pre-election polling in general, also how does the abuse of administrative resources affect the U.S.-Georgia relations

Ambassador Kelly Degnan: Polls are obviously very important.  I think its extremely valuable to have the findings of respected organizations like Edison.  I believe IRI is also going to be releasing the poll results, this is all important information not just for the public, but for political parties to understand again the priorities of the voters, what Georgians are most concerned about, and to shape their platforms to be responsive to the Georgian voting public’s needs.  So, in that respect, I think poll results from reputable organizations that have standard internationally accepted methodologies for conducting their polling are extremely important anytime, but particularly during an election season.