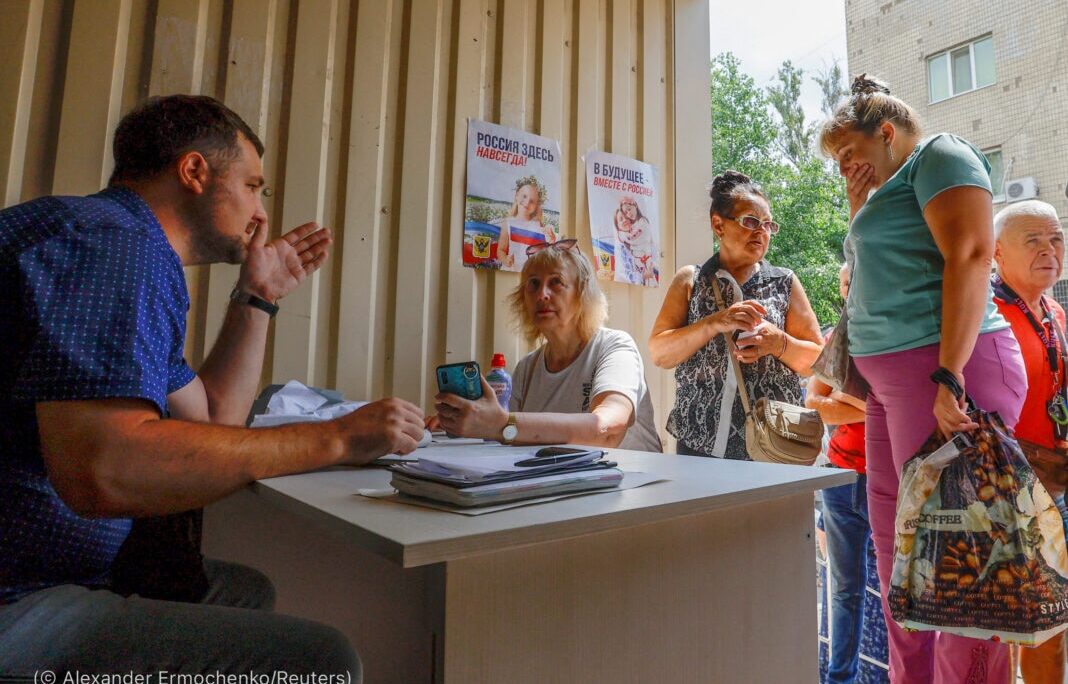 Residents of Kherson stand in line July 25 to obtain Russian passports that are now required to work in this Russian-controlled city. One of the posters reads: "Russia is here forever." (© Alexander Ermochenko/Reuters)

The Kremlin is orchestrating sham referendums in parts of Ukraine currently under its military control in a bid to legitimize Russia’s hold on these territories. Moscow is rolling out the same playbook it used in 2014 when Russia invaded Crimea and forcibly seized parts of eastern Ukraine. As it did in 2014 in Crimea, Russia has installed pro-Putin officials in key municipal and regional roles in the eastern provinces of Kherson (often spelled Khersonska) and Zaporizhzhya (often spelled Zaporizka), where Russian forces have taken control.

Proxy officials are arranging fraudulent referendums in Russian-controlled areas asking voters to become part of Russia. The Kremlin will then use the results to claim that voters in the occupied territory want to join Russia.The referendums could occur as early as this month. “Let’s start by saying any referendum would be illegitimate by Ukrainian law, by Russian law, by any law,” Olena Zhuk, chair of the regional parliament in Zaporizhzhya, told The Guardian. Similar Russian-staged votes were held after the Kremlin invaded and occupied Crimea in 2014 and took control of parts of the Donetsk and Luhansk provinces, known collectively as the Donbas region.

Leading up to the votes, the Kremlin has stepped up claims those territories are already “part of Russia” and efforts to erase Ukrainian culture.

Throughout the city of Kherson, billboards read, “A City with a Russian history.” A poster of a young girl quotes Russian President Vladimir Putin saying, “Russians and Ukrainians are one people, the unified whole.”

In areas of both provinces:

Yevgeny Balitsky, a Kremlin-installed Russian official Zaporizhzhya, called the pending referendum a “reunification” with Russia. He made the announcement during an event in Melitopol titled “We are with Russia.”

Kherson residents who spoke to The Guardian newspaper indicated they are not interested. “It will be a referendum at gunpoint,” a Kherson resident who worked in the IT sector before the occupation, told the paper. Other Ukrainians apparently feel the same way. An August poll by the International Republican Institute, a U.S. nonprofit, showed Ukrainians are confident they will win the war and not concede any territory. Kremlin officials make no attempt to hide their intentions to end Ukraine’s sovereignty over these regions. “The Kherson region’s admission into Russia will be complete, similar to Crimea [in 2014],” Igor Kastyukevich, a member of the Duma, Russia’s legislature, said June 7.

“Moscow is laying the groundwork to annex more Ukrainian territory,” U.S. Secretary of State Antony Blinken said July 27, noting that the U.S. government will not recognize any purported annexation. “The people of Ukraine democratically elect their own leaders. The government of Russia has no say in that whatsoever.”