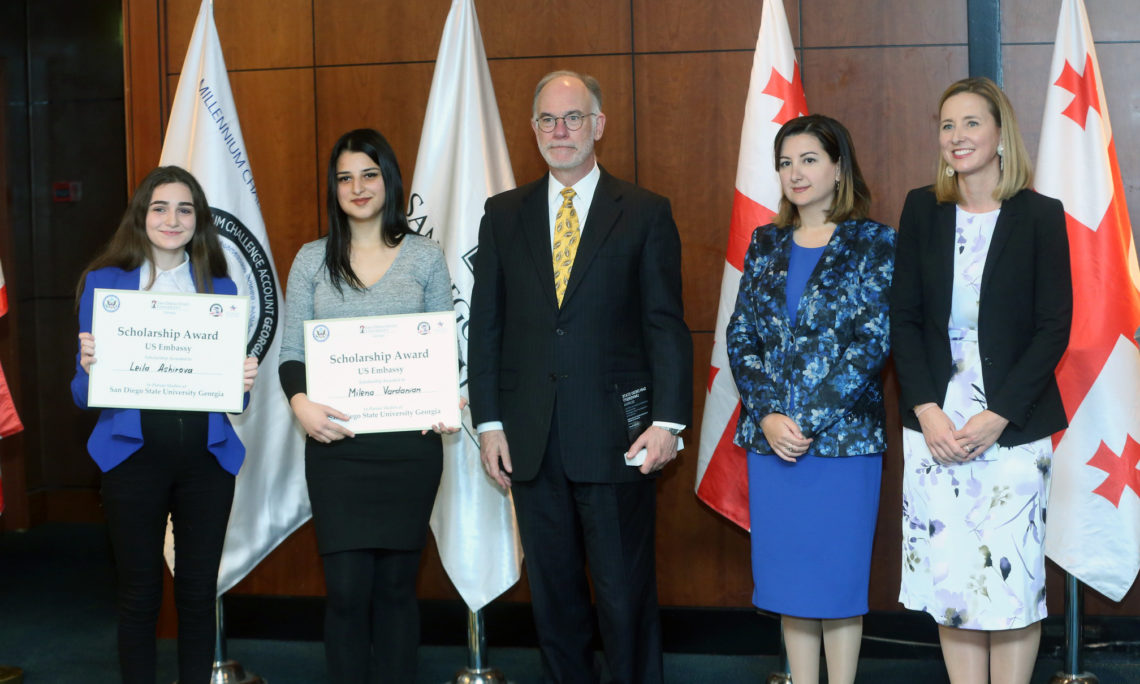 On December 7, Chargé Wilson spoke at a ceremony launching the San Diego State University-Georgia Career Development Center.  He also announced the awarding of several new academic scholarships supported by the U.S. Embassy.  In his comments, the Chargé acknowledged the importance of the institution in educating and developing young Georgians in the fields of science, mathematics, engineering, and technology.

Ambassador Ross Wilson:  San Diego State University in Georgia is one of the most successful and interesting initiatives that the United States supports here to educate and develop young Georgians in the fields of science, mathematics, engineering, and technology.  We are here to inaugurate a new career development center at the university, and also to announce some additional scholarships, and maybe most importantly, to recognize the generous support of this university and of the students at it by the Georgian private sector, as well as of course, by the government.  This is a room of very bright, young, interesting people, and I am thrilled to be with them today.

Q-n about the Department of State statement regarding the Presidential Election results marred with irregularities, also mentioned in the NGO sector reports

Ambassador Ross Wilson:  I think the State Department statement on the elections, and our own Embassy statement in the aftermath of the elections, essentially say the same thing.  We note a number of shortcomings and issues that were raised by OSCE/ODIHR, and by international and domestic observers.  Their reports also contain a number of recommendations for Georgia to work on to approve the conduct of relations here.  We think those are very important… and we will be devoting a lot of time and attention, along with our European friends, along with the OSCE, and with others, to try to work with the government on those matters.

Ambassador Ross Wilson:  I do not have a specific comment on the matter, on the actions of the European Ministers have taken.   Clearly, issues of rule of law are very important to the United States in this country; issues relating to the potential use of a law enforcement system for political ends are deeply concerning to us.  That is not a statement of anybody’s guilt or innocence; it is a reality, and we certainly hope that proper legal procedures will continue to be followed in this and other relevant cases.