Everyday heroes exist around us, but only when disaster strikes do we know who they are.

During a ceremony November 18, the State Department honored Badye and Hella Ladhari as Heroes of U.S. Diplomacy for their service to the United States and for saving lives in the face of immediate danger during and after the attack on the U.S. Embassy in Tunis, Tunisia, on September 14, 2012.

The Ladharis are the first locally employed staff members to be honored as Heroes of U.S. Diplomacy, a community that includes over 60,000 men and women who work in U.S. embassies and consulates around the world.

“The Ladharis played critical roles, both during and in the immediate aftermath of the attack on the U.S. Embassy in Tunis, in September 2012,” said Director General of the Foreign Service Carol Z. Perez on November 18. “And their heroic and selfless actions saved lives, preserved the American flag and got hundreds of U.S. Embassy employees, family members, and children out of harm’s way.”

The Ladharis, who are husband and wife, gave a combined 58 years of service at the U.S. Embassy in Tunis. Badye worked as the lead foreign service national investigator in the embassy’s Regional Security Office, while Hella was a senior human resources specialist at the embassy. 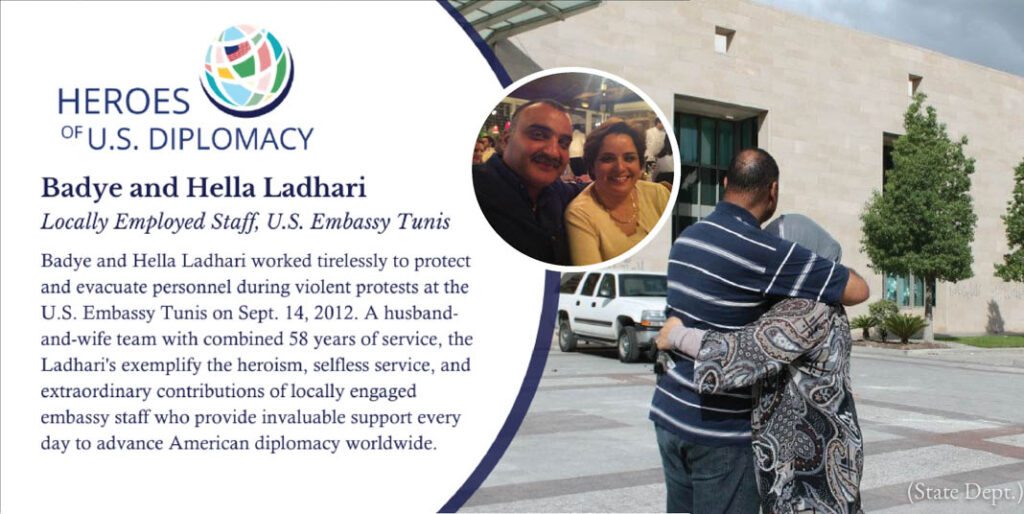 On September 14, 2012, the U.S. Embassy in Tunis received word via social media that an attack was possible. In the interest of safety, the embassy called for most of the staff to return home in case of unrest.

Hella begged Badye to come home with her, but he refused. He wanted to stay behind and help to protect the complex however he could.

When violent protests broke out several hours later, Badye braved the mob outside when he heard an American member of the staff was trapped in a building outside the embassy compound.

Risking his own life, Badye brought the staff member back to safety in the main part of the embassy.

Shortly after, as the crowds grew in size and anger, Badye saw protesters trying to take down the U.S. flag. Badye dispersed the crowd before they did damage to the flag, a symbol of U.S. diplomacy in Tunisia.

“Without any hesitation, I ran towards them,” he said, and “spread out the crowd.”

In the immediate aftermath of the attack, Hella was instrumental in coordinating the exit visas for more than 100 embassy personnel and family members. She was one of a few locally employed staff members to be allowed into the embassy to complete the necessary documentation.

When no commercial flights were available out of Tunisia because of the unrest, Hella helped to arrange a military evacuation flight to get American embassy staff and their families to safety.

While she remained calm and thought quickly during the crisis, Hella says she was at the same time processing the trauma of the event and worrying about Badye.

“For me, it was really a big shock,” said Hella. “I was not expecting this kind of attack could happen in my country, to my embassy, to my home.”

It is because of the bravery and heroism of locally employed staff members like the Ladharis that U.S. embassies abroad can function and thrive, said Perez.

“We know that our people are our strength,” said Perez. “And this initiative underscores that message by telling individual stories behind the many accomplishments that people do every day in support of the American people.”