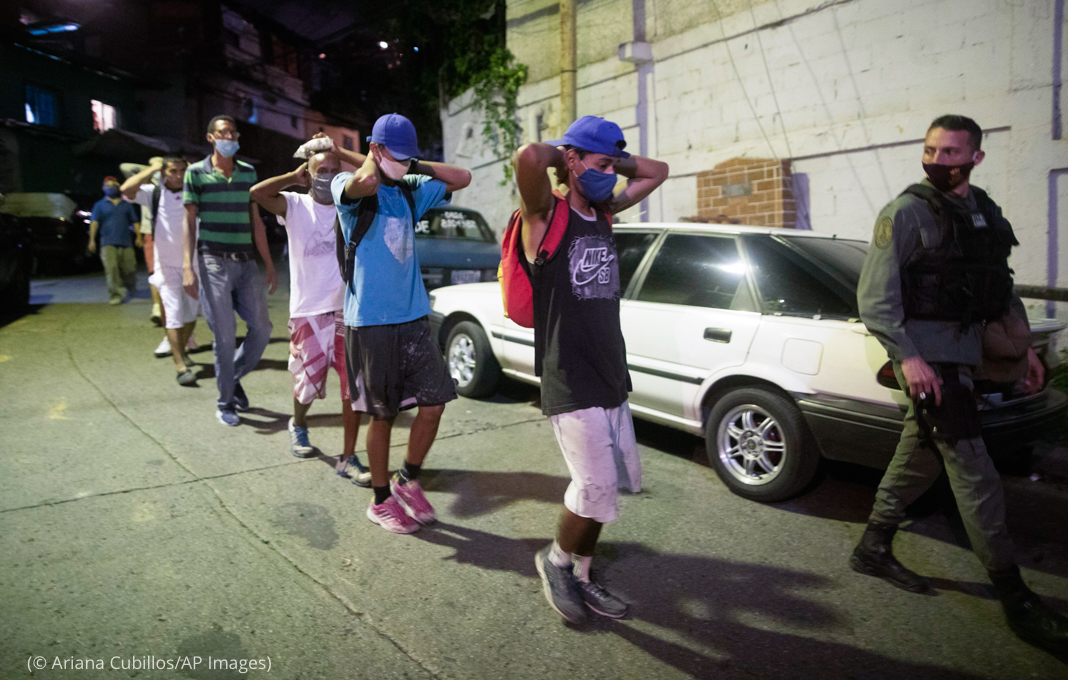 National Guard soldiers escort to a police van a group of people detained for not complying with COVID-19 regulations by breaking curfew and, or attending block parties, in the Petare neighborhood of Caracas, Venezuela, Friday, Aug. 7, 2020, as part of an operation to educate residents on the risks

The illegitimate Maduro regime wants Venezuelans to denounce their neighbors who are sick with COVID-19, calling them “bioterrorists.”

Nicolás Maduro’s National Bolivarian Armed Forces of Venezuela encouraged citizens to look for sick Venezuelans, saying a returning migrant “is a bioterrorist who puts everyone’s health at risk.” They also provided an email address and asked anyone with information to send them “the information of the person and their exact location” so the Maduro regime could detain them.

They told us we’re contaminated, that we’re guilty of infecting the country,” Javier Aristizabal, a nurse from Caracas, told the New York Times. He said he spent 70 days in detention centers after he returned from Colombia in March.

Once these Venezuelans are detained, they are placed in unsafe containment conditions even if they do not display symptoms of COVID-19.

“In commandeered hotels, disused schools and cordoned-off bus stations, Venezuelans returning home from other countries in Latin America are being forced into crowded rooms with limited food, water or masks,” the New York Times reported.

While the illegitimate regime continues to create more problems for Venezuelans during the pandemic, legitimate interim president Juan Guaidó and the legitimate government developed a program to help deliver better medical care to all.

The Héroes de la Salud program helps front-line health workers save lives by giving them the funds and resources they need to fight the virus, according to the National Assembly.

The interim Guaidó government recently accessed frozen funds with the support of the U.S. Treasury Department to pay the salaries of health care workers, providing close to $20 million for the program. Over 60,000 front-line doctors and nurses in Venezuela will receive $100 a month, considerably more than their pay under the Maduro regime.

The program is a recognition of the “men and women who save lives in the middle of an emergency, a pandemic and a dictatorship,” Guaidó said on Twitter, “so that we can continue fighting for the freedom of Venezuela. In the face of challenges, we are going to triumph.”