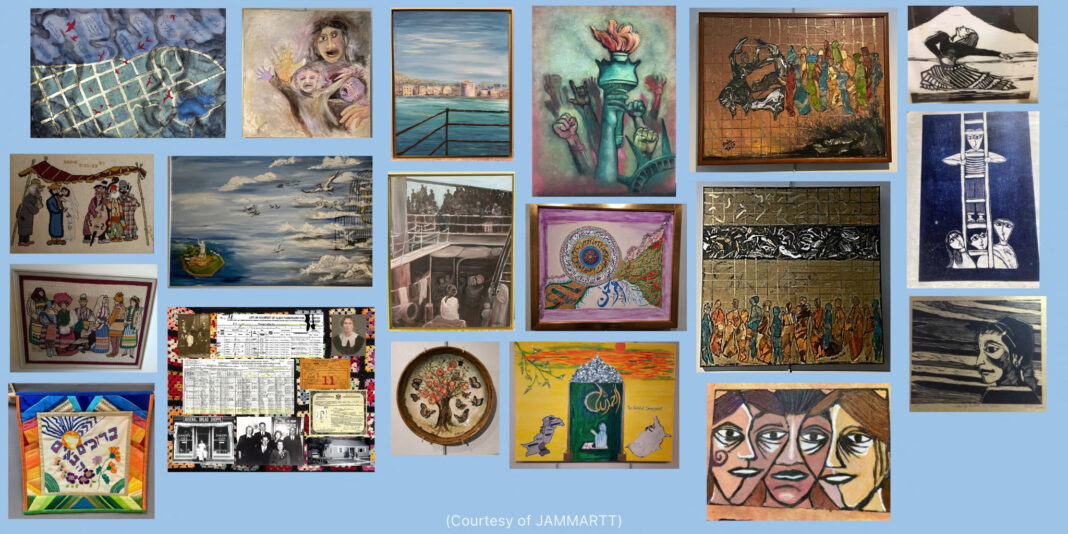 A collage of the artwork in We Got Here from There. The show features 20 pieces by 11 Jewish and Muslim artists. (Courtesy of JAMMARTT)

A colorful embroidered textile piece — made from silks from around the world and inscribed with “Welcome” in Hebrew — hangs at the entrance of an art exhibition by Jewish and Muslim artists.

“It’s always a Jewish tradition to welcome the stranger into your home,” said the shawl’s creator, Shirley Waxman. “I felt that the immigrants — we needed to welcome them into our country and into our homes.”

So begins We Got Here from There: Immigration Stories at the Jewish Community Center (JCC) in Fairfax, Virginia. The show features 20 works by 11 artists. All the artists are either immigrants themselves or recent descendants of immigrants who came to the United States in search of a better life.

The artists in the group Jews and Muslims Making Art Together (JAMMARTT) came together in 2008, driven by the desire to learn about each other’s cultures, religions and histories. Since then, they’ve held several exhibitions about the “convergence of different faiths and cultures through friendship, community, creativity, and hope,” according to their mission statement.

Sarah Berry, the curator of We Got There from Here, says she and the group’s co-founder Betsy Nahum-Miller wanted to show what the two religious groups shared in common and to explore the immigrant journey around the world.

“When I heard of the concept of the exhibition, I thought, ‘This is exactly who we are,’” said Berry, who leads the Bodzin Art Gallery at the JCC. “An art show that tells that story and that captures people’s histories and commonalities really spoke to me.”

Waxman, the group’s other co-founder, said she wanted this show to further a message of inclusion and acceptance. “I like the feeling of welcome — and joy,” she said. “There’s lots of color in it.”

Artist Shela Qamer immigrated to the United States with her husband from Pakistan several decades ago. She says creating her two paintings brought her closer to her family’s immigration experience.

She came to realize how much she appreciated all people who have had to migrate from one country to another. “I remembered the hardships my parents encountered when they migrated from India to Pakistan in 1947. At that time I did not realize how difficult it must have been to leave everything behind and go to a new place.”