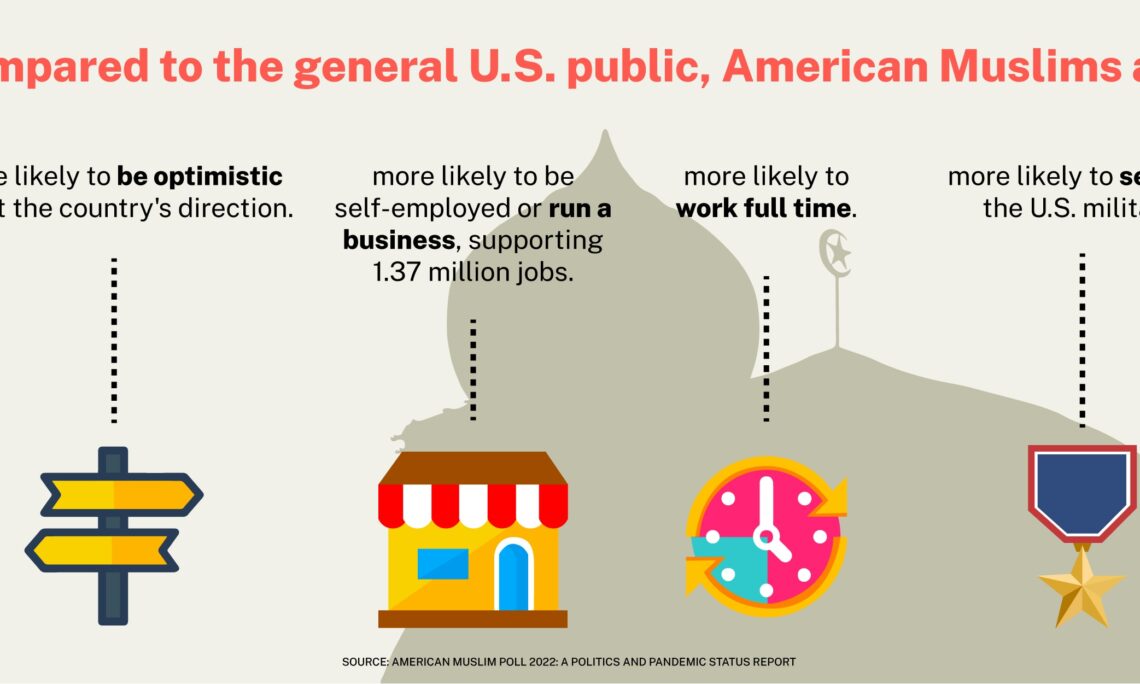 American Muslims are advancing in U.S. society and are more likely than other members of the population to open a business or work full time, according to a new survey.

Of all the groups surveyed by the Institute for Social Policy and Understanding (ISPU), American Muslims are also the most likely to hold an optimistic view of the direction of the United States. Many Muslims volunteer to serve in the U.S. military, with a rate of military service that is slightly higher than the general public.

“This poll presents an updated demographic profile of American Muslims, diving into markers previously presented and new ones, including military service and jobs created, to further flesh out a profile of a growing and changing community,” ISPU, which tracks trends affecting American Muslims, says in the American Muslim Poll 2022: A Politics and Pandemic Status Report.

The report, issued in August, is ISPU’s sixth surveying Muslims, as well as other religious groups and people not affiliated with a religion. It highlights Muslims’ contributions to the U.S. economy and academia. IPSU says Muslims in the United States are more likely to have earned a college degree than others in the American public age 25 or older, with 46% of Muslims graduating college compared to 38% of people overall. The survey also finds that 8% of American Muslims are self-employed or own their own business. Muslim business owners each hire an average of eight workers, supporting an estimated 1.37 million U.S. jobs, ISPU says.

Small businesses (those with fewer than 500 employees) are vital to the U.S. economy. America’s 32.5 million small businesses make up the majority of U.S. companies. Michael Verchot, director of the Consulting and Business Development Center at the University of Washington’s Foster School of Business, recently told ShareAmerica that Muslim small-business ownership is increasing as America’s Muslim population approaches 4 million.

Verchot cites New York City’s 96,000 Muslim-owned businesses and the state of Michigan’s 36,000 as barometers of U.S. Muslims’ growing entrepreneurship that serves both the domestic population and the world. “It’s exciting to see the emergence of American Muslim-owned small businesses that are meeting the needs of customers and clients around the globe,” Verchot said.