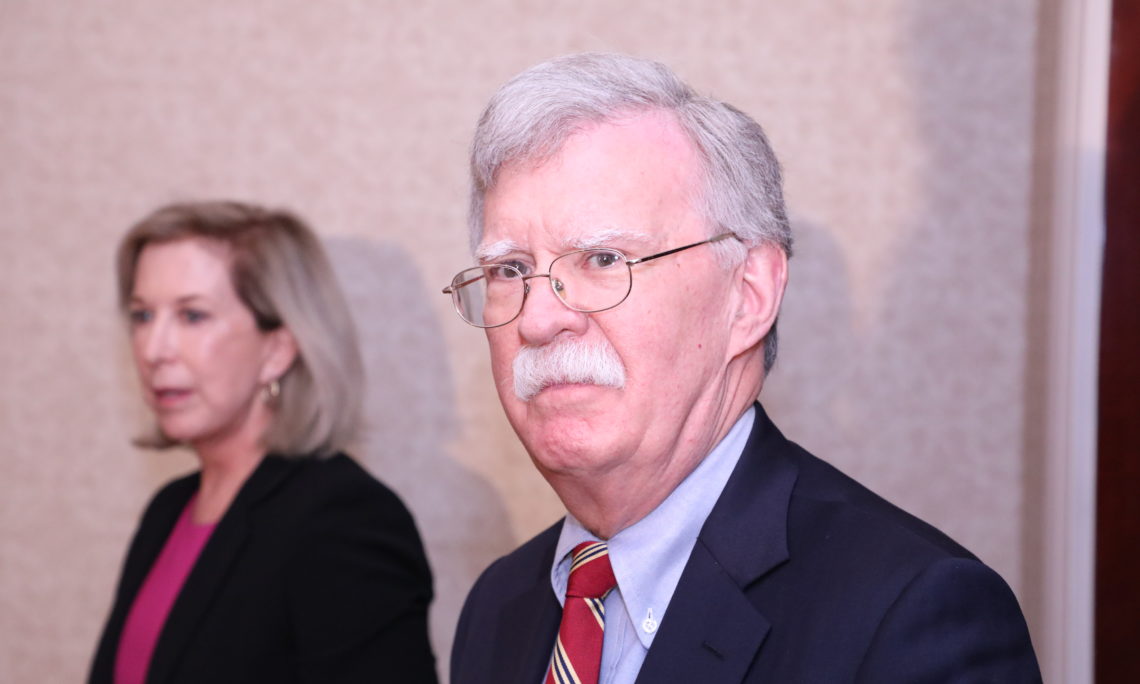 Transcript of responses provided by Reuters

The reasons that we withdrew from the INF treaty as the president has announced, I think, very clearly last Saturday and then repeated again publicly on Monday, are two. Number one is the extent of the Russian violations of the treaty, including the deployment of missiles already [in Europe], which means that after six years of raising with Russia the violations that we see, there is no indication they have any desire to fix the problem. And in fact, we say they are violating the treaty, their position is they are not violating the treaty; so if their position is that they are in compliance, what steps we are supposed to ask them to do that they’ll undertake that will bring them into compliance in a way they say we are not violating already.

But second, even if magically they’ve decided to give up everything that they’ve been doing for the past six years or even longer, you still have the problem that basically there are only two countries covered by the INF treaty – Russia and the United States. China is not covered, North Korea, Iran, Pakistan, India, no other countries are covered. So, we already see China and Iran, to a lesser extent North Korea, [developing] significant intermediate range ballistic missile capabilities. In Asia, it threatens our friends, Japan, South Korea. In the Middle East, it threatens Israel, the Arab states, the Persian Gulf region. Intermediate range missiles from Iran can hit Europe already, and they have many more than Russians deploy. So, while there was theoretically a time, and in fact I thought about it during the George W. Bush administration, there was theoretically a time to universalize the treaty, to bring others into it, it’s just not realistic now to think that China would willingly give up perhaps up to 50 percent of its missile arsenal. It’s just not going to happen. So the treaty, however well-intended and useful in 1987, is a relic of a Cold War. It’s a bilateral treaty between Russia and the United States in a world where we have multiple ballistic missile-capable countries.

There were sanctions that were imposed after the 2008 invasion [of Georgia] by Russia. Those sanctions remain in place, in fact, because they are required by other statutes as well. What I said in Moscow in response to the same question, was yes, we are considering other sanctions under the chemical and biological weapons statute and others. So, I think the Russian spin machine is working overtime because it would certainly be inaccurate to say we are not going to impose any more sanctions on Russia. We are going to do what we are required to do and what we think is necessary.

The timing has nothing to do with the [U.S.] election. I’m just saying it’s under consideration… The timing, it’s a matter of us going through our internal decision-making process.

It will be helpful if [the Russians] would stop interfering in our election, would get out of Crimea and the Donbass in Ukraine, would stop using illegal chemical weapons to conduct assassination attempts against Russian exiles in the West, if they would be less intrusive in the Middle East, and the whole range of other things that they are doing. That’s what causes these sanctions to be put in place, and it’s one of the reasons in Moscow this week I said to pretty much everybody I met, I hope you can see that whatever you thought, whatever benefit you thought you got in 2017 from trying to meddle in the elections, you’ve made things a lot worse for yourself in turning popular opinion against Russia and sawing mistrust and provoking a lot of these sanctions. So, from your own point of view, that’s a good reason not to try and meddle in our elections again.

President Putin said he would be interested in seeing President Trump again and perhaps in Paris. I said we would try to do that. We’re going to have to work arrangements out. But I think one of the most important subjects they will discuss is whether President Putin will accept President Trump’s invitation to come to Washington or will President Putin once again extend his invitation to President Trump to go to Moscow. It’s a very complex issue to work out. These kind of encounters on the margins of multilateral meetings are helpful. I would call them base-touching exercises. For the two presidents [it] would be the first time they’d met since Helsinki and I think that’s useful. I think what President Trump would like, would be more of an opportunity to discuss the issues at length and we’ll have to see when it gets on the schedule.

I don’t think at this point I’m aware of any kind of sanctioning on the sovereign debt issue. It might come into effect, might be affected, if it’s involved in a financial transaction that’s associated with different sanction transaction, but it’s not on a debt itself.

I think it will be helpful for the United States to have strategic discussions about how [the Russians] see China going forward, what strategic issues they see. The United States does not have a southern border with China, the United States does not face many of the problems that Russia does in the Russian Far East. So, I think the question of whether there can be U.S.-Russian cooperation on China is something we have to explore, because if China’s belligerent activity – like getting this IRBM capability that doesn’t threaten us at all, we are out of range, but it threatens Russia right into the Russian heartland – I think that’s something very much on their mind.

That’s one reason I’m here – to show the importance of the region broadly to the United States. I think President Putin got that message. When we were saying goodbye, he said: “Oh, you are going to the Southern Caucasus.” I think it’s important to demonstrate to the [greatest] extent possible that we do see Georgia as a strategic partner, that bilateral relations are very important to the United States and as good as it is today, we’d like to broaden and deepen it.

I’ve talked about [Iran] in all four countries that I’ve visited. I want to alert all of them that we’re going to assert maximum pressure on Iran with countries here. I want to explain that we hope to minimize the damage to them. We want to put a squeeze on Iran, not on them. They have already been in discussion with the embassies respectfully in different capitals, with the State Department, Treasury Department and others back in Washington. I think there are some solutions we’ve seen already and perhaps others can be worked out. So, we want to achieve both objectives – maximum pressure on Iran, but minimum damage to our friends in the region.