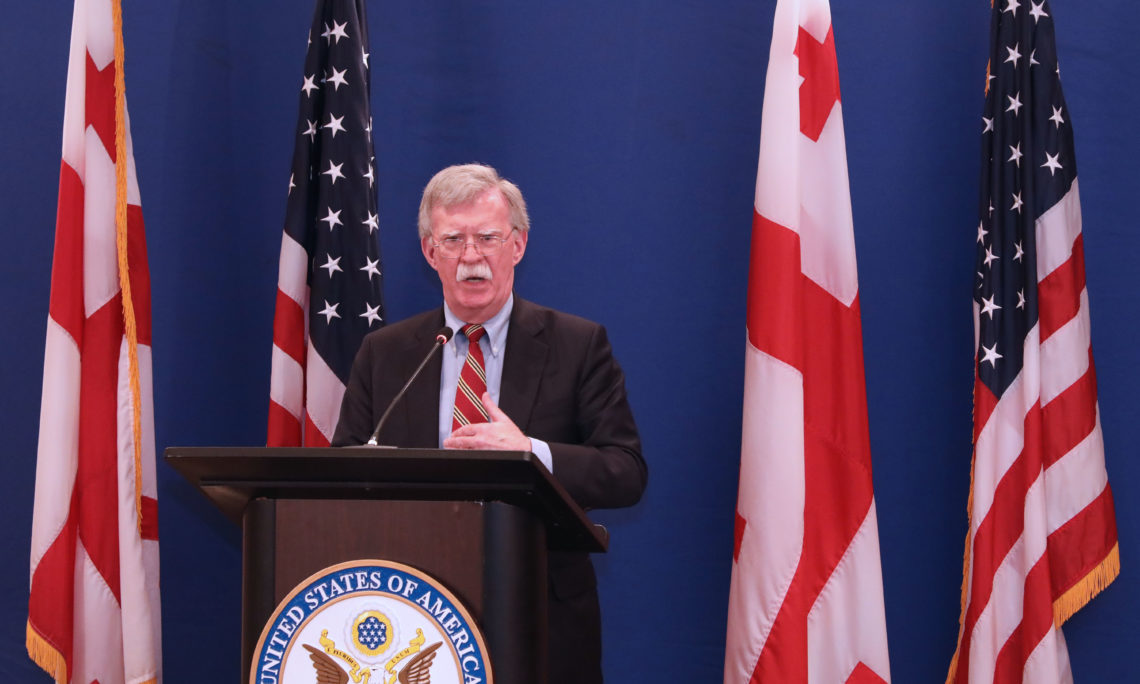 Ambassador Bolton: Thank you very much for being here today. I am delighted to be in Georgia. This is the first time here for me. I had excellent meetings with the Prime Minister, the Minister of Foreign Affairs, the Minister of Defense, and the Minister of Interior, covering a whole range of issues about the situation in the region, in the U.S.-Georgia bilateral relationship. For my part, I stressed how important the U.S.-Georgia relationship was. We consider it one of our highest priorities. It is in a strategic area of interest for the United States. We have been a strong supporter of Georgia’s independence and territorial integrity from the time of the collapse of the Soviet Union. Our position hasn’t changed throughout the entire period, and with the Prime Minister and his top national security team, we talked about ways to broaden and deepen the bilateral relationship and how we can work together throughout the region. So overall, I would describe the visit and the meetings today as very positive and very productive. And I’d be happy to answer any questions.

Georgian Public Broadcaster (GPB): Mr. Ambassador, we know that a few days ago you were in the Russian capital, where you met with President Putin and other senior officials. My question now is related to Georgia’s occupied territories. We are interested to know, especially in the light of the anticipated meeting of President Trump and President Putin that we know should take place in November, will Georgia be a topic for consideration in the Russia- U.S talks? And the second part of my question is related to the sanctions that the United States has already imposed on Russia because of Russia’s occupation of part of Ukrainian territories. Is your government considering any kind sanctions to be imposed on Russia due to the occupation of Georgia’s territories?

Ambassador Bolton: In fact, a number of sanctions are in place against Russia, going back to the invasion of Abkhazia and South Ossetia in 2008. And others were enforced through multiple reasons, so such sanctions do exist; whether the two presidents will be able to talk about Georgia in the meeting in Paris, if it takes place, I do not know. It will be a brief meeting; it is what we call a meeting on the margins of the French celebration of the 100th anniversary of the armistice in World War One. We have invited President Putin to Washington after the first of the year for basically a full day of consultations. I would say it is more likely to come up then. What the schedule of that is, we do not quite know yet. But I can tell you I did discuss the region with some of the cabinet officials in Russia, and as I was finishing my meeting with President Putin and we were saying goodbyes he said, oh you are going to the South Caucasus the next day. So I think it had his attention.

TV Company Rustavi 2: Mr. Ambassador, since you are in Georgia just a few days before the election, I would like to ask about your views as it regards the polling findings, not the ones conducted by the political parties, showing that the ruling party candidate is losing and the opposition candidate is winning. On the other hand, the ruling Georgian Dream Party has presented the polling results, (without providing the information who exactly conducted the polls) that claim their candidate is winning in this election. So, after the election on October 28, if there is an impression of rigging and manipulating the elections, and the ruling Georgian Dream Party tries to match the result of the elections with their poorly substantiated polls, what kind of reaction can there be on the part of the United States? How tough can this response be? Can we also presume that Washington may think about sanctions to be imposed on some senior [Georgian] officials or on Bidzina Ivanishvili himself, especially as Congress had considered to initiate freezing his bank accounts?

Ambassador Bolton: The last thing I am going to do, two days before the election, is to comment on it or on polls that are not even under our system. I cannot even campaign in the United States for candidates who support the Republican Party. There is going to be a large number of international observers present here, including many from the United States, I have been told by officials I met with today. I think it is in Georgia’s interest to have a completely open and transparent election. That is one of the strengths of representative government: people vote, you have confidence in the integrity of the electoral system, and I certainly hope that is something we want to see carry on here. I would rather not speculate on what may happen. I hope for a free and fair election

Bloomberg: First of all, thank you for your continuous support for Georgia. My question would be regarding the Jamal Khashoggi case. We want to know what the CIA Director found during her visit to Turkey and do you think that the crown prince can remain as prince after what has been discovered?

Ambassador Bolton: I’m going to take a pass on your question. I would rather confine the discussion to the subject of my visit here in Georgia. The President and the Vice President and others have been speaking out on this issue. They obviously speak definitively for the United States and I would just as soon leave it with them; obviously, I am at quite a distance here in Georgia. They are much more up to date on the latest and they will be articulating the United States’ position.

Imedi TV: I would like to ask you about bilateral relations. You have talked a little about expanding these relations. Officially, Tbilisi sees a lot of potential for expanding ties in already existing strategic spheres and expects to have a specific action plan in this regard. It is also considered that you have specific views on how to go forward. Can you please expand on which spheres you see for broadening the strategic partnership, and if there are any new fields for cooperation between the United States and Georgia?

Ambassador Bolton: I think there are a number of ways we can to enhance the bilateral military relationship. We had a number of conversations about those today. And I think we will be thinking about them in Washington; certainly, on the economic side, there are all kinds of opportunities for increased American trade investment in Georgia. Almost everybody I spoke with talked about Georgia’s desire to have a Free Trade Agreement with the United States. I think that is certainly something that we are looking into. And I think on a range of other issues, with information-sharing and other things we can do together. So, the foundation, I think is very good right now. And, I think, whatever the course of the NATO application – I was a member of George W. Bush administration, we supported that right up until April 2008 – it is something that, I think, remains U.S. policy. We just have to see what the appropriate timing is with our friends in Europe.

Radio Free Europe/Radio Liberty: National security is hard to imagine without strong democratic development and the effort of combatting corruption. Recently, the International Anti-Corruption Network and Transparency International’s Berlin Bureau commented on “state catch-up” in Georgia, which is the most serious form of corruption. I would like to ask to what extent is the United States – Georgia’s main strategic partner –paying attention to this and what is the reaction? And, when are we going to have a new ambassador in Georgia?

Ambassador Bolton: The answer to the last one, I really cannot give an answer, given the vagaries of the Senate confirmation process, the complexities of getting nominated, but I think, Elizabeth Rood, the Chargé, is doing an excellent job here and will continue to work until we get an ambassador. In terms of the corruption question, you know, corruption is not just, preventing corruption is not just something that is an abstract good from the U.S. perspective; countries with serious corruption problems are difficult for American firms to trade and invest with, because of our Foreign Corrupt Practices Act. So, we see it as in America’s interest to have non-corrupt economies in the countries where we want to do business. I had just a brief lunch – because I wanted to come and see all of you – but I had a brief lunch with the American Chamber of Commerce. I asked all of them what their experience with corruption was and I will summarize their answers: they felt that there is a certain level of it that you find in most counties around the world, even in the United States, but they did not see this it as a serious obstacle in Georgia.