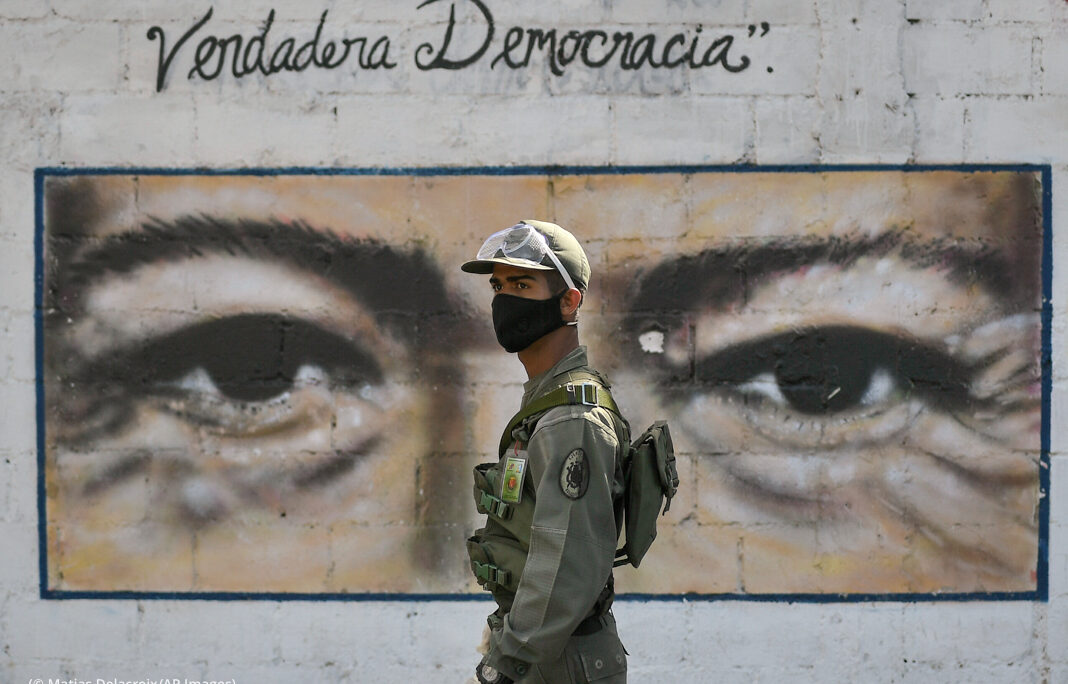 A soldier guards a voting poll at a school that has the eyes of the late President Hugo Chavez painted on a wall during elections to choose members of the National Assembly in Caracas, Venezuela, Sunday, Dec. 6, 2020. The vote, championed by President Nicolas Maduro, is rejected as fraud by the nati

Countries around the world are calling the illegitimate Maduro regime’s recent attempt to undermine democracy in Venezuela a sham.

On December 6, the Nicolás Maduro regime unconstitutionally staged National Assembly elections with the intention of overthrowing the democratically elected politicians who stand against Maduro and his cronies.

The result was an undemocratic and illegal farce.

Since the vote on Sunday, more than 55 countries, including members of the Organization of American States (OAS), the Lima Group, the European Union, and the International Contact Group condemned the elections and refused to recognize them as legitimate.

“The United States, along with numerous other democracies around the world, condemns this charade which failed to meet any minimum standard of credibility,” said Secretary of State Michael R. Pompeo on December 7. “Maduro brazenly rigged these elections in his favor through the illegal seizure of political parties’ names and ballot logos, manipulation of the process by his loyalist electoral council, violence and intimidation, and other undemocratic tactics.”

In the months leading up to the December 6 elections, nations, international bodies and nongovernmental organizations around the world opposed the Maduro regime’s attempt to reconfigure the electoral process. Many cited the humanitarian crisis inside Venezuela and the regime’s stifling of free speech as reasons it would not be possible for Venezuela to have free and fair legislative elections.

The U.S. condemns the illegitimate Maduro regime’s fraudulent Dec. 6 legislative elections. They do not meet any minimum standard of credibility and are nothing more than an attempt to steal Venezuela’s democratic future. We call on all countries to reject this electoral sham.

“This lack of respect for political pluralism and the disqualification and prosecution of opposition leaders do not allow the EU to recognise this electoral process as credible, inclusive or transparent, and its results as representative of the will of the Venezuelan people,” the EU said in a statement.

The United Kingdom said, “The UK recognises the National Assembly democratically elected in 2015 and recognises Juan Guaidó as interim constitutional President of Venezuela.”

The U.S. government stands in agreement with its international allies, Pompeo said.

“Neither Maduro nor a new, fraudulently elected National Assembly will represent the legitimate voice of the Venezuelan people,” Pompeo said, “which should be expressed through free and fair presidential elections.”