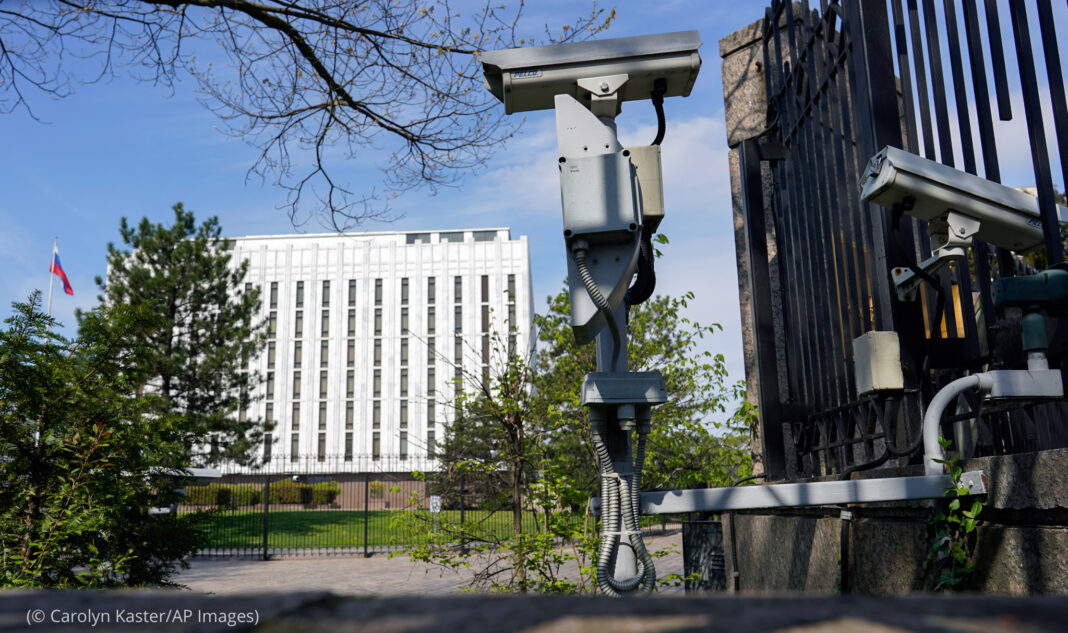 The United States is imposing sanctions in response to the Russian Federation’s malign behavior. Security cameras monitor the grounds of Russia’s embassy in Washington on April 15. (© Carolyn Kaster/AP Images)

The United States is imposing consequences on the Russian government for cyber intrusions, attempted election interference and other “reckless” conduct against the United States and its allies.

More than 20 countries issued statements expressing solidarity with or support for the United States.

Using new authority under the order, the U.S. Department of the Treasury sanctioned those involved in Russian election interference efforts and technology companies that support Russia’s cyber program. The Treasury also blocked certain financial dealings in Russian sovereign debt to impose costs on the regime.

“These actions are intended to hold Russia to account for its reckless actions,” Secretary of State Antony Blinken said, faulting the Russian government’s cyber intrusions and attempts to interfere in the 2020 U.S. election. “We will act firmly in response to Russian actions that cause harm to us or our allies and partners.”

Blinken also expressed concern for the health and treatment of Russian opposition leader Aleksey Navalny and called for his unconditional release.

All available evidence points to Russia’s responsibility for the #SolarWinds hack.
⁰#Russia continues to demonstrate a pattern of destabilising behaviour, and all #NATO Allies stand in solidarity with the U.S. following its announcement today.

The Treasury sanctions target 16 entities and 16 individuals that attempted to interfere in the 2020 U.S. elections at the direction of the Russian government.

On April 15, the United States formally named Russia’s foreign intelligence service, known as the SVR, as the perpetrator of the SolarWinds compromise, part of a cyber espionage campaign with the potential to disrupt more than 16,000 computer systems globally.

As part of the day’s actions, the National Security Agency, the Cybersecurity and Infrastructure Security Agency and the FBI issued a cybersecurity advisory that provides specific details to assist in identifying and responding to the SVR’s malicious cyber activity.

The State Department also announced programs to train international partners to respond to cyber incidents, part of a strategy to promote cybersecurity worldwide.

“Russia continues to demonstrate a sustained pattern of destabilising behavior,” NATO said in its April 15 statement. “We stand in solidarity with the United States.”