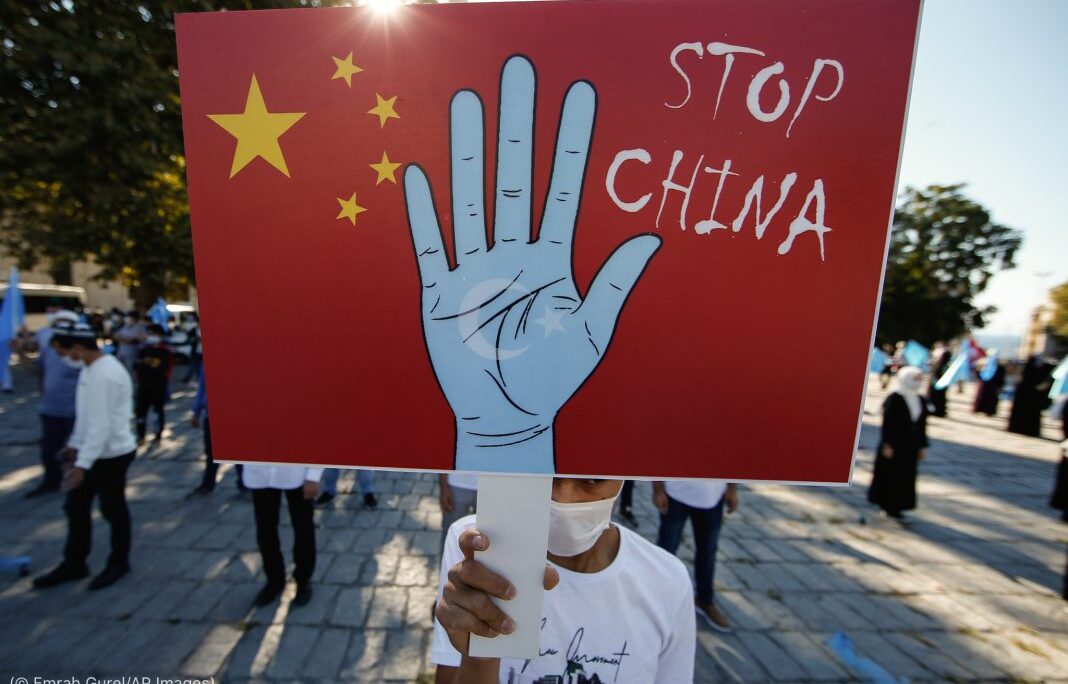 A Uyghur protester holds a sign October 1 during a demonstration in Istanbul, Turkey. (© Emrah Gurel/AP Images)

The Chinese Communist Party’s human rights violations are drawing international outcry. Dozens of countries demand the CCP end its mass internment of Uyghurs and other abuses.

In an October 6 joint statement to the United Nations, 39 countries fault the CCP’s increasing number of “gross human rights violations” against ethnic and religious minorities in Xinjiang province and the regime’s authoritarian behavior in Hong Kong.

“We are gravely concerned about the human rights situation in Xinjiang and the recent developments in Hong Kong,” the statement says. “We call on China to respect human rights, particularly the rights of persons belonging to religious and ethnic minorities, especially in Xinjiang and Tibet.”

The CCP’s abuses in Xinjiang and in Hong Kong are part of its broader campaign of repression, which includes persecuting religious minorities, jailing journalists and rights advocates, and invasively monitoring its own people.

Since 2017, the CCP has imprisoned more than 1 million Uyghur and other Muslim minorities in internment camps, where Muslims are forced to renounce their religious identities and swear allegiance to the CCP. Torture and forced sterilization have also been reported in the camps in Xinjiang.

.@SecPompeo: The CCP has put more than a million innocent people in internment camps. It has perpetrated an unrelenting war on faith, even reportedly forcing abortions and sterilizations. This is the stain of the century that tells us the true nature of the regime. pic.twitter.com/0cL7xyTNgU

In Tibet, Beijing has banned monasteries from teaching the Tibetan language, prevented and punished veneration of the Dalai Lama, forced children to leave their homes to attend government-run boarding schools, and issued official interpretations of Tibetan Buddhism that conform with CCP ideology, essentially removing Tibetan identity from the religion.

In classrooms in Inner Mongolia, the CCP is replacing the Mongolian language with Mandarin Chinese, a policy minority groups see as a threat to their culture.

The CCP detains lawyers, activists and journalists, often on broadly defined charges that are subject to arbitrary enforcement.

In 2019, China arrested more journalists than any other country in the world, according to the Committee to Protect Journalists’ annual survey. The regime has also arrested activists and citizen journalists for calling for election of party leaders, for criticizing the government’s response to the initial COVID-19 outbreak in Wuhan, and for raising environmental or human rights concerns.

Beijing passed the Hong Kong National Security Law in June, subjecting the city more directly to CCP rule and contravening international law by violating the terms of the Sino-British Joint Declaration of 1984, a U.N.-registered treaty.

The law is a “comprehensive assault on the city’s autonomy, rule of law and fundamental freedoms,” nearly 200 leaders from more than 20 countries said in a May 23 joint statement, according to Reuters.

The CCP surveils everyday citizens who risk running afoul of the party simply by sharing political views online or warning colleagues of the new coronavirus.

Chinese authorities silenced doctors and suppressed information about the human-to-human transmission of the coronavirus for three weeks after notifying the World Health Organization of an outbreak December 31.

Secretary of State Michael R. Pompeo told reporters October 14 in Washington that the United States is building a global coalition to pressure the CCP to respect human rights.

“We simply are demanding of the Chinese Communist Party what we ask of every nation,” Pompeo said, “to preserve basic freedoms, human dignity, religious freedom for every one of their citizens.”