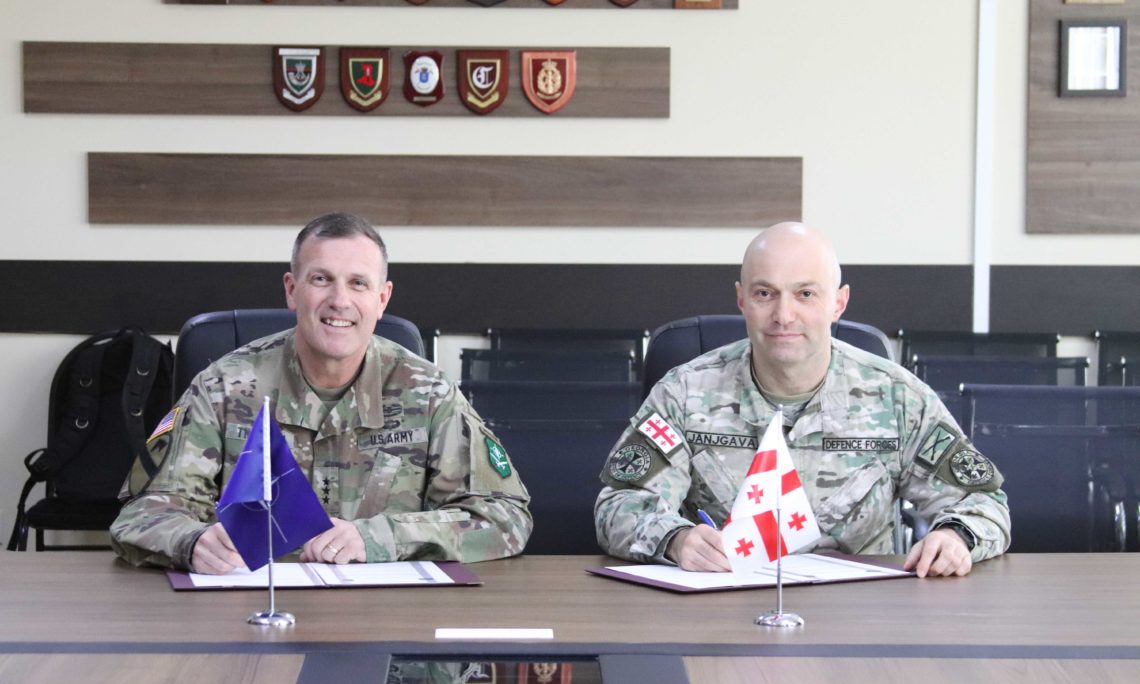 During the closing ceremony of NATO-Georgia Exercise 2019, Thomson shared a few words.

“History teaches us that strength deters aggression,” Thomson said. “Given today’s complex, dynamic and uncertain security environment, it is vital to be ready and strong. Strength not only comes from economic might or military might, but it also depends on trusted friends. In Georgia, we have extraordinary friends, and for that, NATO is exceptionally grateful.”

Janjgava agreed. “This exercise has proved to be very productive and well-coordinated in terms of sharing experience and improving the efficiency of the GDF through a practical application of NATO exercise planning and execution processes,” he said. “We are able to conclude that the exercise fulfilled its objectives, which are to enhance our capabilities to plan and execute multinational crisis response operations and to further improve our interoperability with the Allied staffs.”

The purpose of the letter is to establish the framework for future cooperation between NATO’s LANDCOM and the GDF in the land domain. As Europe continues to respond to the aggressive actions of a potential adversary, this cooperation has deep implications in the NATO deterrence mission and in the efforts of NATO member nations and partner nations in the collective defense of Europe.

Georgian Col. Alexander Kiknadze, Commander of the GDF’s Eastern Command, emphasized the importance of the letter, “we are truly committed to future cooperation with NATO.”

The senior leaders signed the letter just prior to the closing ceremony of the second iteration of the NATO-Georgia Exercise, which is a computer-assisted command post exercise focused on the interoperability and readiness of GDF as they are the lead of a multinational brigade with troops from 24 participating NATO member and partner nations. The exercise is scheduled every third year as a part of the Substantial NATO-Georgia Package framework, a set of 15 defense capacity building initiatives between NATO and Georgia established during the Wales Summit in 2014 and reinforced at the Warsaw Summit in 2016. The first iteration of this exercise occurred in 2016 involving 15 NATO member and partner nations.

During this year’s exercise, the Georgian led multinational brigade headquarters staff planned, coordinated and executed a scenario-based military response to a humanitarian crisis. The exercise tested the interoperability of Georgian, member and partner nation forces in the ability to adopt a comprehensive approach to a non-article 5 crisis response involving civil-military cooperation with international organizations and non-governmental organizations. This brigade-level exercise is scheduled by NATO Allied Command Transformation, conducted by the Georgian General Staff with mentoring from NATO Allied Land Command and directed by the NATO-Georgia Joint Training and Evaluation Centre mentored by NATO Joint Force Training Centre.

“Georgia today is a critical partner for the NATO Alliance,” Thomson said. “Nothing speaks to commitment like boots on the ground and … I witnessed it first hand from Georgia on a daily basis [in Afghanistan].” The letter of cooperation is mutually beneficial to enhance readiness, capability and capacity and is a win-win for all.