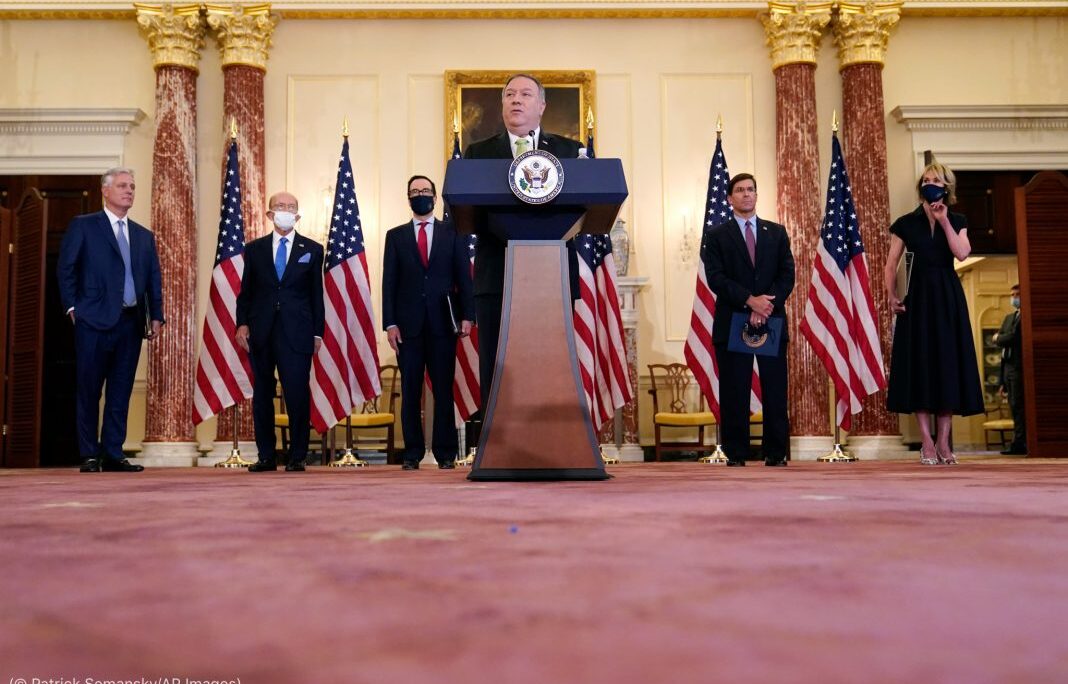 The United States is imposing sanctions to block the Iranian regime’s nuclear, ballistic missile and conventional arms programs and to curb the spread of violence by Iran in the Middle East and beyond.

“My Administration will never allow Iran to have a nuclear weapon, nor will we allow Iran to endanger the rest of the world with a fresh supply of ballistic missiles and conventional arms,” Trump said, announcing the September 21 executive order.

The new measures follow the reimposition or “snapback” of U.N. sanctions that were terminated as a result of the failed 2015 Iran nuclear deal. The snapback, which took effect September 19, extends the U.N. conventional arms embargo and obligates Iran’s regime to refrain from testing ballistic missiles and suspend enrichment-related activities, which could support development of a nuclear weapon.

U.S. Secretary of State Michael R. Pompeo said in a September 21 news conference that the flawed 2015 Iran nuclear deal gave Iran a pathway to a nuclear weapon and allowed the regime access to billions of dollars to support proxy wars in the Middle East.

Through economic sanctions, the United States has saved countless lives by denying Iran’s regime $70 billion in revenue it would have used to support terrorism, Pompeo said.

Rather than waiting for Iran to threaten the world, the U.S. is taking sweeping actions to prevent the world’s top state sponsor of terror from obtaining a nuclear weapon. This includes sanctions on 25 entities and individuals. We are keeping Americans and world citizens safe!

New U.S. sanctions target key actors that support the regime’s nuclear and ballistic missile programs, including its Nuclear Science and Technology Research Institute and the Mammut Industrial Group, among others.

The U.S. Department of Commerce added to its Entity List five Iranian scientists who assist with the regime’s nuclear program. The list identifies individuals who are engaged in activities that are contrary to the national security or foreign policy of the United States.

And the U.S. Department of State designated Iran’s Ministry of Defense and Armed Forces Logistics, and Iran’s Defense Industries Organization, both of which sought to evade the U.N. weapons embargo.

The U.S. action comes as Iran’s regime continues to evade U.N. sanctions, even as its neighboring countries move toward peace. A recent U.N. report indicated that Iran’s regime defies the U.N. arms embargo by providing arms to proxy groups and terrorist organizations across the Middle East.

The United Arab Emirates and Bahrain recently agreed to normalize relations with Israel. The agreements, brokered by Trump, improve prospects for peace and prosperity in the Middle East.

“The Iranian regime must change its behavior if it hopes to provide what the Iranian people so desperately want and deserve: a thriving and prosperous Iran,” Trump said in a September 21 statement.