Home Home | News & Events | OAS: Elections in Venezuela will not be free and fair 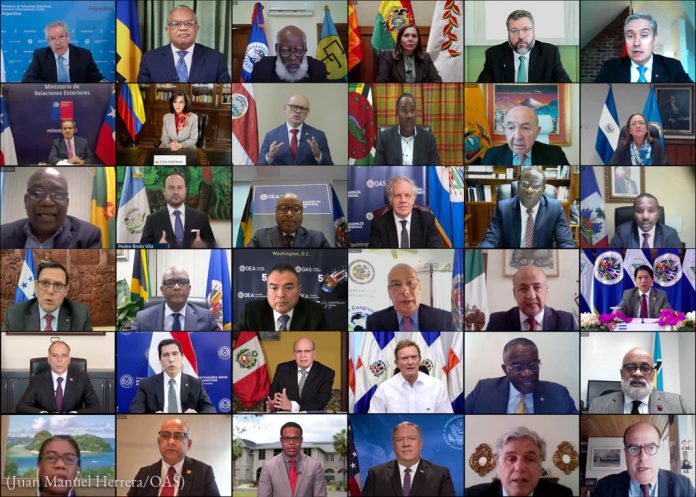 Participants voted on a new resolution about the state of democracy in Venezuela during a virtual meeting of the Organization of American States. (Juan Manuel Herrera/OAS)

The Organization of American States General Assembly passed a resolution October 21 declaring the illegitimate Maduro regime’s December 6 elections in Venezuela will be fraudulent.

“We all know there is more work to do to uphold our hemisphere as a hemisphere of freedom,” Secretary of State Michael R. Pompeo said October 21 during his virtual remarks to the 50th OAS General Assembly. “Nicolás Maduro’s plan to hold fraudulent elections in December to steal the National Assembly — Venezuela’s last democratic institution — is only the latest abuse of power.”

Colombia introduced the resolution, stating that, as it stands, free and fair elections cannot be held in Venezuela.

Elections that are free and fair “will depend on the existence of the necessary conditions of freedom, justice, impartiality and transparency,” the resolution states, “with guarantees for the participation of all political actors and citizens and the release of political prisoners, under reasonable deadlines for their organization, and with independent and credible international electoral observation.”

The resolution details concerns about the illegitimate regime’s violation of national election laws. It asserts the regime actively seeks to undermine the electoral process, which could eliminate the last democratic institution inside of Venezuela: the National Assembly.

The resolution also reaffirms the legitimacy of the National Assembly and the need to protect members of the assembly from attacks by the illegitimate Maduro regime.

Addressing the dire and worsening human rights situation within Venezuela, the resolution calls for immediate, unimpeded access to deliver humanitarian aid to the most crisis-stricken and vulnerable populations.

The OAS General Assembly resolution says more needs to be done inside of Venezuela before democratic elections can take place.