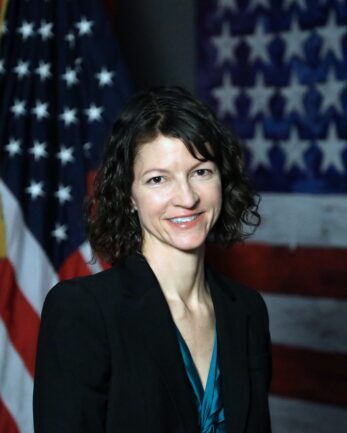 Rian Harker Harris is a career member of the Senior Foreign Service with the rank of Counselor. During her more than twenty-year career she has served overseas in public diplomacy, political, economic, and consular roles at the U.S. Embassies in Spain, Serbia, Afghanistan, Pakistan, Guatemala, and Armenia, as well as at the U.S. Consulate in Vladivostok, Russia. While in Armenia from 2003-2005, she was frequently detailed to Georgia to support Mission operations during and after the Rose Revolution.

In Washington, D.C, from 2011-2012 she served as a Director for European Affairs at the White House National Security Council under President Barack Obama and Vice President Joe Biden, where she was responsible for the Caucasus and six countries in Southern Europe. From 2010-2011, she was the Special Assistant to the Assistant Secretary of State for European and Eurasian Affairs.

During her career, Ms. Harris has focused on public diplomacy and political-military affairs. She has served as Mission Spokesperson at three embassies, represented the U.S. on NATO Provincial Reconstruction Teams in Herat and Badghis, Afghanistan, supported negotiations to base four U.S. destroyers and the post-Benghazi Marine response force in Spain, and led interagency efforts to expand U.S. defense cooperation with Georgia.

Ms. Harris holds a master’s degree in public policy from the School of Public and International Affairs at Princeton University, and a bachelor’s degree in Russian studies and environmental science from the College of William and Mary. She has studied Georgian, Russian, Serbian, Spanish, and Dari. Ms. Harris was raised in rural Nelson County, Virginia. Her husband, Christopher, is also a Foreign Service Officer. They have two daughters.