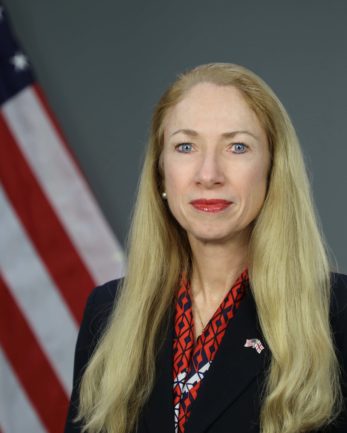 Kelly Degnan is a career member of the Senior Foreign Service with the rank of Minister-Counselor.  She arrived in Tbilisi on January 29, 2020, to serve as U.S. Ambassador to Georgia.

During her almost 30 -year career, Ambassador Degnan has focused on political and political-military affairs.  She was the Deputy Chief of Mission and Chargé d’Affaires ad interim in Rome and Pristina, and also served overseas at the U.S. Embassies in Botswana, Pakistan, and Turkey.

Ambassador Degnan was the Senior Civilian Representative to Brigade Combat Team Salerno in Khost, Afghanistan, where she earned the Secretary of State’s Expeditionary Service Award, one of many awards she has received throughout her career.  Ambassador Degnan was also the Political Advisor to the four-star Commander of U.S. Naval Forces Europe and U.S. Naval Forces Africa, and the Political Counselor at the U.S. Mission to the North Atlantic Treaty Organization.