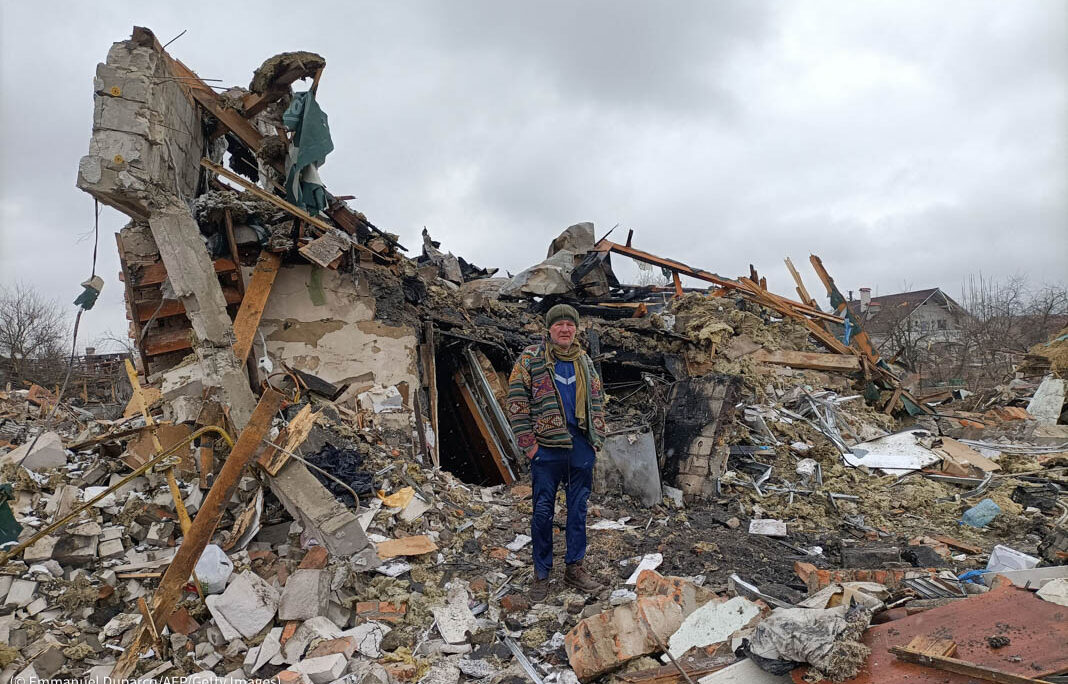 In a historic vote, the U.N. General Assembly condemned the Russian government's war against Ukraine. Above, a Ukrainian man stands in rubble after a Russian bombing March 2. (© Emmanuel Duparcq/AFP/Getty Images)

Nations around the world are denouncing the Russian government’s unprovoked and unconscionable war against Ukraine. On March 2, in a rare emergency session, the United Nations General Assembly overwhelmingly voted to condemn Russia’s attack on Ukraine and demand that Moscow immediately end its military operations in Ukraine. “This extraordinary move by the United Nations demonstrates the extent of global outrage at Russia’s horrific assault on a sovereign neighbor and showcased unprecedented global unity,” President Biden said after the vote. The meeting marked the first time in 40 years that the Security Council had convened an emergency special session of the General Assembly.

A total of 141 U.N. member states voted in favor of the resolution (PDF, 201 KB) supporting Ukraine’s sovereignty and territorial integrity while condemning Russia’s further invasion. Only five countries voted against the resolution — Russia, Belarus, Syria, Eritrea and North Korea — while 35 countries abstained. “The message of the General Assembly is loud and clear,” U.N. Secretary General António Guterres told reporters after the vote. “End hostilities in Ukraine — now. Silence the guns — now. The ticking clock is a time bomb.”

“The world has spoken with a clear, united voice,” said Ambassador Linda Thomas-Greenfield, the U.S. representative to the United Nations. “We have demonstrated that Russia is isolated and alone.” The United States has already deployed sanctions designed to hold the Kremlin to account and weaken Russia’s ability to continue using force and imposed new limitations on what can be exported to Russia. Other countries also have taken actions to sanction Russia’s leaders and financial institutions to hamper Moscow’s ability to continue fighting. Across the world, peaceful protesters wearing the colors of the Ukrainian flag are demonstrating their support for Ukraine and condemning the Russian government’s actions. “Most of the men and women fighting in Ukraine were not even born the last time the United Nations came together in this way to unite for peace,” Thomas-Greenfield said.

An overwhelming number of the U.N. member states also called on Belarus to stop allowing its territory to be used as a staging ground for Russia’s invasion. Belarus has been complicit in the invasion of Ukraine by providing material support to the Russian armed forces. Russia’s bombing campaign has struck homes, schools, hospitals, burial grounds and an area near the Babyn Yar Holocaust Memorial Center. The U.N. estimates that 1 million people, half of them children, have already fled Ukraine because of Russia’s attacks, with more making their way to safety.

“We have affirmed the U.N. Charter, pledged to address the horrific human rights and humanitarian crisis in Ukraine, and stood together in the battle for the soul of the world,” Thomas-Greenfield said after the vote.