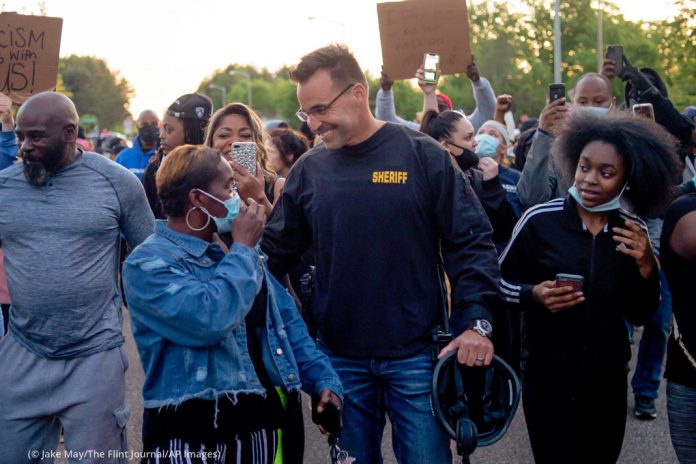 Americans often have different opinions on how to tackle pressing social challenges, but U.S. citizens share a respect for the right to free speech, free expression and peaceful protest.

Some police leaders have joined peaceful demonstrations in the aftermath of the death of George Floyd in law enforcement custody.

“The only reason we’re here is to make sure that you’ve got a voice, that’s it,” Genesee County Sheriff Chris Swanson told demonstrators in Michigan during a May 30 exchange posted to Fox News’ website.

Swanson added that Floyd’s treatment at the hands of four police officers in Minneapolis does not accurately reflect law enforcement in the United States. “We go out there to help people, not do that nonsense.”

Minnesota state prosecutors have charged a Minneapolis police officer with second-degree murder in connection with Floyd’s killing May 25. The state has charged three other officers with aiding and abetting, and the U.S. Department of Justice has also opened a civil rights investigation, according to a June 4 statement from the department.

When protesters asked Swanson to march with them, he joined their demonstration.

Similar displays have occurred in other U.S. cities, where police have joined peaceful demonstrations, holding signs calling for equality among all people.

“I thought it was appropriate,” he told reporters. “We hugged to show there’s solidarity.”

Police Chief Joseph Wysocki marched with demonstrators in Camden, New Jersey, walking at the head of the demonstration and holding a banner that read “Standing in Solidarity.”

Police officers in Austin, Texas, marched with University of Texas football players from the school’s campus to the steps of the state capitol building. And in Baltimore, police officers knelt alongside demonstrators in front of City Hall.

Swanson says he is planning more meetings with demonstrators to ensure that recent solidarity through peaceful protest brings lasting improvements in the community.