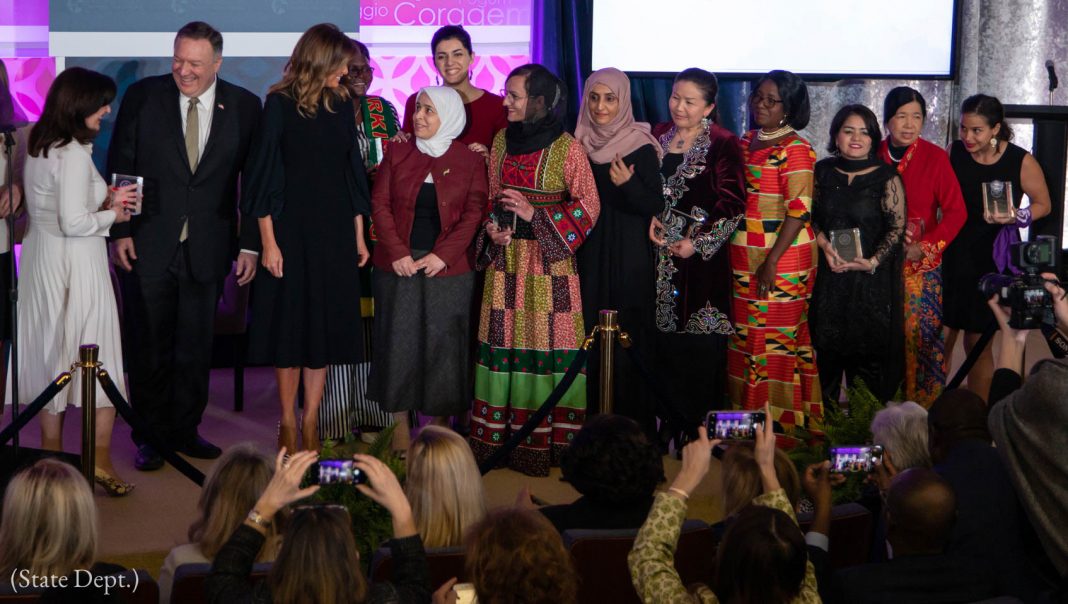 Peacemakers, activists, lawyers, journalists, politicians and defenders of human rights. These are the recipients of the 2020 International Women of Courage Award.

“We are here to honor a quality that all of the women onstage possess, and that is courage,” said first lady Melania Trump at the March 4 awards ceremony. “Through their work, they empower women everywhere.”

Each year, the State Department honors women from across the world for their bravery, leadership and tenacity. Since 2007, the United States has recognized more than 146 awardees from 77 countries.

“The world needs women who continue to be willing to take risks and summon courage,” said Secretary of State Michael R. Pompeo. “And unquestionably, today’s awardees are doing just that.”

Zarifa Ghafari was elected mayor of Maidan Shar, Afghanistan, in March 2018. She has shown women and girls across the country that it’s possible to be a female politician in a country where few women are in leadership positions, even as she has received death threats.

Journalist Lucy Kocharyan speaks out against gender-based violence and stands up for children’s mental health in Armenia, where she has faced frequent heckling on the street and lawsuits from parliamentarians.

A defense lawyer, Shahla Humbatova has represented human rights activists, journalists, bloggers, youth activists and members of the political opposition. She is renowned for her advocacy on behalf of the LGBTI community in Azerbaijan. She currently is facing disbarment for defending individuals in politically sensitive cases who called attention to serious abuses by government actors.

Journalist Ximena Galarza hosted two interviews that exposed October 2019 election fraud in Bolivia. It was the first time a TV journalist was willing to conduct live interviews with an expert who could prove that the government rigged the elections. Her work resulted in widespread protests that eventually ousted former President Evo Morales from power.

As the founder of a grassroots campaign to educate men about female genital mutilation, Claire Ouedraogo champions women’s economic empowerment and physical safety in Burkina Faso.

An ethnic Kazakh from Xinjiang, Sayragul Sauytbay was one of the first victims to speak out against the repression of Uighurs, Kazakhs, Kyrgyz and other Muslim Central Asian ethnic groups in China.

Susanna Liew fights for members of religious minorities who have been abducted, allegedly by state agents, in Malaysia. Her husband, a Christian pastor, disappeared in 2017. Her work on behalf of these victims has brought police harassment and death threats.

Police abducted Amaya Coppens, a leader of the April 19 University Movement in Nicaragua, for peacefully protesting in September 2018 and later arrested her for bringing water to mothers of political prisoners on hunger strike. She was released in December 2019 and continues to champion democracy in her country.

Amina Khoulani survived an Assad regime torture center in Syria and has since worked to help others track down family members who have disappeared or have been detained by the regime. She was imprisoned for six months for “peaceful activism.”

Dr. Rita Nyampinga advocates for female prisoners’ rights in Zimbabwe and founded the Female Prisoners Support Trust (Femprist) in 2012 to fight for a fair and just legal system in her country. She has been charged with subversion, and she and her family have faced violent threats and public insults.