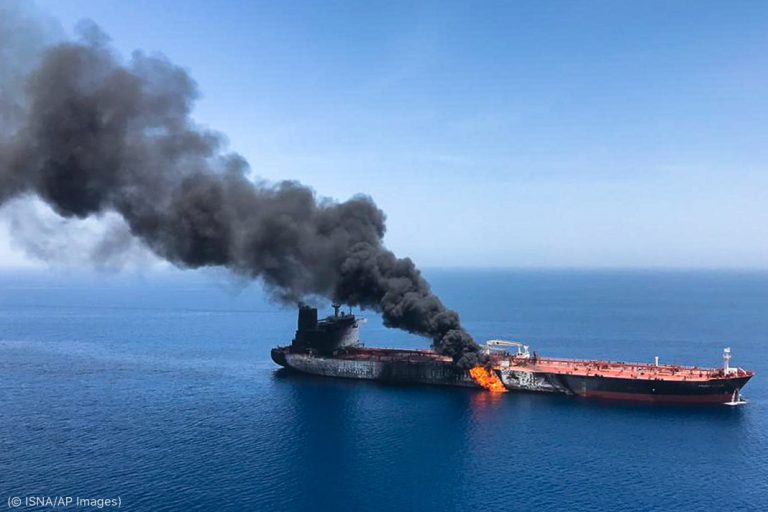 Iran’s regime has mined ships near the Strait of Hormuz, including this Norwegian-owned tanker that was attacked June 13, 2019. (© ISNA/AP Images)

U.S. Secretary of State Michael R. Pompeo is urging the United Nations Security Council to extend an arms embargo against Iran, warning that the regime poses a continuing threat to international peace and security.

Pompeo told a June 30 meeting of the U.N. Security Council that failing to extend the arms embargo against the world’s leading state sponsor of terrorism would betray the organization’s finest ideals.

“This chamber has a choice: Stand for international peace and security, as the United Nations’ founders intended, or let the arms embargo on the Islamic Republic of Iran expire,” Pompeo said. “If you fail to act, Iran will be free to purchase Russian-made fighter jets that can strike up to a 3,000 kilometer radius, putting cities like Riyadh, New Delhi, Rome and Warsaw in Iranian crosshairs.”

The U.S. has drafted a resolution to extend the embargo indefinitely. It is set to expire October 18.

The United States can “snap back” the prohibition on the Iranian regime’s arms sales, U.S. officials have said. But Pompeo said his “overwhelming preference” is to work with the council to extend the embargo.

The secretary’s call to extend the embargo comes as the United Nations has issued a new report indicating that Iran’s regime continues to ignore the U.N. conventional weapons embargo.

The report confirms that weapons used in the September 14, 2019, attacks on Saudi Arabian oil fields originated in Iran, according to a U.S. fact sheet on the report. The leaders of the United Kingdom, France and Germany joined the U.S. in blaming Iran’s regime for the attack.

The U.N. report also found that Iran’s regime defies the embargo by providing arms to proxy and terrorist organizations across the Middle East, and that caches of weapons seized off the coast of Yemen in November 2019 and February 2020 came from Iran, the fact sheet says.

Iran’s regime also launched mine attacks on commercial vessels near the Strait of Hormuz in May and June of 2019. And in January 2020, the regime conducted missile strikes on coalition forces in Iraq.

The U.S. is using economic sanctions to compel Iran’s regime to give up its pursuit of nuclear weapons and to stop funding terrorism and fomenting violence through proxy groups in the Middle East.

Pompeo told the council that if the embargo expires, Iran’s regime would upgrade its submarines to further threaten international shipping and sell more advanced weapons to fuel conflicts in Syria, Venezuela and Afghanistan.

“Iran is already violating the arms embargo, even before its expiration date,” Pompeo said. “Imagine if Iranian activity were sanctioned, authorized by this group, if the restrictions were lifted.”

Iran does not deserve to have the arms embargo lifted. pic.twitter.com/HIri6hFKbf