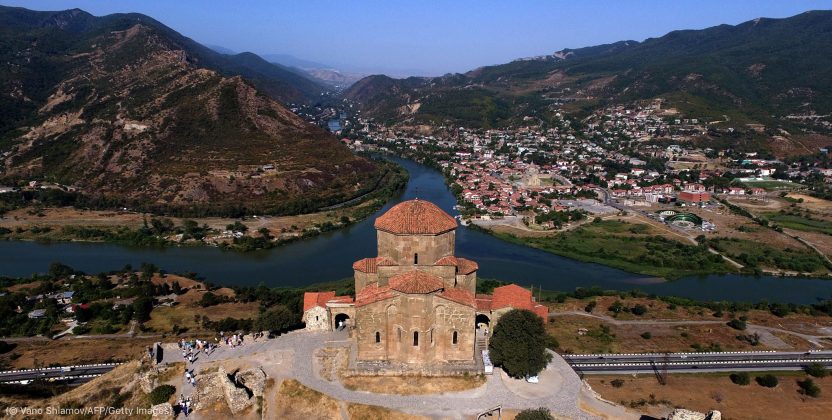 A view of the Jvari Monastery and the confluence of the Aragvi and Kura rivers near the town of Mtskheta, Georgia, in 2017 (© Vano Shlamov/AFP/Getty Images)

The United States is providing more than half a million dollars to preserve a 1,500-year-old monastery in Mtskheta, Georgia.

“Churches in Georgia play such an important role in history and culture and the society,” said U.S. Ambassador to Georgia Kelly Degnan on September 16. “The United States is very proud to be able to help Georgia preserve these iconic symbols of Georgia’s history.”

Through the Ambassadors Fund for Cultural Preservation (AFCP), the United States is providing more than $500,000 for the preservation of the major church at Jvari Monastery. This is in addition to an initial funding of $100,000 made through the AFCP in 2019 to complete the first phase of the project.

Located 20 kilometers from Tbilisi, Jvari Monastery is situated on the side of a mountain and overlooks the historic town of Mtskheta, which is also home to the headquarters of the Georgian Orthodox and Apostolic Church.

Designated a World Heritage site by UNESCO, the monastery’s location has been a site of religious significance for thousands of years. Local history says a pagan sanctuary existed on the same spot where the monastery now stands. In the fourth century, a wooden cross was erected over the pagan structure, signifying the rise of Christianity in Georgia.

Locals built a small church adjacent to the cross around the year 545 C.E., which drew pilgrims from across the region, and led to the site’s expansion. The major church was added to the site and completed in 605 C.E. These two structures are at the heart of the Jvari Monastery complex.

Soft sandstone makes up the majority of the exterior of the major church’s structure, which has been affected by water damage and wear over the years.

The preservation team will target all four facades and all eight sides of the drum of the major church, which totals around 1,200 square meters of the wall surface, the U.S. Embassy says.

“They’re looking at it very comprehensively and holistically,” said Mary Kay Judy, an architectural conservation expert involved with the project. “What they’re striving for is to conserve it, to do the minimal possible to make sure they’re getting the longest lasting result while retaining as much of the historic fabric as possible with the least amount of intervention.”

The site is still an active pilgrimage location for many across Georgia, says Judy. And while other aspects of the project have been delayed by COVID-19, the preservation is still slated to begin in December, according to the U.S. Embassy in Tbilisi.

Throughout history, Georgia had to fight to preserve its culture and heritage from outsiders whether from Arabs, Mongols, or the Soviets. At Jvari, the United States is working with the Georgians to preserve this iconic site and to recognize and protect Georgian culture. “It’s a strong symbol of our strategic partnership and the different nature of our relationship,” said acting Public Affairs Officer Christopher J. Anderson.