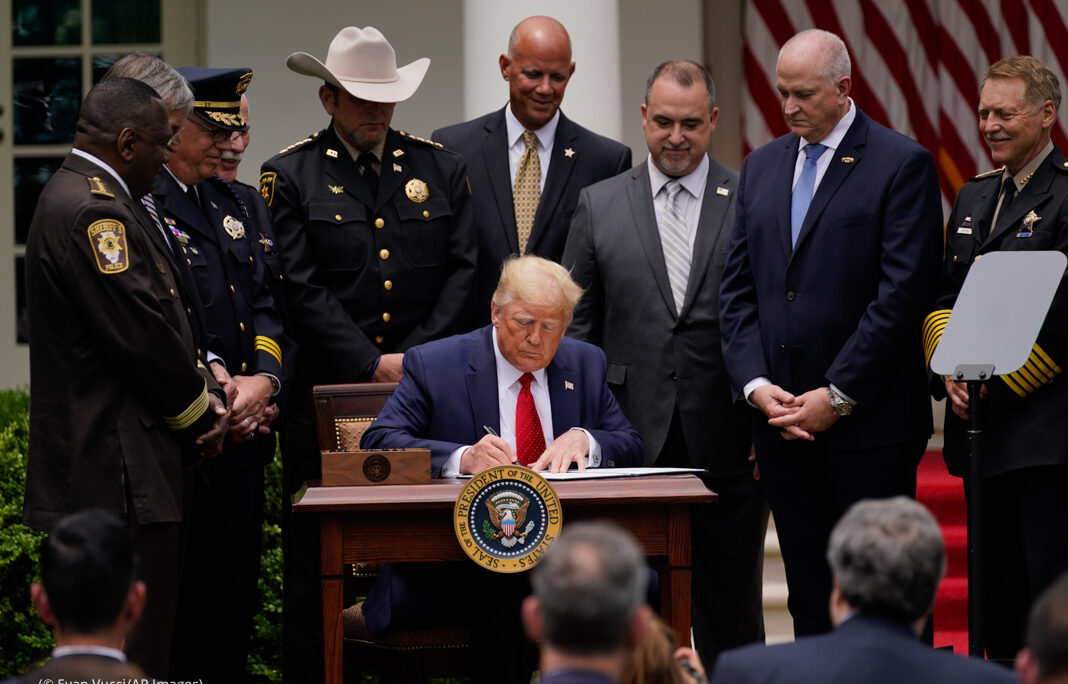 The Executive Order on Safe Policing for Safe Communities mandates that
police departments will receive accredited training on de-escalation, use of force and
community engagement. Additionally, a database will track police officers within the U.S. who have received complaints of excessive force. It also calls for increased training and resources, including increased partnerships with social workers when responding to individuals suffering from mental health issues, homelessness or addiction.

Raising standards of policing and reducing crime are not mutually exclusive, Trump said at a June 16 signing ceremony.

“Americans believe we must support the brave men and women in blue who police our streets and keep us safe,” the president said. “Americans also believe we must improve accountability, increase transparency, and invest more resources in police training, recruiting and community engagement.”

The order also effectively bans officers from restraining suspects by the neck, except in
situations where deadly force is allowed by law.

Trump’s action responds to the killing of George Floyd on May 25 while in the custody of Minneapolis police, and it adds to efforts also underway by state and local officials. Local reforms include increasing disclosure of police misconduct and body camera footage.

Other reforms passed at the local level seek to increase police accountability and limit instances of excessive force.

For example, officials in Minneapolis and Dallas have issued new requirements that officers intervene to stop fellow officers from using excessive force, according to news reports. Minneapolis will require officers to report their colleagues’ misconduct, while authorities in Denver are requiring police to report to a supervisor if they point their weapon at a citizen.

The Louisville, Kentucky, Metro Council passed an ordinance June 11 banning police from serving warrants and entering homes without knocking. That measure comes after a woman was killed in March when police served a no-knock warrant on her apartment and exchanged gunfire with her boyfriend, who has said he suspected the police were robbers.