Home Home | News & Events | President Trump to the U.N.: ‘We will defeat the virus’ 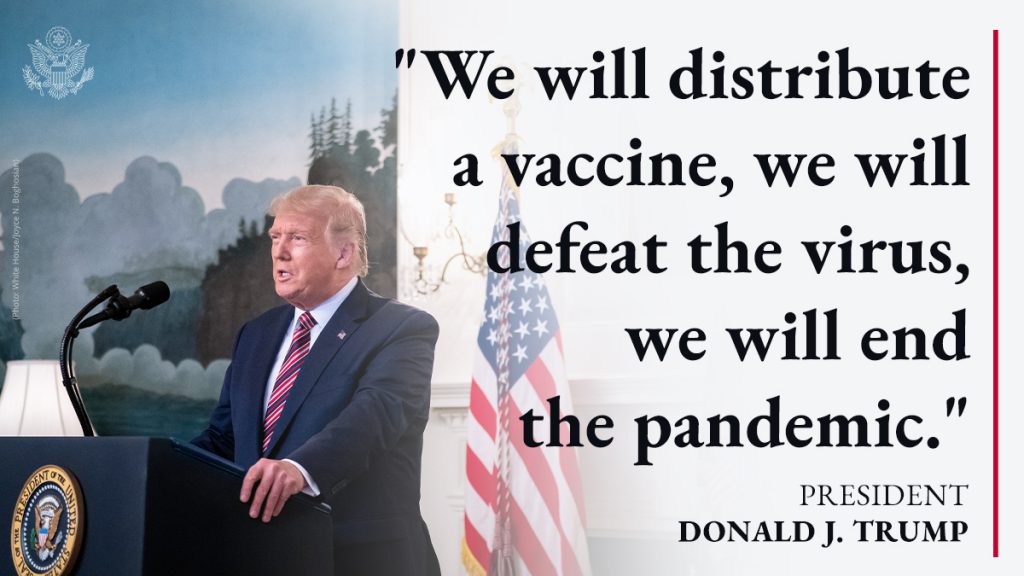 President Trump vows to defeat COVID-19 and urges the United Nations to hold the People’s Republic of China accountable for its role in the early spread of the virus, leading to a global pandemic.

In remarks to the United Nations General Assembly on September 22, Trump said that three potential COVID-19 vaccines supported by the United States are in the final stages of testing and that the United States is manufacturing doses in advance.

“We will distribute a vaccine, we will defeat the virus, we will end the pandemic, and we will enter a new era of unprecedented prosperity, cooperation and peace,” he said.

The U.S. has allocated $20.5 billion for the development of vaccines and therapeutics, preparedness efforts and other foreign assistance, including distributing lifesaving ventilators to countries around the world.

The president also highlighted China’s failures in its response to the outbreak, noting that China’s leaders locked down travel within the country’s own borders while “allowing flights to leave China and infect the world” and criticizing U.S. entry restrictions on those who had been in China.

“[W]e must hold accountable the nation which unleashed this plague onto the world: China,” Trump said.

Trump faulted the World Health Organization for parroting the Chinese Communist Party’s claims in January that there was no evidence of the virus spreading from person to person.

And he pressed world leaders to address a broad range of PRC misconduct, including polluting waterways with millions of tons of plastics, overfishing other nations’ waters and emitting more mercury into the atmosphere than any other country in the world.

He encouraged the United Nations to address challenges, including forced labor and religious persecution. The Chinese Communist Party has interned more than 1 million Uyghurs and members of other ethnic minorities in its western region of Xinjiang, and pursued campaigns of forced sterilization and forced labor against religious minorities in the region, reports say.

He cited recent successes, including U.S. partnerships with Guatemala, El Salvador, Honduras and Mexico to stop human smuggling, and continued support for the people of Venezuela in their quest for democracy.

New accords that the United Arab Emirates and Bahrain have reached to normalize ties with Israel can serve as models for future Middle East peace deals, he said.

Trump brokered the normalization deals and told the U.N. General Assembly that he anticipates similar agreements in the near future.

“I have never been more optimistic for the future of the region,” Trump said. “There is no blood in the sand. Those days are, hopefully, over.”