By  Mark Trainer
Americans honor their presidents in many ways, but few presidential monuments are as big as Mount Rushmore in the Black Hills of South Dakota (see above). The monument depicts four presidents for their roles in the country’s history: (from left) George Washington for the country’s birth, Thomas Jefferson for helping the young republic grow, Theodore Roosevelt for developing the country, and Abraham Lincoln for his preservation of the union. Every February, Americans remember their presidents. The holiday first started in 1885 to mark the February 22 birthday of George Washington, the first president. Today, the holiday is celebrated on the third Monday of February and honors all presidents. Here are some of the most popular — and a few less familiar — memorials to U.S. presidents.

The Washington Monument is among the world’s most recognized memorials to a political leader. Its obelisk shape derives from the Egyptian symbol for stability and creative force. Its construction, begun in 1848, stalled between 1856 and 1876 because of lack of funds and the turmoil of the Civil War. The 169-meter monument is the tallest stone structure in the world.

The magnificent monument to President James Garfield in Lake View Cemetery in Cleveland includes stained glass windows and murals depicting scenes from the life of the president. A tower balcony affords views of Cleveland and Lake Erie. Garfield was assassinated in 1881 after only 200 days as president.

A sylvan memorial to the president known as an outdoorsman and a conservationist, Theodore Roosevelt Island sits in the Potomac River in Washington and contains miles of trails for visitors to hike. At its center is a memorial plaza with a 5-meter statue of the 26th president, who served from 1901 to 1909.

Another Roosevelt, Theodore’s fifth cousin Franklin, was elected president in 1932. Franklin Delano Roosevelt led the U.S. through most of the Great Depression and World War II. He was wheelchair-bound for his entire presidency, after contracting polio at the age of 39. His memorial in Washington is the first presidential monument designed to be wheelchair-accessible. The video above — which gives a 360-degree view of the FDR Memorial — also highlights other features for people with disabilities. 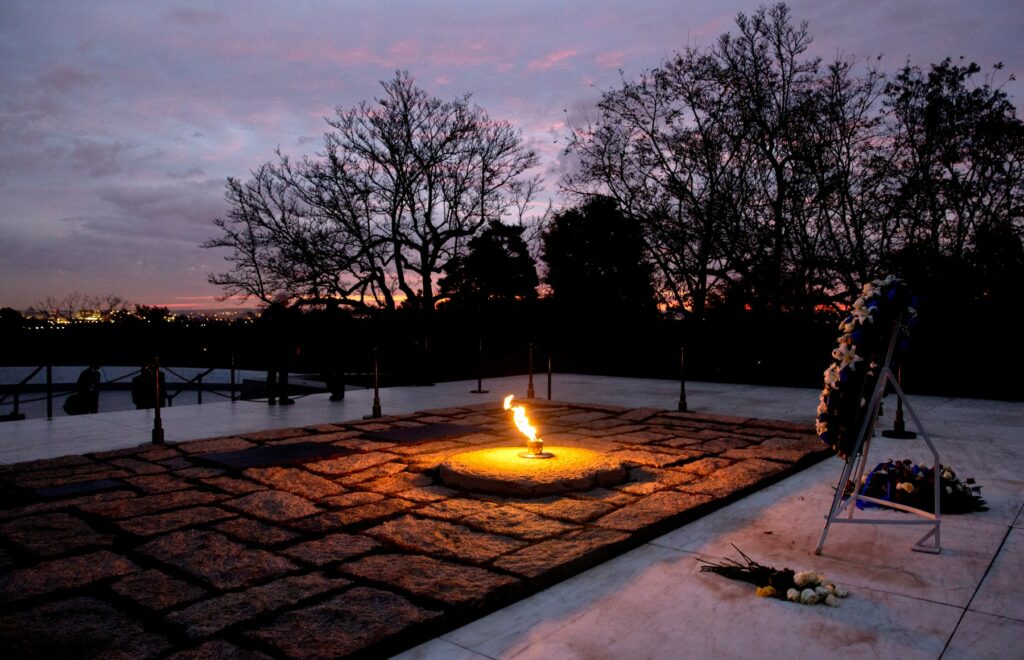 An eternal flame serves as a memorial at the grave of John F. Kennedy in Arlington National Cemetery, where men and women who have served in the U.S. Armed Forces are buried. The president had visited this particular hillside with a friend just months before his assassination in November 1963 and had admired its peaceful atmosphere. The eternal flame was a request of Kennedy’s widow, Jacqueline Kennedy, who chose the publicly accessible location, saying, “He belongs to the people.”

This article was originally published on February 12, 2018.