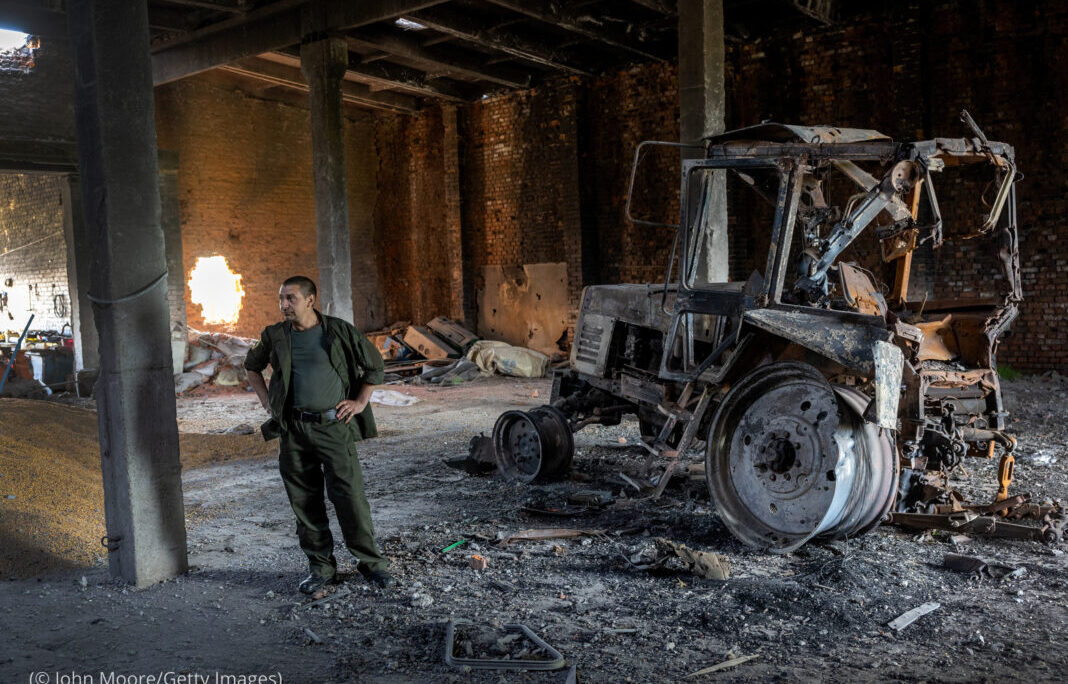 A Ukrainian farm worker in Cherkaska Lozova stands near a tractor that he said Russian shelling had destroyed in May 2022. He said Russian forces also destroyed a grain warehouse and farm equipment while occupying territory outside of Kharkiv. (© John Moore/Getty Images)

Ukrainian farmers like Anatolii Kulibaba of Bilka struggle with tragedy following Russia’s full-scale invasion. A Russian military bombing killed his 45-year-old son and Russian troops occupied his farm, leaving much of it in ruins. “My fields were destroyed by the shelling,” Kulibaba told NPR.

Using imagery from NASA, Maxar estimates that, compared to 2021 figures:

The invasion, which started February 24, not only destroyed many Ukrainian fields but also disrupted spring crop planting and shipping of existing grain inventories, said Maxar, a space technology company headquartered in Westminster, Colorado.

Thirty percent of Ukraine’s agricultural land is either occupied by Russian military forces or unsafe, according to the nation’s ministry of agriculture.

Some areas are hit harder. In Zaporizhzhia, an oblast (province) located in southeast Ukraine, Russian troops occupy 85% of the oblast’s farmland, the Voice of America reported.

In the village of Shestakove, 30 kilometers northeast of Kharkiv, satellite imagery acquired in April suggests “a deliberate attack on a major agricultural production facility” called the Agromol dairy farm, according to the Center for Strategic and International Studies (CSIS).

CSIS estimates that Russian shelling severely damaged six of 20 livestock sheds at the Agromol dairy farm. The farm is one of the region’s largest dairy producers.

Maxar said its satellite imagery, seen below, also shows how the Putin government continues to take grain from Ukraine and transport it to other regions of the world.

On the left, satellite imagery shows a Russian-flagged bulk carrier ship docked in the Russian-controlled Crimean port of Sevastopol being loaded with grain. Days later, Maxar said its satellites collected images of the same ship docked in Syria, with its hatches open and semitrucks lined up ready to haul the grain away (depicted in the image on the right).

An estimated 400 million people worldwide rely on Ukraine for their food supply, according to the United Nations World Food Programme (WFP). It said the war raises food and energy prices and contributes to economic and food instability in several regions of the world.

“The bullets and bombs in Ukraine could take the global hunger crisis to levels beyond anything we’ve seen before,” WFP Executive Director David Beasley said in March.

The United States government is acting on several fronts to address global food insecurity. This includes: