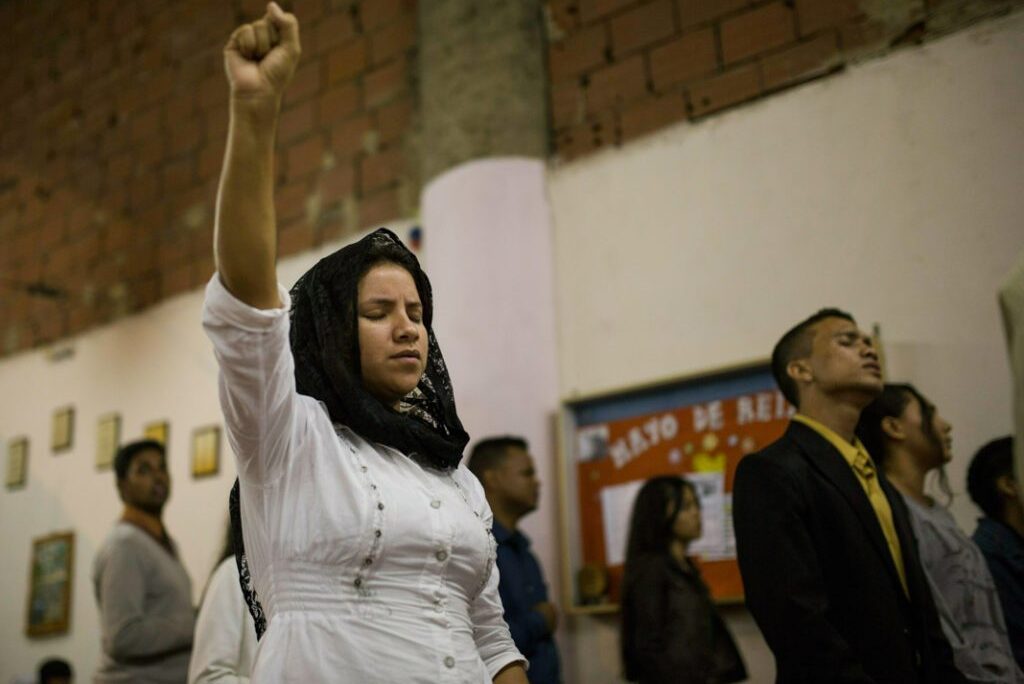 A woman prays during a religious event organized by the Santidad de Jehovah evangelical church inside a squatter building in Caracas, Venezuela, on May 10, 2019. (© Rodrigo Abd/AP Images)

Freedom of religion is under attack in Cuba, Nicaragua and Venezuela, due to authoritarian regimes determined to control expressions of faith.

Dictators in the countries, or their proxies, have burned churches and harassed or teargassed worshipers, U.S. Agency for International Development Acting Administrator John Barsa told an August 20 discussion on religious freedom in the three countries.

“These attacks on religion are pure violations of human rights, plain and simple,” Barsa told participants who joined the online event hosted by Outreach Aid to the Americas, a Miami-based group that provides assistance in South America and the Caribbean. “Every man or woman should be able to practice their God-given right to freedom of conscience.”

The Cuban government tracks, attacks and harasses religious leaders, imprisoning those who openly practice their faith, Barsa said. The regime frequently restricts construction of houses of worship and forbids services in religious buildings that are not officially registered with the government.

In May, the United Nations expressed concern to the Cuban regime about its ongoing harassment of Pastor Alain Toledano Valiente and his congregation, including the destruction of their church building, acts of intimidation, travel bans, arbitrary arrests, interrogations and forced evictions.

Cuba dismissed the accusations as “political manipulation,” and called the religious group “mercenaries” trying to undermine the regime, according to its July 23 response to the U.N.

While Cuba’s Constitution prohibits religious discrimination, the Cuban Communist Party controls most aspects of religious life, requiring religious groups to register with the Ministry of Justice, according to the U.S. State Department’s 2019 Report on International Religious Freedom.

Thank you @OutreachAid for today's discussion about religious freedom and defeating tyranny. We’re here to speak truth to power, celebrate faith as a connector of people & an engine for change, and to call out these regimes for their crimes. Follow this thread to learn more! pic.twitter.com/VpcjpBSQZb

While Nicaragua’s National Police has deemed the cathedral fire accidental, religious leaders reject that cause, calling the fire a “savage and terrorist” act, according to the Associated Press.

“These are not isolated incidents, not accidents,” Barsa said of the recent church fires in Nicaragua. “These are targeted terrorist attacks by Ortega-supported thugs.”

Regimes in Nicaragua and Venezuela have retaliated against clergy for criticizing the government, according to the State Department’s 2019 Report on International Religious Freedom. Catholic and Protestant leaders perceived as critical of the Ortega regime have faced harassment, death threats and assaults, the report says, citing religious leaders.

On May 1, 2019, in Venezuela, Nicolás Maduro’s National Guard teargassed worshipers at Our Lady of Fatima Church, sending families with children and the elderly fleeing through a back door, Barsa said.

Both Barsa and Tekach said the only way to combat faith-based violence and oppression in these three countries — and in others around the world — is to continue calling attention to authoritarian regimes’ brutality and targeted campaigns against the faithful.

“We will work together to raise the world’s awareness,” Tekach said. “We must defend against those who distort faith to support authoritarian rule.”