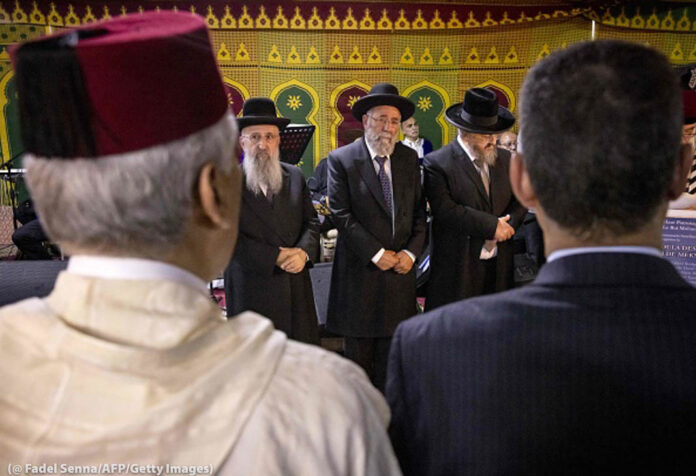 Jewish community members gather in Meknes, Morocco, in May. Jewish heritage sites are being renovated under an initiative of the Kingdom of Morocco. (© Fadel Senna/AFP/Getty Images)

“When the fundamental right of each person to practice their faith or to choose not to observe a faith is respected, people can make their fullest contributions to their community’s successes; entire societies are better off,” Blinken said.

But when governments deny this right, “it ignites tension, it sows division, it often leads to instability and conflict,” he added.

“RELIGIOUS FREEDOM IS THE FIRST FREEDOM ENSHRINED IN OUR CONSTITUTION’S BILL OF RIGHTS.”

“Ultimately, this report is about spreading that kind of progress to more parts of the world,” Blinken said.

Some governments continue to use blasphemy and apostasy laws to discriminate against religious minorities. Others curtail expressions of religious belief, like restrictions on religious attire.

In his remarks, Blinken highlighted examples of threats to religious freedom, including:

“All societies, including our own and across Europe, must do more to combat rising forms of hate, including anti-Semitism and anti-Muslim sentiment,” Blinken said.

Rashad Hussain, the U.S. ambassador-at-large for international religious freedom, said no community is immune from abuses.

“Governments must speak out and protect the vulnerable and marginalized,” he said. “Religion can be such a powerful force for good, and it should never be used to harm people.”