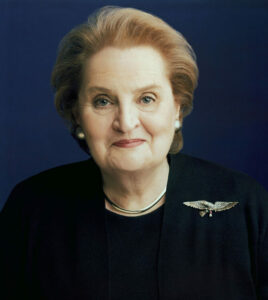 THE PRESIDENT:  Freedom endures against all odds in the face of every aggressor because there are always those who will fight for that freedom.

And in the 20th and 21st century, freedom had no greater champion than Madeleine Korbel Albright.

Anne, Alice, Katie — your mom was a force — a force of nature.  With her goodness and grace, her humanity, and her intellect, she turned the tide of history.

David, Daniel, Jack, Jake, Ben, and Ellie — you’re too young to remember this, but when the Iron Curtain fell and the Berlin Wall came down, our world faced one of those inflection points — a once-in-a-generation moment of upheaval but opportunity as well.

People and nations around the world were deciding the future they wanted to make for themselves.  And your grandmother — your grandmother — as Madam Ambassador and as the first female Secretary of State in American history, made sure those nations and those people knew exactly where the United States of America stood — and what we stood for.

You know, and all through it, her beloved sister Kathy and her brother John can attest, she never forgot where she came from or who she was.

President Obama, President and Secretary Clinton, Vice President Al Gore, members of Congress, Cabinet members past and present: Today, we honor a truly proud American who made all of us prouder to be Americans.

I also want to welcome the distinguished guests and dignitaries who have traveled from around the world to celebrate a daughter of the Czech Republic who knew — who knew what it meant to endure war and flee persecution.

With her friend Vaclav Havel — when he died, I remember, when Madeleine eulogized him, she used these words, and I quote, “He cast light into places of deepest darkness and reminded us constantly of our obligations to one another.”

These words — these words apply equally to Madeleine.

When I got word that Madeleine had passed, I was in mid-air on my way to Europe to meet with our NATO Allies in Brussels to help try to continue to keep the — the strong, strong alliances together — our organization and international response to Russia’s brutal and unjustifiable war against Ukraine.

And it was not lost on me that Madeleine was a big part of the reason NATO was still strong and galvanized, as it is today.

And a few days later, I traveled to Poland and spoke about all that is at stake in our world and for democracy and freedom — which is under assault from forces of autocracy and oppression.

Many are tired of hearing me say I think we’re at another inflection point in world history, where there is literally a severe contra- — confrontation between autocrats and democratic nations.

President Clinton — Bill, it was not lost on me that you spoke at the same Warsaw Castle that I was about to speak at 25 years earlier.

In my case, it was evening.  The interior of the castle — a beautiful courtyard — holds about 5-, 600 people.  And mostly Poles and Ukrainians were present when I spoke.  And I’m sure many in the audience spoke English, though likely not their first language.

Madeleine never minced words or wasted time when she saw something that needed fixing or someone who needed helping.  She just got to work.

And as a member of the Senate Foreign Relations Committee from the time I was a kid — God, they were the good old days.  (Laughter.)  I — I was the chairman or the ranking member for a good part of that time.  And in the ‘90s, I can attest that Madeleine, with the significant help of the President of the United States, kept the committee really busy.

In our work to halt genocide in the Balkans, support new democracies in Eastern and Central Europe, to develop Plan Colombia — in all of those undertakings, Madeleine was an incomparable ally and advisor beyond the President to me and to others on the committee.

She always had a knack for explaining to the American people why it mattered to them that people everywhere in the world were struggling to breathe free.

And Madeleine didn’t stop when she left government.  For decades, she was a nexus of the foreign policy community, always — and I mean always — on top of the latest developments, always speaking out for democracy, and always the first to sound the alarm about fascism.

Presidents and leaders around the world continued to solicit her advice, including me.  When I asked her last year to chair the Defense Policy Board, she built businesses.  She pumped out New York Times bestsellers that were both highly prescient and deeply salient — and constantly bestsellers.  I think I’ve read them all.

You know — and the thing that I noted that was deliberate and remarkable about her — not unlike Secretary Clinton — was that she made sure that young women knew they belonged at every single table having to do with national security, without exception.

Today, across our government and around the world, Madeleine’s protégés are legion.  Many are here today, each carrying within them a spark lit by her passion and her brilliance.

I think part of the reason why Madeleine was such a successful diplomat was that she understood something I’ve always believed.  And my boss, President Obama, when I was Vice President, used to kid me because I’d repeat so often, because I believed she understood something I’ve always believed: that all politics, especially international politics, is personal.  It all, ultimately, is personal.

She could go toe to toe with the toughest dictators, then turn around and literally teach a fellow ambassador how to do the macarena on the floor of the U.N. Security Council.  (Laughter.)  You all think I’m kidding.  I’m not kidding.

She thought it was too difficult to teach me how to dance, though.  (Laughter.)  She was right.

No matter where she was, she understood people.  She cared about people.  And all of that was grounded in an education gained by watching her father, Josef Korbel — and her mentor as well.

She learned diplomacy at the dinner table.  And throughout her life, nothing mattered to Madeleine more than the family — nothing.

Madeleine had the same rule that I do and others here do: No matter what’s happening in my day — as President Obama can tell you — or who I’m meeting with, if one of my children calls, I take the call.  She was the same way.

She loved to speak about America as the “indispensable nation.”  To her, the phrase was never a statement of arrogance.  It was about gratitude for all this country made possible for her.  It was a testament to her belief in the endless possibilities that only America could help unlock around the world and to her understanding of what American power could achieve when it was united with and motivated by enduring American values.

That’s why there was nothing she loved more than swearing in new citizens to this great nation of ours.  She’d light up, reminding them that she had once stood where they stood.

Having gained the blessings of liberty, she wanted nothing more than to share them around the globe.

To Madeleine, from my prospective, there was no higher mission, no greater honor than to serve this great experiment in freedom known as the United States of America.

May her memory continue to be a blessing to our nation, and may we remember her words and her deeds.

May she always be a light to all those in the darkest places — a reminder of our obligation to one another.