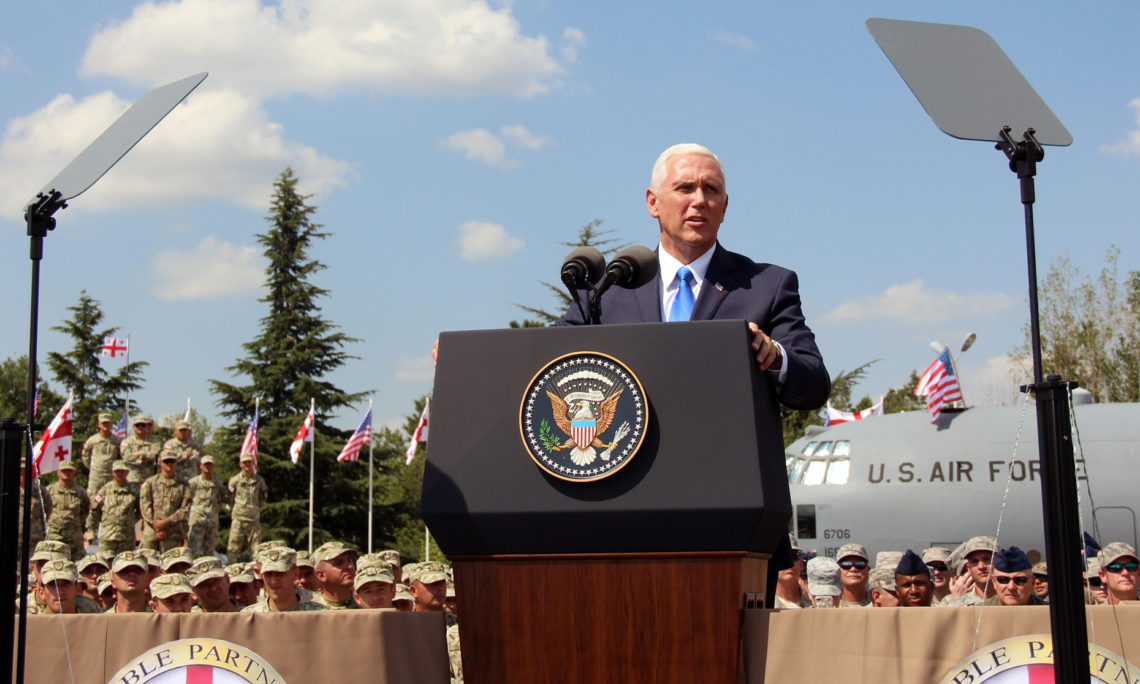 Remarks by the Vice President to Noble Partner Participants (August 1)

THE VICE PRESIDENT:  President Margvelashvili, Prime Minister Kvrikashvili, Minister Izoria, General Chachibaya, members of the armed forces of the United States of America and Georgia, to all our distinguished guests, it is an honor to join you here today to address the men and women of Exercise Noble Partner.  (Applause.)

And to all of you, I bring greetings from the leader of the free world, the President of the United States of America — President Donald Trump.  (Applause.)

The President sent me here to this place, at this time simply to thank all — thank you for stepping up to serve your nations, for standing in the gap on this great frontier — united in the defense of freedom.

You are the best of us — heroes all.

And you are here, the Americans among you so far away from home, because the United States and Georgia are bound together by the abiding oath of friendship and by our shared commitment to the cause of freedom.

Under President Trump, the policy of the United States is to place the security and the prosperity of America first.  But as the President has made clear, and as our presence here today demonstrates, America First does not mean America alone.

We are here today, with the steadfast assurance of the United States of America to tell our friends in Georgia:  We are with you.  (Applause.)

We stand with the nation and the people of Georgia, and we will stand with you as you pursue membership in the North Atlantic Treaty Organization.  And the United States of America stands with Georgia in defense of what President Trump in Warsaw called “the priceless ties that bind us together as nations, as allies, and as a civilization.”  And those ties are freedom, democracy, and the rule of law.

The roots of the nation and people of Georgia stretch back into the mists of history.  Sitting here at the crossroads of empires and civilizations — where East meets West, where North meets South — Georgia has fostered a vibrant culture and a rich heritage of faith.

And through all the millennia, none have been able to deprive you of your identity.  The people and culture of Georgia have stood the test of time.  (Applause.)

It was only a generation ago that Georgia was still imprisoned inside the Soviet Union.  That Communist regime personified everything that free peoples reject, and it sought to crush you in its heartless, inhuman embrace.  The Soviet Union sought to eradicate your history — even the very essence of who you are, the cherished ties of culture and faith.

This year marks the 25th anniversary of the establishment of the diplomatic relations between the United States and Georgia, and we marvel at your progress — the progress you’ve made since you regained your independence.  Georgia’s future is in the West.

For many years, Georgia has been a key strategic partner of the United States.  Since 2004, thousands of brave Georgians have served with their American brothers-and-sisters-in-arms in Kosovo, in Iraq, and in Afghanistan.

In Afghanistan alone, Georgia has provided more troops on a per-capita basis than any other country in the world.  (Applause.)

The strategic partnership between the United States and Georgia is stronger now than ever before, and this joint exercise is a tangible sign of our commitment to each other to make it stronger still.

Exercise Noble Partner brings together the Armed Forces of the United States, of Georgia, and many other nations to train together and execute complex operations.

Noble Partner will strengthen Georgia’s ability to defend itself in the years ahead.  It will prepare Georgian soldiers to join NATO’s Response Force in the future.

This exercise is a testament to your professionalism, to the high value that the United States and our NATO allies place on Georgia’s security.  But our commitment to your security doesn’t stop there.

American advisors will continue to work alongside your leaders to improve Georgia’s military readiness.  And along with all our NATO allies, the United States is contributing to the Substantial Package for Georgia, to strengthen Georgia’s resilience, and to bring Georgia ever closer to your goal of membership in NATO.  (Applause.)

And to be clear, President Trump and the United States stand firmly behind the 2008 NATO Bucharest statement, which made it clear that Georgia will someday become a member of the most successful military alliance in the history of the world.  (Applause.)

Georgia has already taken important steps toward this goal — especially in terms of security.  Georgia has long exceeded NATO’s own goal of spending 2 percent of gross domestic product on defense.  Your commitment is a model for many current NATO members, many of which have not fulfilled their obligations to our common defense.  And so I want to congratulate and thank Georgia for your strong commitment and your strong example of national leadership on national defense.  (Applause.)

And to those here in the uniform of the United States, be assured your Commander-in-Chief is busy making the strongest fighting force in the history of the world stronger still.

As President Trump said just a few days ago, in his words, “American might is second to none — and we’re getting bigger, and better, and stronger every day.”

The President has already signed the largest increase in military spending in nearly 10 years.  And we’re calling on Congress to pass one of the largest investments in defense since the days of the Cold War.

Our investments in our defense, like Georgia’s, are borne of necessity.  The rise of adversaries new and old requires renewed strength and renewed resolve by all who cherish freedom.

We stand here today in the gap, on a frontline of freedom, a frontline compromised by Russian aggression nearly a decade ago.  At this very moment, just 40 miles from where we stand, Russian tanks sit on Georgian land in South Ossetia.  Today, Russia continues to occupy one-fifth of Georgian territory.

Be assured:  The United States will continue to support Georgia’s sovereignty and territorial integrity within its internationally recognized borders.

The United States of America, under President Donald Trump, will reject any claim, at any time, by any nation that undermines this enduring principle.

To that end, President Trump has called on Russia recently, here and elsewhere, to “cease its destabilizing activities,” and we will continue to work with Georgia to reduce your vulnerabilities and counter potential Russian aggression.

And in a further sign of our commitment, very soon, President Trump will sign legislation to strengthen and codify the United States’ sanctions against Russia.

The United States prefers a constructive relationship with Russia based on mutual cooperation and common interests.  But the President and our Congress are unified in our message to Russia — a better relationship, the lifting of sanctions will require Russia to reverse the actions that caused the sanctions to be imposed in the first place.  And not before.  (Applause.)

We hope for better days, for better relations with Russia, but the recent diplomatic action taken by Moscow I can assure you will not deter this President or the commitment of the United States to our security, that of our allies, and freedom-loving nations around the world like the freedom-loving people of Georgia.
The United States has stood with Georgia since your independence, and under President Trump, we will continue to stand shoulder-to-shoulder and work hand-in-hand with you to fortify your defense, to strengthen your democracy, and to deepen your ties of friendship with Europe and the United States.

We stand with you because we know the wisdom of that ancient Georgian saying there is — “strength is in unity.”  (Applause.)

Earlier today, my wife and I visited the Patriarch of the Georgian Orthodox Church at the Sioni Cathedral; that soaring temple, whose foundations stretch back more than 1,500 years, is deeply inspiring.  It’s a symbol of the ancient faith that fills this land.

As I walked beneath its painted dome, I could not help but think of an ancient truth from the sacred scriptures, one which we’d do well to reflect on in these challenging times.  As we train, as we prepare, as we promote commerce and mutual prosperity, we do well to remember those words:  “Where the spirit of the Lord is, there is liberty.”

Today, we recommit ourselves to the cause of security, prosperity, and liberty for the people of Georgia.  We renew our pledge to stand together in unity as partners and as friends, and to one day stand together as allies in the North Atlantic Treaty Organization.  (Applause.)

And we do so with confidence and with faith — faith in the courage of all of you who wear the uniform, faith and confidence in the strength and resilience of the proud people of this ancient land, confident in the leadership of our Commander-in-Chief, President Donald Trump, and your leadership in Georgia, and with faith in the blessings and protection of God above, I know the United States and Georgia will embrace a future of freedom in unity together.