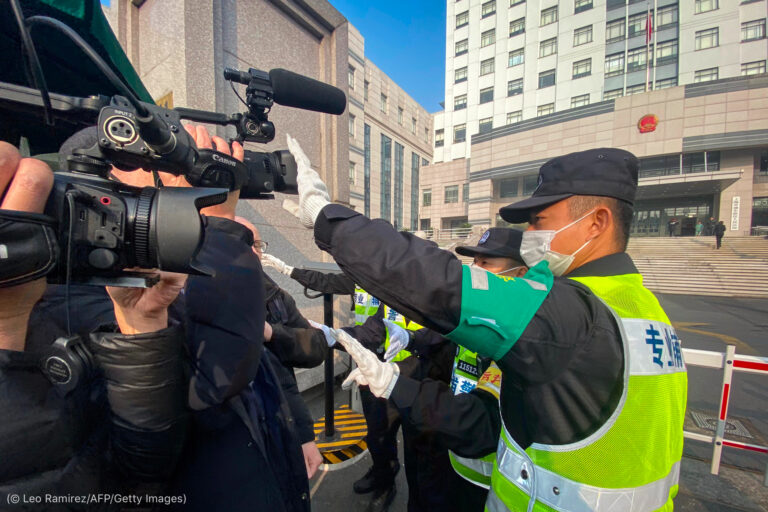 Police officers stop journalists from filming outside a Shanghai court where Zhang Zhan was on trial after reporting on the COVID-19 outbreak in Wuhan, China. (© Leo Ramirez/AFP/Getty Images)

After criticizing the Venezuelan government’s response to COVID-19 in April, human rights lawyer Iván Virgüez was arrested and tortured by the illegitimate regime of Nicolás Maduro.

Chinese reporter Zhang Zhan traveled to Wuhan, China, in February 2020 to report on the city’s coronavirus outbreak and was later sentenced to four years in prison. The journalist’s crime: “provoking trouble.”

“I’m just documenting the truth,” Zhan said at a December hearing. “Why can’t I show the truth?”

Human Rights Watch in a report issued February 11 says regimes in Venezuela and the People’s Republic of China are among more than 30 governments that used the COVID-19 pandemic to justify threatening or punishing critics.

The report, “Covid-19 Triggers Wave of Free Speech Abuse,” says authoritarian governments have prosecuted critics, shuttered media outlets, and enacted vaguely worded laws to criminalize speech — all under the guise of protecting the public from COVID-19.

The United States protects free speech as an essential part of democracy. The right to speak freely without government-imposed suppression or restriction is enshrined in the First Amendment to the U.S. Constitution, along with the freedoms of religion, press and assembly, and the right to petition the government for redress of grievances. Those five freedoms empower citizens to fully participate in society, self-govern, hold elected officials accountable and protest peacefully.

The HRW report says governments in countries including China, Cuba, Egypt, Russia and Venezuela have used the COVID-19 pandemic to justify restrictions on speech that affect large numbers of people.

At least 52 nations have passed laws or regulations that criminalize COVID-19 reporting deemed undesirable. Authorities in 18 countries have physically assaulted journalists or bloggers who reported on COVID-19, the report says. Eight nations have dismissed medical staff for discussing the official response to the crisis.

Egyptian authorities arrested physician Ibrahim Bediwy in May after he warned that doctors who criticize the government’s COVID-19 response face risks, the report says. He was charged with terrorism and detained until January.

“Governments should counter COVID-19 by encouraging people to mask up, not shut up,” Gerry Simpson, HRW’s associate crisis and conflict director, said in the report. “Beating, detaining, prosecuting, and censoring peaceful critics violates many fundamental rights, including free speech, while doing nothing to stop the pandemic.”