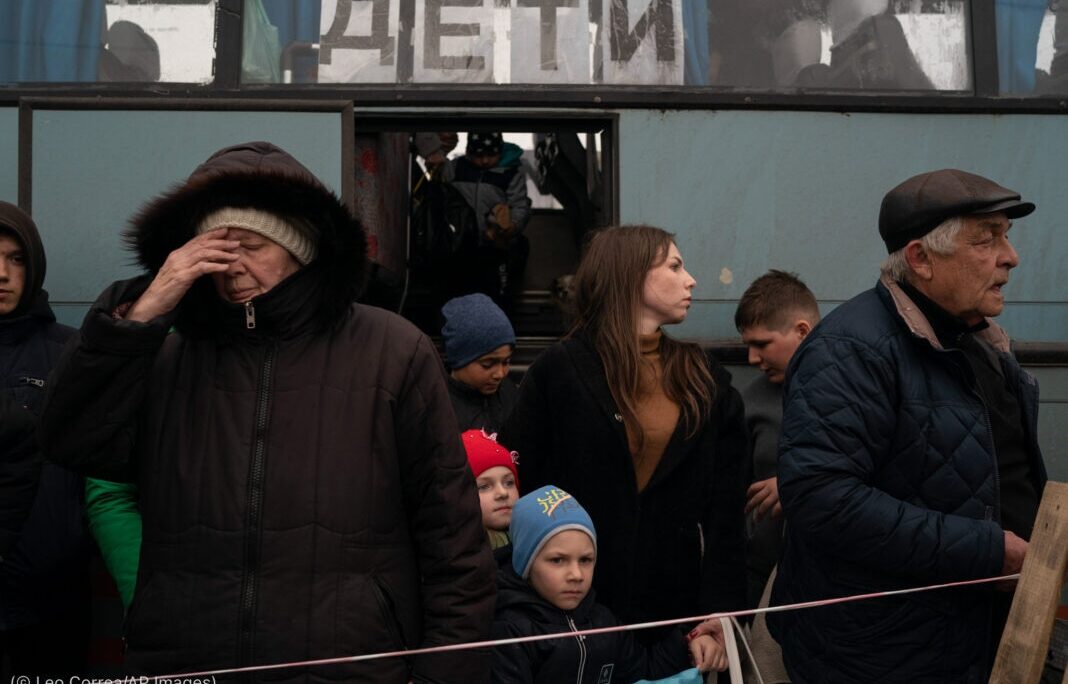 People traveling from Mariupol to Zaporizhzhia, Ukraine, must pass through filtration checkpoints. (© Leo Correa/AP Images)
By Noelani Kirschner
The Russian government is potentially engaging in torture and forced labor at filtration areas in eastern Ukraine, according to a new report from Yale’s Humanitarian Research Lab. Satellite imagery also indicates the potential presence of graves at one facility.

The report used open-source data cross-referenced against recent high-resolution satellite imagery. Only sites whose location and activities had been corroborated by five independent sources were included.

“President Putin and his government will not be able to engage in these persistent abuses with impunity. Accountability is imperative, and the United States and our partners will not be silent,” the State Department said in an August 25 statement.

What are filtration facilities?

According to the report, filtration facilities include:

Civilians trying to leave Russia-controlled areas of Ukraine to reach Ukraine-held areas are forced to pass through filtration centers, which are strategically positioned along main roads, rivers and other arteries in Russia-controlled regions. “All people fleeing the three oblasts [administrative regions] who do not wish to go to Russia must pass through this [Vasylivka] checkpoint,” says the report.

Civilians are also rounded up and forcibly taken to filtration facilities.

As of June 14, Ukraine’s former Ombudswoman Lyudmila Denisova said at least 1.7 million Ukrainian civilians, including 276,000 children, were sent to Russia through the filtration sites. Russian officials report the numbers are twice that — closer to 3.4 million people, including over half a million children.

In 2000, Human Rights Watch reported of the Chechen facilities, “Many ‘disappear’ for months as Russian officials keep them in incommunicado detention. Some are eventually released when relatives pay a bribe. Others never come back.”

The Yale report details 21 verified filtration sites in and around Donetsk oblast, some for processing, some for holding or interrogation, and some for detention. The Russian government took over Ukrainian schools, markets, administration buildings, and prisons for the filtration sites immediately after the full-scale invasion of Ukraine six months ago.

Conditions at the registration points are overcrowded and unsanitary, according to witnesses quoted in the report.Ukrainian civilians say they’ve been forced to wait several days without food, water or access to bathrooms. Several have died while waiting.

The prison facilities are worse. “In detention facilities, civilians are often held alongside prisoners of war and there is strong evidence of inhumane conditions and treatment, as well as … torture,” according to the report.

Prisons meant for 100 people are instead holding 800 Ukrainians. People have only enough room to kneel and can’t use the bathroom for days.

Russia’s filtration operations in Ukraine are devastating the lives of hundreds of thousands of civilians. A new Conflict Observatory report shines a light on these and other atrocities. We will continue to work to hold Russian officials accountable. https://t.co/DFnp94mXMQ

Civilians, mostly men, are subjected to forced strip-searches. Eyewitness accounts cited in the report say if tattoos, clothing, or even social media posts on detainees’ personal phones indicate allegiance to Ukraine, they are beaten.

Others who escape the holding and detention facilities describe:

The report says treatment is worse for captured Ukrainian soldiers. A man who escaped a prison in April described how “new captured servicemen were brought to the colony. [Russian soldiers] started to beat them. The guards turned on the radio for the entire prison and at that moment these prisoners were beaten,” he said.

“The people of Ukraine deserve justice, and the United States will continue to stand united with them for as long as it takes,” the State Department said.