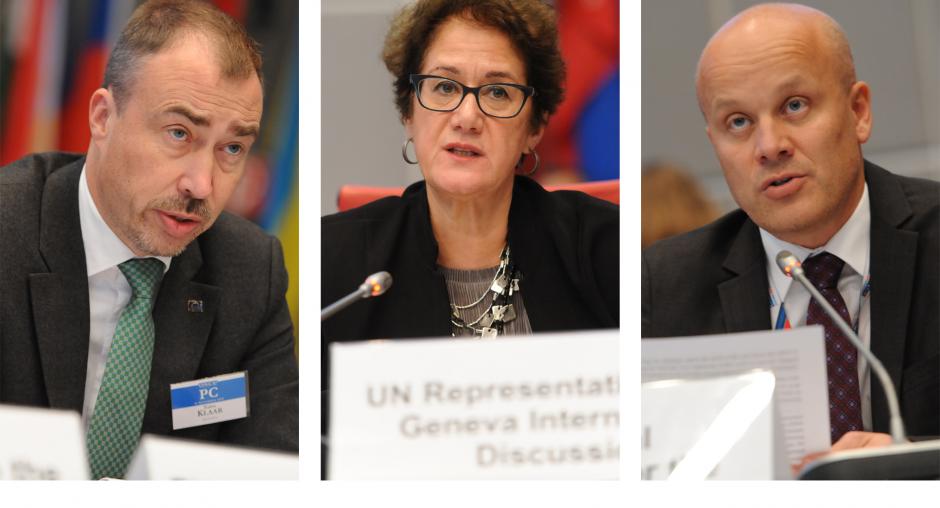 Russia’s military invasion of Georgian territory in 2008 violated international law and flouted the principles enshrined in the Helsinki Final Act, including sovereignty, territorial integrity, and the non-use of force.  This cannot be viewed in isolation and is a symbol and an activity of Russian foreign policy.  We are reminded of the similarity between this activity and the illegal activity in Crimea, which we will address later today.  We encourage the OSCE Ministerial Council to hold discussions on steps to resolve this conflict, restore Georgia’s territorial integrity, and remove this threat to regional security, particularly at this very difficult time.

Your task, Representatives, to move this conflict towards resolution, was never an easy one, and has been complicated by the global Coronavirus pandemic.  We are disappointed Russia and its proxies have used the pandemic as a justification or an excuse to postpone the quarterly Geneva International Discussions.  I’ve listened closely to the reports of the three Representatives here today and the great emphasis on the Coronavirus, but the pandemic cannot become an obstacle or block to the settlement of these political and military challenges that we are seeing throughout the OSCE region.  The United States values the unique role of the Geneva International Discussions format in pushing for implementation of the six-point ceasefire agreement and in maintaining security on the ground.  We urge all Geneva International Discussions participants to join the 51st round of the discussions on December 10-11, following the 2020 OSCE Ministerial Council.  The activities of the Russian Federation in this matter must be viewed in the big picture of the policy, activities and goals of the Russian Federation.  It is not to be viewed in isolation.

In this case, the United States urges Russia, as a party to the conflict, to withdraw its forces to pre-war positions per the 2008 ceasefire agreement and to reverse its recognition of the Georgian regions of Abkhazia and South Ossetia as so-called independent states.  South Ossetia and Abkhazia are a part of Georgia and the future of those citizens will be better as a part of a real country, that country being Georgia.  Russia’s provocative actions are an attempt to extend its influence over the occupied territories and to isolate inhabitants of the territories from the rest of its native country, of Georgia.  This aggression continues to have a direct and negative impact on the well-being of the conflict-affected populations on both sides of the Administrative Boundary Lines.  In particular, we call on Russia and the de facto authorities to release detained civilians, including Zaza Gakheladze, and to restore movement and access to emergency medical care across the Administrative Boundary Lines.  Those responsible for the killings and arbitrary detentions of Georgian citizens will be held accountable.

We would welcome the reestablishment of an OSCE field presence in Georgia capable of operating unhindered across the Administrative Boundary lines.  An OSCE mission with full access to the internationally-recognized territory of Georgia is necessary for advancing opportunities to reduce tensions and support local populations.