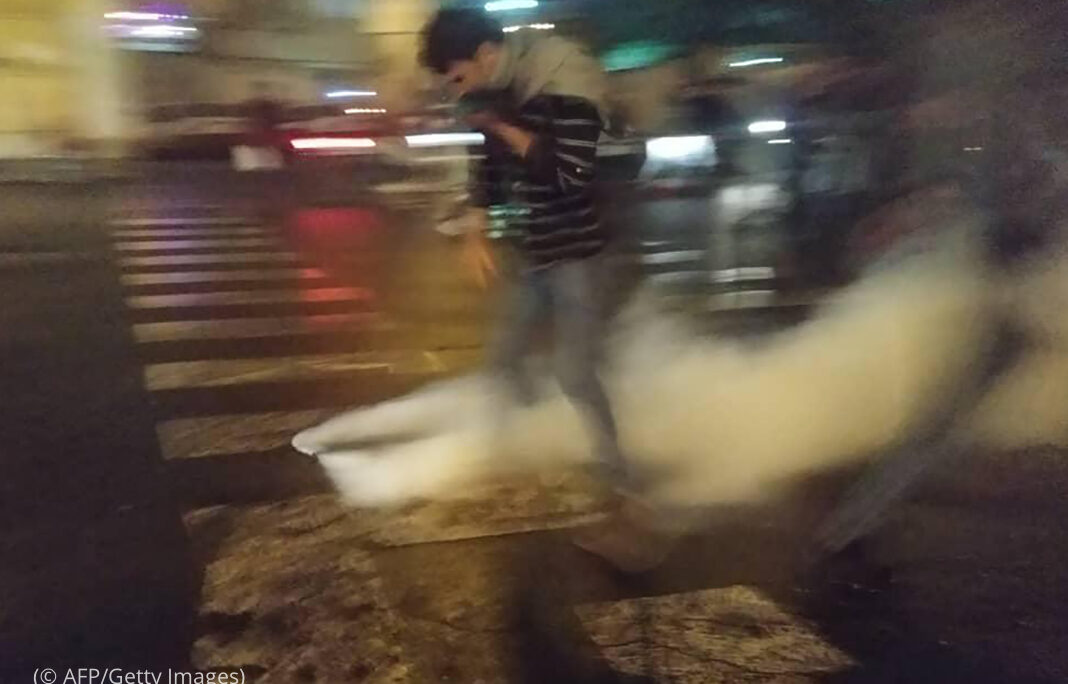 An Iranian protester covers his face to protect himself from tear gas during a demonstration against an increase in gasoline prices in the capital Tehran, on November 16, 2019. - One person was killed and others injured in protests across Iran, hours after a surprise decision to increase petrol pric

Human rights advocates continue to expose the Iranian regime’s violent response to nationwide protests in November 2019 despite the regime’s attempts to cover up the details.

More than a year later, the United States and human rights organizations are still calling for an independent investigation into the brutal crackdown.

Justice for Iran, a human rights organization based in the United Kingdom, published a report on November 13 about the violence against protesters in Sirjan, Kerman province last year.

Security officials used lethal force during protests in Sirjan, injuring several people and killing at least one. The Iranian government conducted no investigation into the use of lethal force.

“Justice for Iran’s thorough examination of all 24 videos from the protests in Sirjan, taken by individuals present at the protests and posted on social media platforms, provides no evidence that the protestors were in possession of arms or posed any threat to life as claimed by the authorities,” the report states.

On November 15, 2019, Iranians began protesting a spike in gas prices. The protests continued for several days and expanded to include calls for constitutional reforms. As many as 1,500 people were killed.

Amnesty International’s report, A Web of Impunity, includes a detailed list of the 304 victims it confirmed had died during the crackdown. The site includes a photo library of the victims and their causes of death.

Amnesty International called on Iranian officials to publicize all information about individuals who died during the protests. The report recommended that Iranian officials conduct an independent investigation into all the deaths and a related internet shutdown. The group also called on members of the U.N. Human Rights Council to conduct an inquiry into the killing of all protesters.

“One year on from the protests, the Iranian authorities persist in their refusal to conduct open, independent and impartial investigations and ensure accountability,” Amnesty International said. “In fact, top officials have openly praised Iran’s security and intelligence bodies for their role in the brutal crackdown.”

As the protests spread, Iran’s leaders shut down internet and cellular service November 16, 2019, to suppress information about the protests and prevent protesters from documenting violence by security agencies.

In #BloodyNovember 2019, an internet shutdown in Iran gave security forces free rein to kill more than 300 people with impunity. Internet shutdowns must never be used to hide crimes and human rights violations. @khamenei_ir’s web of impunity must stop! https://t.co/Dvt9IbWnsE

Internet service was gradually restored five days later, but many cellular data providers’ service did not return until November 27, 2019.

“The Iranian regime tried to hide the evidence of its brutal crackdown through censorship, intimidation, and the digital darkness of internet shutdowns, and still refuses to allow independent investigations into the killings it perpetrated during that fateful week,” Secretary of State Michael R. Pompeo said November 15 on the anniversary of the atrocities. “But we will never forget the regime’s victims.”